I’ll be making a thing

a story… and lots of empty space 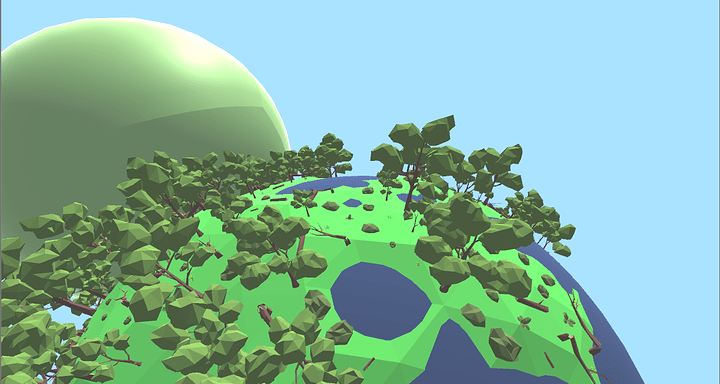 Unity?
I tried something like that and couldn’t figure out the gravity thing for the life of me…

you mean simulating gravity around a sphere or having pathfinding on a sphere?

simulating gravity around a sphere

That… I did some stuff and everything was wrong and didn’t work properly.

have a look at this one, if you add the ability to jump you’ve got your basic walk controller.
CameraController.zip (1.2 KB)
you should probably edit out line 51

Thank you, but that project was the one that completely turned me off of 3D… Now I only do 2D. Much MUCH easier and most importantly - I know what I’m doing

PS: What is the general idea of your game?

kindof a choose your own adventure with 3d graphics. you basically follow a rock through space. planets are just decoration.

I’ll be watching this thread then.

Well I’m pivoting quite a bit; turns out what I had in mind there was a little too ambitious for the moment so I started something else, an exploration if you will: 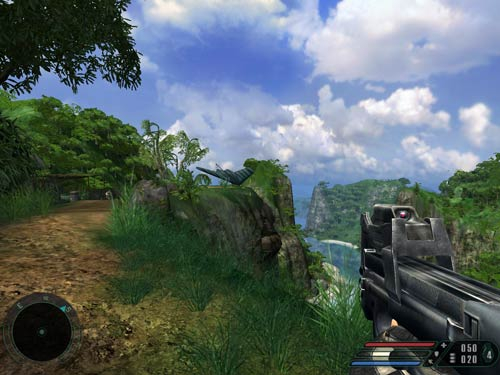 I don’t know about you guys but Far Cry had a pretty big impact on me back in 2004. It was visually appealing and had an editor packaged on the game disk, the Cryengine Sandbox beta; the thing that really got me into this whole “computers thing”. 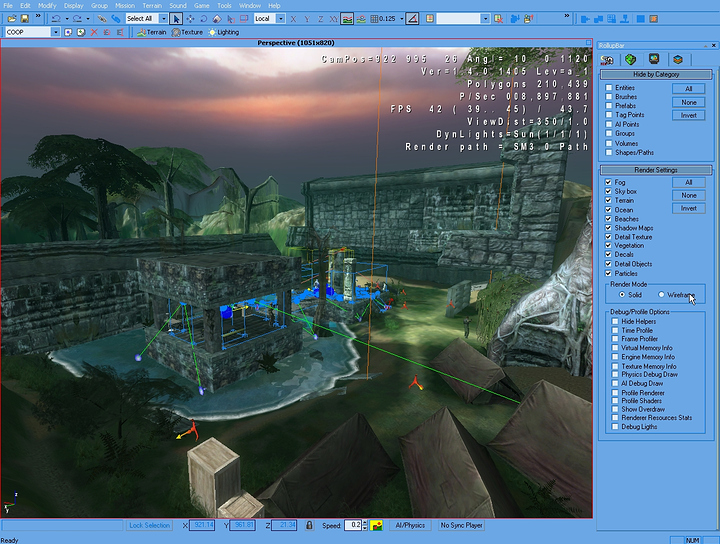 Now, 15 years later I wanna see what’s possible again… I’m even downloading the latest CryEngine as I type this lol. Turns out it still exists and is on version 5 right now.

My goal is to make some nice looking islands. That’s it really. So to achieve that goal I started by going on google maps and finding a group of small-ish size and shape. What I found were the Balearic Islands next to the spanish mainland. 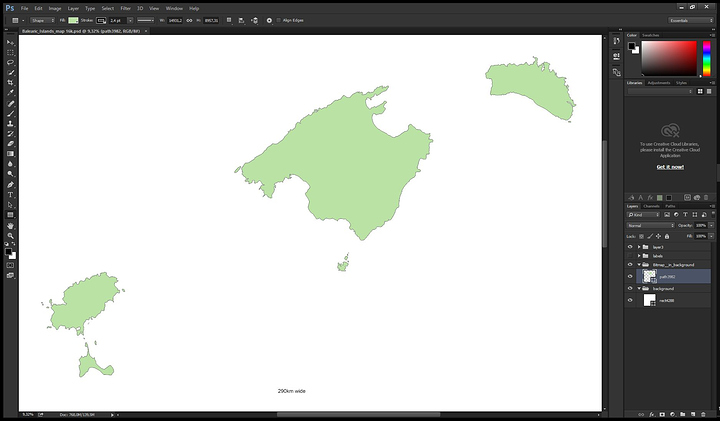 image.jpg1874×1096 248 KB
The next step was to get myself a vector graphic of it, scale it up to something reasonable like 16k and get that into Worldmachine where I rebuild them with the integrated shape/spline tools 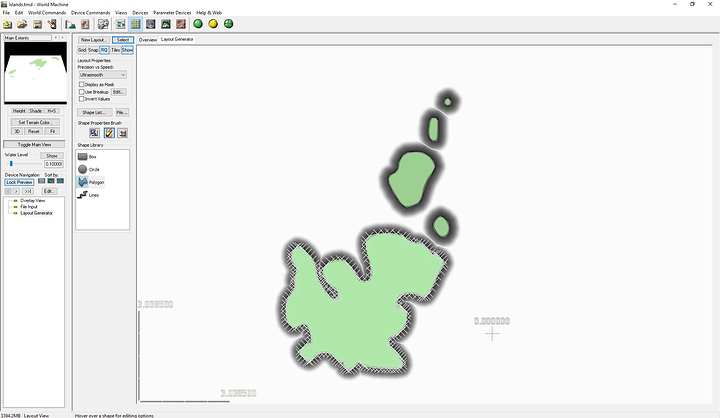 aaand that’s where I currently am… turns out they’re about 290km wide, so rebuilding them at least close to their original shape takes time. I’ll get back to you with more islands.

Are you planning on pulling topography data from the original islands for your height map, or are you using them more as a canvas?

Great posts btw, I’ve recently been getting into 3D modelling, though I’ve been using JME3 and LWJGL instead of Unity.

They’re just a canvas, a jumping off point if you will. Since I want to have the erosion sediment maps and whatnot for texturing, I’m going to simulate rather than take the realWorld data. In the end that should give me a better result.

JME3 and LWJGL don’t ring a bell, there’s so many acronyms.

Learned a few things… Cryengine and Lumberyard can both only realize terrains up to 8k in resolution… which is a bit small if you consider that even just the island of ibiza is 60km across.

So, gotta find an engine that lets me do what I want to aaand just to not be crazy I decided to go with smaller islands. I picked hawaii, since that’s a bunch of hopefully small enough islands.

Another reason I decided to go smaller was the ram requirements when trying to render something of these extents… would have taken 110gb of RAM… soo, yeah.

Lol yeah, there is. LWJGL is the Lightweight Java Game Library, it’s basically a Java library that allows for OpenGL calls, among other things. JMonkeyEngine3 is an open source game engine that utilizes LWJGL, and it’s… okay.

Last weekend I lost myself in technicalities again, your suggestion sparked something and I actually went and learned about real world elevation data and whatnot… pretty interesting things we can do with lidar nowadays

The short of it is, I found a good resource: https://viewer.nationalmap.gov/basic/ where you can get up to 1meter resolution elevation data of our planet… but the best thing is; you can preview where what resolution is available. 1/3rd arc second resolution for example (3m) you can get of most US places, 1/9th (~10m) of most of the planet.

If you want to convert stuff into other stuff this one turned out quite usefull: https://mygeodata.cloud/converter/ and http://opentopo.sdsc.edu/ gets an honorable mention for having some good map data.

Edit: Here’s a python based img to bitmap converter https://github.com/MacroPolo/real-terrain

AaaaaaAAAAnyways… this weekend I’m going to approach it like I do my other crafting projects: I pick a target and figure out how to get there.
Target: Do the Bob Ross
How to get there: Make Mountains, add happy trees

So since Speedtree seems to be free for lumberyard engine, I’m going to check that out, see if i can get the new version running. Didn’t have much luck with this engine in the past.

Alright, seems like I still got a bit of Bob left

Back in the day something like this would have taken me quite a bit longer. With all the fancy weathering effects and whatnot calculating as compute shaders, it’s amazingly fast. no more rendering for minutes to see a little change, and adjusted slope or a height… nope. pull a slider, watch it change. amazing. LOVE the future!

Hmmh, it’s a nice application but not all that finished yet. I’ll be trying out Gaea next, will let you know how that turns out

Aaaaalrighty, here’s an “update” and a “letter of intent” if you will… just so i can’t kill this project without anyone asking where the body went

Over the last few years I’ve built a lot of systems, prototyped many ideas and sometimes straight up ran into a creative wall.
Then, a little while ago, something weird started happening. I had another idea.

So it would seem like I’m going to be building, at least until I see another bright shiny bauble, a crpg. Yep, a moldy, oldy 2D shoot n’ scrolly.

You wanna know what brought it all together?! The plants. The spice is essential for space travel. I’m talking about harvest moon or it’s most recent younger sibling stardew valley of course.
Now… Imagine that, sprinkle in some guns, set it in space, command a group of 4 explorers with a fixed homebase some funky worm-holy physics and suddenly you’ve got yourself a Mass Effect/ Sliders/ Stargate Game.

Mind you those are just parallels and any resemblance to any of these IPs is purely coincidental. At most I was “inspired by”…

naaah on a serious note tho, if you liked Sliders and SG this game is gonna be your jam.

The Game starts in a familiar place. Home if you will. Your team of four will get an assignment to venture out farther than anyone before them ever has; With the possible peril of this being a “one way trip”. Of course. The team leader refuses, exposition… They decide to go. Maybe there’ll be one/two missions in the “known world” first, with backup both personal and technological for greater contrast later.
So now they embark and cross the threshold to the unknown. Little information about this place has made it to them but the rewards must far outweigh the potential costs. After all, anything else would be madness. Madness I tell you.
They arrive in the new place, to find out it was indeed a one-way trip. But something else is up with this place. Something restricts them in movement to the inside of their base and may hamper their ability to expand beyond a central area. If it’s planetside it might be a toxic atmosphere, submarine, vulcalic winter… if it’s in space, well it’s space. This will require them to manage their resources differently. No food from the planet’s surface, no easy outs. This “back to the wall” funnel means they will have to stabilize their base and venture out using the mechanic that brought them here; exploring an alien verse, encountering creatures, cultures and creating comforts. Extending their base/their ability to hold more of it, opening up new abilities and aspects of the game while also lowering the priority of repeating mechanics from the beginning of the game and extending the scale each step of the way.

This is gonna be a single player rpg, in 2D.