This article comes straight from toms hardware, and is really epic to think about. Im excited 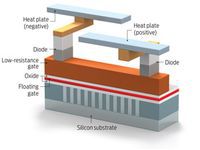 Few users may have ever reached the end of life of a flash drive, yet we know that mainstream drives can, realistically, not exceed 100,000 read/write cycles and many cheap flash drives are even rated well below that.

If you are willing to spend money for a high-end drive and a focus on durability, you can approach up to 1 million cycles. However, that's not so much on for a server drive, which may endure more than 1,000 cycles each day.

For extreme cases, there may be a new technology that claims to extend the lifetime of a flash drive to more than 100 million cycles. Even if you were to write and erase data 1,000 times per day, such a drive would last 274 years. Engineers from Macronix developed the technology and said that even 100 million cycles is not the real end. They simply didn't have the resources to test the memory for 1 billion cycles as it would take several months.

The improvement to flash lies in adding onboard heaters to small groups of memory cells, which can in turn heal flash memory cells that degrade over time. In fact, flash memory makers are facing a substantial challenge as this degradation accelerates with smaller cells. However, Macronix said that briefly heating the cell to 800 degrees Celsius can entirely heal the cell, prevent degradation and returning the cell to full operation.

There was no information when the technology could be commercialized.

Companies that integrate that will now have to pray for customers to loose them to get them to return. ;)

800C sounds like the bloody drive will glow in the dark! That sounds like a whole lot of power required to reach that kind of temperature if even only for a short period of time.