Is it possible to clone my source drive to a user selected partition on the target drive?

The target drive has two partitions, the first containing some data & the second partition being large enough for the cloning procedure with a tiny bit of space left over for whatever reason it needs to be there.
The target drive has just been backed up, but I do not trust backups 100% without the right software.

Do you want to clone just for backup image or start booting from that image?
EaseUS has some software that I used to move my Windows 10 system to an ssd and I feeel like this should be something you can do.

Cloning so I can boot from the clone at a later date (on the same system). I'm doing this for the sake of keeping data seeing as I have the space and don't want to delete the old OS, and if something happens to my current install, at least I have something to fall back on.
I want to completely wipe the source drive once it has been cloNed and use it for storing video files for editing. My workflow on another system was 2 SSDs, one for OS one for media. This will be the same. Whilst this setup is not the highest performant, it is the most simple to maintain and gets job done well enough.
I have the original install media this is not OEM copy and no piracy or violation of the EULA is being conducted by cloning the drive, as the copy becomes the original when the drive is wiped. (and dear god it would be 10x easier just to torrent the shit if that's what I was trying to do)

[EDIT: The post below is doing exactly what I want to do. Off to learn a bit about image cloning. If anyone knows what that is or if I am doing anything stupid...] 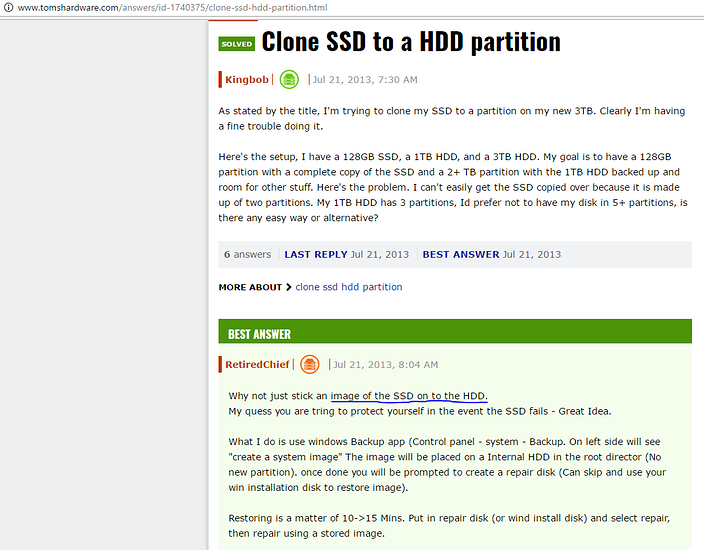 You can clone a drive to whatever.

Using a linux boot media, you could do something like this:

dd if=/dev/sda1 bs=8M | gzip /mnt/backup/images/backupsda1.gz
where /mnt/backup is mounted to your target drive, and the file is located in the images subdirectory.

This will also gzip the backup at the same time.

this wiki will help
https://wiki.archlinux.org/index.php/disk_cloning

In addition to that, I will just drop this here:
https://wiki.archlinux.org/index.php/disk_cloning

check out the clonezilla project, it does a good job at handling microsofts retarded FS booby traps.
It can handle partition to partition, disk to disk, disk to image, and so on, it really does a great job at cloning basically everything, cloning/backup wise.
Even the images you storage on a local disk are compressed and what not. e.g. a 250gb ssd drive doesnt take up 250gb storage for a snapshot, but rather what ever the drives actual content compressed would take up.
Id take a back up of the target drive first though since its allways fiddly to tinker around with partition tables and so on, and sometimes data goes poof.

I have a system image of the HDD (according to the internet). I've no certainty the drive is bootable but that's ok, the drive is needed for something so it'll be wiped now. Fingers crossed haha!

Windows has a built in drive imaging program called System Image Backup to back up C:\ (boot). Completing the clone 48 hrs ago I was unsure about wiping the source drive, fearful the clone on the target drive would not be bootable. I have accepted this risk and decided to wipe source anyway.

My experiences:
- Acronis does not support (or I couldn't figure out how to) clone my C:\ drive to a specific partition on Target Drive. It would clone from Source Drive to the Target Drive, and refused to leave any data on the target drive alone. Implying it would format the entire Target Drive ignorant to any existing partitions.
- Windows' System Image Backup program is good enough for the average consumer
- None of these software serve all of my needs well. I will assume I am a power user hence this, however I'm not exactly the most experienced computer user, and I seem to be meeting limitations in my operating system already. Are there workaround I am not aware of. For example checksum and diffcheck/checksum verification - where is this function? Does anyone know of any software that does this?

Thanks for the assistance. These Linux recommendations are great. I've got them written down as the next things to try in my Linux Experiments (really a novice in that arena).