So I’ve run into an issue when trying to watch movies claiming that my hardware isn’t hdcp compliant. I have 4 monitors. 3 of them (all 3 are Asus vg248qe) are plugged into my gtx 1070 with displayport cables. My 4th monitor is a Pixio PX325c connected with a DVI-DL (DVI dual link). When i go into nvidia control panel to view hdcp status and select the pixio (white monitor icon with “DVI” written underneath it) it says “this display does not support HDCP”. So obviously this monitor or possibly cable is the issue. Before i purchased this monitor i did email pixio and asked if it would be hdcp compliant via a dvi-dl and they said it was. I had to email them though because the online manual mentioned nothing about hdcp. So did they lie to me or could it be the dvi-dl cable i bought that is the issue?

The reason i’m using the dvi-dl instead of the superior displayport on the pixo is because all of my displayport outputs on my 1070 are being used by my asus monitors. I know i don’t get the hdr benefits via dvi-dl but i don’t really care. I only bought the pixio for its size, price, and the 144zh factor. All 4 of my monitors are 1080p at 144hz. I need them to be the same refresh rate because when you have monitors with different refresh rates you sometimes get stutters when dragging windows across your monitors. They all have the same inputs as well. dvi-dl, displayport 1.2, and hdmi 1.4. So hdmi is a no go since it will only give me 120hz. That leaves displayport and dvi-dl being the only plausible ports.

GTX 1070 has 3 displayport 1.42 ports, 1 DVI-DL, and 1 HDMI 2.0b port. So what are my options for getting all 4 monitors at 144hz and be HDCP compliant? I haven’t found any adapters that would go from hdmi on gpu to displayport on monitor.

One wierd thing i almost forgot to mention when i first plugged in my pixio monitor with the dvi-dl cable there wasn’t a 144hz option. I could only select up to 120hz. i had to make a custom resolution via nvidia control panel to get 1080p at 144hz.

I literally just posted the other day this thing: 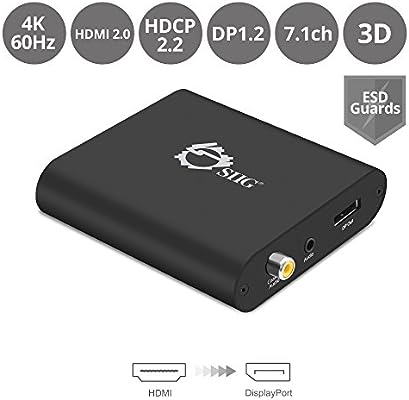 I appreciate the reply mate. I might just pull my GTX 1050 from my back up rig since that would hurt the wallet less. LOL. Thanks though. Its weird i was searching online and couldn’t find anything like this. Everything I found would go from displayport on the computer to hdmi. Good to know there are other options.

Actually amazon has that exact thing for about $50 less right now.