Any recommendations for a hd? I'm eyeballing the WD Re 1TB: http://www.newegg.com/Product/Product.aspx?Item=1A0-004M-00057 Mostly because of the 5 year warranty. It's just for home, 2-4 computers. I made a pfsense box before with a seagate, it didn't last very long. With the new video it made me want to revive the box.

I would go for cheap, old, or 8GB thumb drive

Sorry, I forgot to add that I planned on adding as many packages as possible including caching.

Caching is for a corporate environment where 100+ computers are all downloading the exact same windows or software updates.

I have a stack of 2.5" drives that grabbed one from. I think it is a 250gb black and loaded, snort, PfblockerNG, nTopNG, & NMap

Well, it's decent if you keep accessing the same sites over and over, like for instance I vist a lot of Art websites, so it caches all the images what is super handy as my internet isn't the best. So it's nice and snappy.

However, if you can I'd personally go for a SSD unless you really want all that space. Reason being how Squid works it will re-write and delete data on the HD (depend on your config, but you'll probably want it on LRU caching for the main cache) also with -1 on the Finish transfer if less than x to -1 so it'll cache everything, that's if you want it to do that, that is. It'll re-write to disk over and over, this can kill Hard Drives pretty quickly. So personally I'd opt for SSD so it'd not die as quick, and you'll also get a decent speed bump.

Again it'll depend on what you want from the cache.

I have a 80GB Seagate drive in mine that I believe is over 10 years old at this point, and it still works with no S.M.A.R.T errors. it is a Seagate Barracuda 7200.9 ST3808110AS which was pulled from my old Pentium 4 computer. 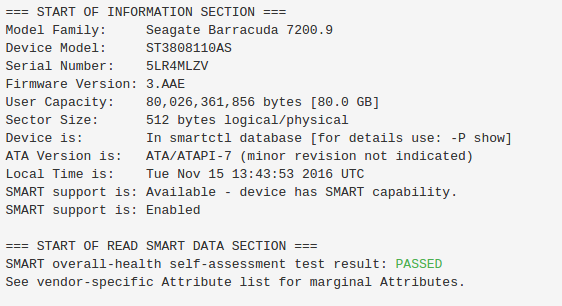 Yeah, it depends on what kind of caching you're doing as well. But I kinda feel like hard drives when it comes to this kind of things are ticking time bombs more then usual, you know?

Any recommendations for a hd?

I'd go for reliable.
Rebuilding your pfSense box is a chore. Reliability is key. Maybe you can find a deal on a smaller enterprise SSD. You don't need a lot of space, even with Squid, Snort, and any other goodies. 16GB is enough. 32GB is overkill.

I use a small ssd, faster, more reliable, quieter. You don't need all that space, my 120gb ssd is even overkill but it was a good price.

I know, the only reason I'm using it is because I had it laying around doing nothing and didn't want to buy a new drive for it, plus if it fails I can always restore the config backup and be back online within 30 minutes.

Interesting, I didn't expect these answers. Well good news is I probably don't have to buy anything then. I have a 60gig sata 3 ssd barely used, and an older but also barely used 160gig hitachi hd.

Thanks for the advice.

Also forgot to mention cheaper, SSD should use less power.

60GB is going to do you fine even if you use caching, which you might not want to as to be effective you'd have to MitM your connection.

I'd be nervous about using an SSD on a pfsense build unless it was an SLC cell based drive which are very hard to come by these days. With the packet inspection alone you're going to have a high number or reads and writes to the drive. If you add in caching and other packages, well you're just asking for an early death.

Honestly an 80GB HDD is more than enough, even for a high capacity caching server (depending on user load of course.)

Your living in the past. What kind of issues so you expect to see? For one why would it be writing to the ssd and not ram? Even with writing to the ssd were talking hundred and hundreds of TB of writes before you might even notice anything.

I like living in the past...It's where I grew up.

Seriously though...It's not worth it to me to take the chance. Spinning rust works fine and honestly the speed boost isn't huge enough imo.

Seriously though...It's not worth it to me to take the chance.

You trust a mechanical drive spinning, generating heat, with slow access time (single most critical spec for web caching), over a SSD? And not even a good hard drive - a shit tier 80GB drive. Dude. You're not living in the past... you're delusional.

$60 for a SAMSUNG 750 EVO 120GB SSD. Way overkill, but Samsung pretty much owns the market. They own the market because their drives are excellent.

Get over your SLC superstitions.

In my pfSense box I picked up a pair of 150gb WD velociraptors dirt cheap on ebay, I have them in a raid1. Something like that will be reliable for 24/7 use hut before that I had a 1tb Seagate barracuda and that didn't have any problems either. So I wouldn't stress too much about it.

I've heard that older generation SSDs ran in to problems with dying after a month or so but more modern ones seem to work okay, but you won't see a meaningful performance increase form using one even in caching as the small files that would benefit from an SSD are already stored in ram.

Ya doesn't your OS cache images? Plus with the general performance bump you get with PFSense, it may have nothing to do with cache. I only went with a 250gb HDD was because it was lying around.

Oh yeah sure. Fyi I have a few packages, Ids, rdd graphs, and logging turned on. I'll be sure to come back to you and report when my ssd dies... In 15 years or more.

Sarcasm aside :). That thread was 90% crap when it was made 5 years ago let alone now. I could write to an ssd constantly 24 hours a day as full write speed and it'll not fail for years and years.