Haswell is almost 2 years old now. What this means to the cpu world

The i5 4690k ($190) Haswell refresh is a great part in my opinion. Running one now at 4.6Ghz on air cooling and stays <60˚. Not sure when this will be obsolete, considering how long the 2500k lasted as a desktop option. The 5960X doesn't seem like it's going to be obsolete anytime soon though.

I'd try getv if you can get it to install on it, It only had a 3.2ghz i5 has the recommended requirements you'd probably be fine. Heck most of the 920 I have seen are clocked at 4ghz or just under so you've still got some room if you want to get more from it.

Yeah I don't have the most amazing 920. so to get more out of my chip id have to over volt it.I could probably get 4.0 to 4.4 out of it with a some more volts but I never saw the need since it has yet to hit a wall @ 3.4GHz. I don't own GTA 5 yet(was waiting for it to hit 20$ during the summer or winter sale) so I cant test that game yet anyway. so unless some one wants to buy GTA5 for me now I wont be testing that one for at least a few months(I'm really joking here. I wont allow anyone to buy me GTA, because me not buying it is not because I don't have money for it)

My 780s are in a custom water cooling loop unfortunately. I would have to drain and then put the stock coolers back on. so I don't see me testing the i7 920 with these 780s again for a while. or even testing any other GPUs with my i7 4770k PC since its part of the same loop.

So if anyone wants to see a specific game (other than GTA5 right now) they want to see tested between the i5 3570k and the i7 920 let me know. I also have a Pentium G3220 I can add in there just for kicks, only thing with that is it does not support SLI. since most of my testing will be SLI I don't know how exciting it would be to see. I can also run these test on an old AMD 4800+ X2 to really show people what a CPU bottle neck really looks like.
thinking of something like "this is what a GTX 660 plays like on an old dual core, a new dual core, an old quad core and a new quad core."

What do you mean intel is running behind on broadwell? It's for mobile and embedded space. Skylake is the next server and desktop platform. Did you allow the tech journalists to poison your mind into thinking broadwell was for desktop?

@Reactable
Pretty sure he means that Intel is behind schedule on a full product release of Broadwell. They were supposed to be shipping by Q4 2013, but didn't appear in any way until Q4 2014.

They did delay it because of problems getting 14nm working. But yeah it is for mobile not desktop. I hope skylake brings some decent improvements over sandy bridge finally.

They have a full product release. Scroll down to intel 5th generation. If you actually read my comment you'll notice the words "it's for embedded and mobile cpus." That's what you will see when you click the link. Enjoy! :)

Keep your snide and condescending demeanor to yourself, thanks.

To answer your statements, Intel has not shipped any of the socketable Broadwell chips that Brian Krzanich mentioned in 2013. They have a full mobile release, (although most of those CPUs have not found their way into OEM designs yet) but as of yet no other market has Broadwell.

Does it seem like I'm ignoring your "mobile only" statement? That's because it's a fallacy. There will be desktop Broadwell-C chips for 9-series boards. Board partners either have, or are about to release updated support lists for the new chips. 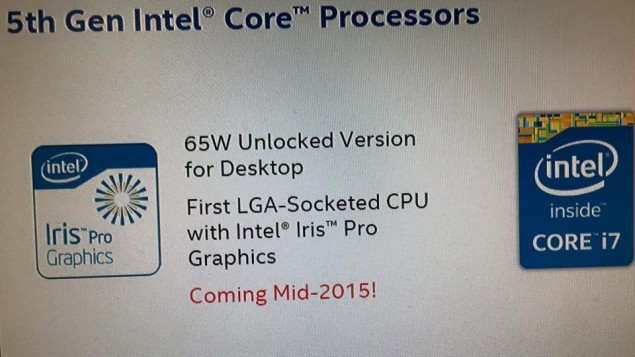 I've heard of rumors of Skylake landing before the end of this year possibly beginning of Q1
Knowing it's a Tock I'm not caring too much about the tick that is broadwell.

i dont realy understand why intel is even botter to launch broadwell,
i wished they simply came with skylake, and just skip on broadwell.

Then people that bought z97 boards would be pissed. lol

Even if the CPU is nothing different, they have to release something (anything) for the z97 socket, before they kill it off.

Intel probably could have launched SkyLake by now if they felt any pressure. They can release broadwell in a month, sell them like hotcakes, and then launch skylake months later while still making boat loads of money. At this point Intel has so much money and is so far ahead of anything AMD has put out that they don't have to innovate to stay afloat. They can sit and make little 5% IPC improvements without fear AMD can do anything to push them to do more. Intel's engineers can do what Nvidia let there Engineers do and just go take boatloads of paid vacation days, because why not.