So I managed to set up webserver using FreeBSD and Nginx. Might as well document the process here. This post is more collection of good resources and guides I found online. Most guides linked here won’t just spam you with commands, but also tell you what those commands do, what different variables in config files stand for etc. Hence I won’t start rewriting everything here again, since those guides are already doing better job at explaining things.

This guide will not explain how to set up your own domain, but if you need help with that this guide gives good starting point.

I’m not network guru or battlefield hardened sys admin, so what I did here might not be the most safest, reliable or smartest way to accomplish this. Just keep this in mind while reading further.

I must use the opportunity for shilling Digital Ocean here tough, they have really good community guides for setting up services so I highly recommend testing them out.

I had no experience at setting up and configuring web servers but it wasn’t difficult with Ubuntu, thanks to the guides provided by Digital Ocean community.

I did set up web server using Ubuntu 18.04 droplet few moths ago, and the process was really similar with FreeBSD. Major differences were:

Take these steps in this order when you are setting up your web server. Doesn’t matter if it’s Linux or FreeBSD you are using.

Ok so let’s get our hands dirty now.

If you use some other hosting method ignore these steps and follow the instructions from your hosting provider.

Choose the image, in this case FreeBSD 12.0 with ufs. 1GB/1CPU should be more than enough if you are only going to run web server, but pick what fits to your budget. If you wonder why ufs and not zfs, to my understanding zfs is more resource heavy file system than ufs. Since this is going to be basic testing and web server for me I didn’t see any benefit of using zfs.

You also need to set up SSH key. And remember to change the host name if you want to have some more descriptive host name for your droplet. 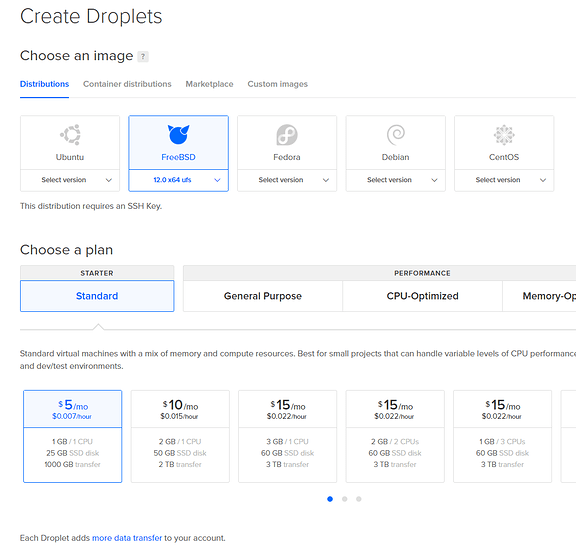 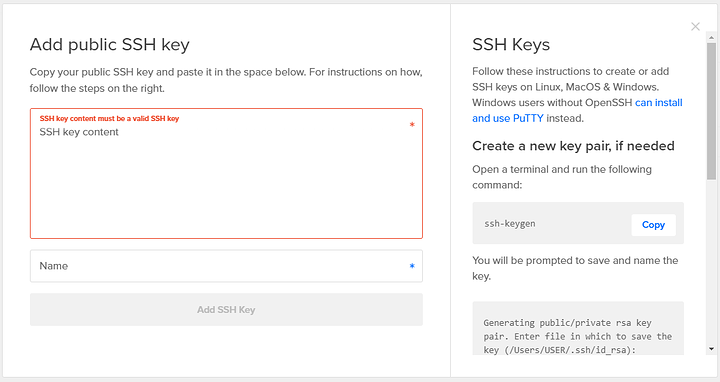 Follow this guide. Instead of ee editor I installed nano and used that for editing config files. Nano can be installed with the command sudo pkg install nano

Remember also to set the root password with sudo passwd command. If you accidentally lock yourself out form the droplet while for example setting up the firewall, you should be able to access your droplet through the droplets console in your Digital Ocean dashboard. I personally haven’t tested this though.

You can skip the setting up Bash part, but since that is the shell I’m most comfortable at using I went ahead and used that.

This guide explains how to set up ipfw firewall. FreeBSD offers few different firewalls but based on that guide and my limited research ipfw should be enough here.

I didn’t bother to set up timezones and I also didn’t mess with the Swap file, but feel free to do that if you want to.

If you are not planing to use https and don’t use SSL certificate then you can leave port 443 closed.

Like stated above, I used Nginx, but Apache should work fine as well. This guide is for installing Nginx for FreeBSD 11.2, but all the steps in that guide worked for me, except setting up firewall since we already did that.

Remember to edit your rc.conf and add nginx_enable="YES" in that file. That way FreeBSD will start Nginx service at startup if you reboot your server.

If you run Digital Ocean droplet there’s going to be some other lines too, but since I have no idea what they do let’s not touch them.

If you now try to type the ip address of your web server to your web browser, or your domain if you have already pointed it to your server, you should see the default Nginx welcome page.

While not necessary I did set up separate server block for my site. Process for setting up the server block was almost identical to Ubuntu config I did few months ago. Only thing different is the directory structure the FreeBSD has when compared to Linux.

This was the only guide that I thought was bit sketchy. It wasn’t bad, but if I understood right I compiled the whole Certbot that is used to get the SSL cert from source. I haven’t done any research about this but I think there should be precompiled Certbot package for FreeBSD. If you compile the certbot from source just hit enter and go with the default options while compiling.

If you want to use both www.example.com AND example.com domains remember to create DNS record for both. When certbot asks if you want to redirect all traffic to https I chose yes, but feel free to select what you feel is the best option.

When creating cron job note that it will most likely open vi text editor for you. I tried to figure out why with @AnotherDev but no luck. Just remember vi has slightly more complex keybindings for controlling it when compared to simpler text editors like nano, ee or pico.

Now you should have web server up and running.

Lastly much love for @AnotherDev for pointing me in the right direction and helping out with this. If someone sees him give the man a hug.

- Shoutout for humbled services to a companion in need

Good to see it worked out for you

I haven’t done any research about this but I think there should be precompiled Certbot package for FreeBSD.

I think you can install it with Python’s pip, but don’t quote me on that. I agree with you I think there is a repo for it.

Phase II: You can setup a VPN or forwarder to get ssh off public facing if you’re worried about it

If you accidentally lock yourself out form the droplet while for example setting up the firewall, you should be able to access your droplet through the droplets console in your Digital Ocean dashboard. I personally haven’t tested this though.

Yeah, you can access the console via VNC meets browser. You can also hard reset the root password (Digital Ocean will reboot your instance, though) and you’ll receive an email with the new password.

I think you can install it with Python’s pip

Considered trying that, but decided to just roll with the guide.

Besides isn’t it the sign of true alpha male who compiles everything from source?

Phase II: You can setup a VPN or forwarder to get ssh off public facing if you’re worried about it