In my computer i run a gtx 970 in the primary PCIe X16 slot and a GTX560ti in the third PCIe x16 slot (they run at x8 gen2 so there should be no issues there). But i have noticed that CPUz reports my gtx970 as having 1gb of ram when it should display 4 and it says the 560ti has 4gb of ram when it should display 1gb. GTA4 also is having issues with the RAM allocations as well (its sees that there are 4gb but refused to use them until i added target options telling it to ignore vram). But other games such as Far Cry 4 have no issues at all.

I have also noticed that while Far Cry 4 runs really well other games such as GTA4 and BeamNG don't run much better than they used to. Which is odd considering the card is twice as powerful.

The reason i have the 560ti in my PC is to speed up blender cycles rendering and it also has the slight added bonus of being set up as a physx card for games that are happy to use it for that when not rendering.

Does anyone have any idea what is going on and how i could possibly fix it? 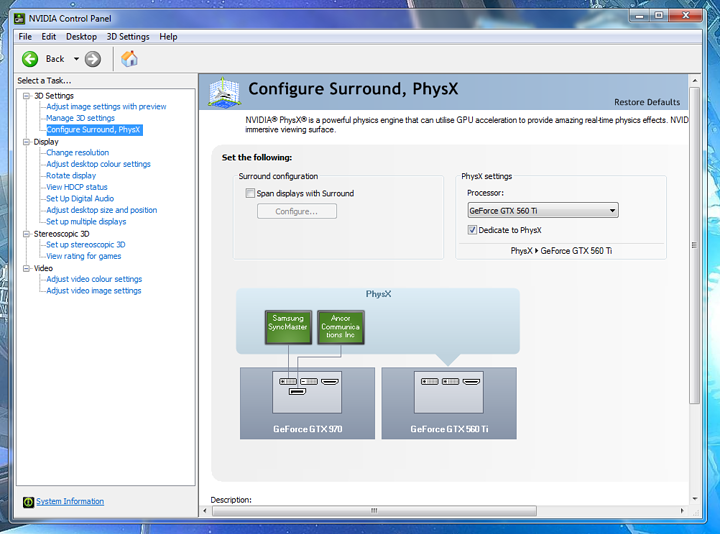 GPU-z correctly shows all GPU data with correct ram amounts etc so is nvidia inspector. I have been doing a bit of looking around and apparently quite a lot of people are having issues with low utilization.

2500k sandy brdige cpu does not support pci-e 3.0 to start with, so that its showing gen 2 thats normal.

Why do you run 2 diffrent cards in your motherboard? that could never work properly. i assume thats your problem. trow out the GTX560Ti.

Your pci-e bandwith on 8x gen 2 thats again normal, because you run 2 cards. But i have no idea why you want this? i mean, you can´t run 2 diffrent gen cards in Sli anyway.

As i said in my comment i run two cards because i render using Cycles in blender. Blender does not give two cares as to what cards are plugged into your motherboard, as long as they support Cuda it will let you use them. The GTX 970 is approx 2x times faster than the 560ti at rendering, so with both cards i have 3x more rendering power than i used to have.Considering a single image could take up to 20 mins to render on my 560ti having both cards in there will shorten that to about 6 mins, which is very useful. As well as that having two cards means i can set the 560ti to render an image in blender allowing me to game on the 970 (or the opposite if its an older game). That is the reason i run two cards.

They only have to be the same card if you want to use SLI, which i am not using. Then in games i can use the 560ti as a physx card if i wish too. But im not really too bothered about using it as a physx card, but if its there then why not i guess.

So i was originally wondering if the issues i was having in GTA 4 was related to that and how i could make that game ignore the dual GPU config entirely. But i have since learned that the GTX900 series has some pretty bad issues at the moment, in many (usually older but not exclusively) games it is performing about the same as a GTX570 while the GPU is barely utilized for some reason. Hopefully nvidia will fix this eventually.

I just stated the pcie configuration in case anyone thought that would be useful information to know. You are correct, both my CPU and motherboard only support pcie gen 2. Since i have multiple cards in there it is running at x8 x8.

While playing FarCry 4 running at Ultra @ 60fps is really awesome its sad to see that in some games upgrading has barely made a difference at all. GTA4 and BeamNG are perfect examples of that.

ah okay you use both cards for cuda rendering, that makes sense.

Can you disable the GTX560 and then play  GTA4 and BeamNG, look if this does improve the fps? could you also monitor your gpu load during those games, with msi afterburner, and post a prinscreen from it?

Im kinda curious about how your gpu load is acting.

Maybe its a driver related issue. I haven´t realy heard from issues with a GTX970 yet. Atleast not with the latest stable drivers.

It seems to be fairly well documented, i had never heard of it before now. Guess i haven't been looking in the right places before making the post here.

I just hope that nvidia fixes it at some point.

Thank you for the help :)

Thanks for linking those threads. Its realy interessting to investigate ☺