Recently bought an EVGA GTX 970 SC to upgrade my rig. Was not blown away by the performance increase coming from my older 650 ti. I'm getting awful frame rate drops in COD: Advanced Warfare, because my gpu usage often drops to 20% load in this title. Is this a driver issue? Black Ops 2 runs fine. A few other games do not utilize the GPU very effectively either and my framerates are not where I want them to be. ( Dues Ex: Human Revolution, Smite, BF3) Is my system not enough for a gtx 970 or is there a driver issue? Thanks for the help :)

I've done a clean install of the nvidia drivers, and updated the firmware of the 970 to support 0% fan mode as recommended from EVGA. CPU clock stable. does not throttle

Run msi afterburner, and make some printscreens from the gpu load, during those games, and post them here.

i assume you have the latest drivers installed?

Ya, like what are your cpu temps like? It strikes me as the v6 isnt a good enough cpu cooler with that overclock and the added load of a highend gpu. Thermal throttling? Having done a certain amount of research into using a amd 6 core and that cpu cooler, i opted not to use it.

Okay I got some screens to help things out. Using gyazo to screencap so hopefully you guys can look at the i'm a bit of a scrub at forum posting lol.

as far as i look to your graphs 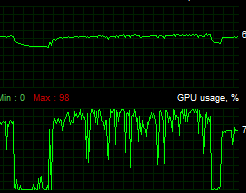 Are you playing multiplayer?

Yep this was from multiplayer. It hits the 90fps multiplayer cap just fine, but i go down to low twenties/high teens for a second or two. Very frustrating!

yes multiplayer is cpu bound, so your FX is bottlenecking you.

your load is bouncing up and down all the time.

Turn off APM in your BIOS, I would say the CPU is throttling, APM is power saving feature that causes this sometimes. Otherwise check you CPU temps for thermal throttling.

Switching APM from auto to disabled definitely improved my minimum framerates! Thank you! :D They are still quite noticeable though so it looks like i might need a different CPU. I bought the 8320 thinking it was last only a few months ago :(  Any recommendations for a new cpu and mobo? Don't need anything too crazy just don't want to be bottlenecked. Hope i can find a deal for black friday. Thanks for all the help!

The 8320 is decent. Just not in single core performance. You should if you haven't get good cooling and OC the shit out of it. Sheer speed can usually overcome some of the lower per core performance. 4.6 isn't bad. But if you can hit 5.0Ghz then it should be only a little bit slower than an i5.

if you realy wanne improve the minimum frame rates in multiplayer and cpu bound games, then indeed an 4690K would be a better bet.

Small update: not sure if this would impact anything, but when playing Call Of Duty Advanced Warfare multiplayer i am actually maxing out my 8gb of ram. Would this cause stuttering? Heres a screenshot of afterburner. http://i.gyazo.com/25039c24be3b11e3517c6c8afe7bfa64.png

What do you have running in the background?

For system memory usage, the OS will use up a ton of memory just to speed everything up (if the resources are available, why not use them?). So when the game starts requiring ram, it is on top of the massive amount that the OS is already using (right now W7 is using 4gb of my 8gb when not gaming). Once you start running low on ram, the non-essential stuff should start getting replaced by the more frequently used stuff, so the game should replace the stuff that the OS was storing on there. You could try starting the game immediately after a cold boot to see if that helps things, but honestly, if it isn't causing a problem, I wouldn't worry about it.

Just chrome and afterburner, steam is open because thats where I have CoD.

I'm currently having stuttering in CoD so thats why i'm trying to diagnose it :)

My Windows 7 never comes close to 8GB of ussage. wenn just gaming. Unless you got tons of tabs open in your browser.