Great now I have to spend at least $150 on skyrim

Now Steam is letting Skyrim Workshop monetize mods and just to get the update to my mods, Now I will have to spend about $150 if I want to get updates for most of my mods. I have hundreds of mods and at a avege min. of 25 cents per mod I will have to spend more on the game then what I bought it for.

Really WTF is up with this!!!! Workshop used to add a buying insensitive to me cause a game could get mass adoption by modders, and now if we have to continue to pay for mods it will no longer be a reason to buy the game.

If modders got money for there mods cause a person wanted to give them money for there work, that is AWESOME but HAVING to pay for a mod is going to make less people want to get them, MODS are not perfect and they can conflict with other mods or just be outdated by a game updates.

So in closing, this is a dual edge sword.

The way i see it is that this will make take pride in their work, so there would be less bug ridden mods. Also, most of the bigger mods work better than the game itself. You could go on nexus and get all the mods for free. Nexus mod manager > steam workshop anyway

I under stand and agree with what you are saying here.

All tough, Steam is taking around 75% of ever dollar that the creator makes

I would pay and reasonable amount of money to modders if Steam where not taking around 75% of the money the modders make.

Steam is taking their usual 30%, and Bethesda is taking 45%.

But yeah, still, it's crazy.

Can you still use Nexus Mod Manager?

Yeah, that bs. They're making money by not doing anything. Pretty much making the consumers make their own content to sell to other consumers for them.

I don't know. I guess only use mods from creators who keep their content free?

If mod creators want to charge for their work why shouldn't they? If its not worth the money they will quickly find they shouldn't charge for it or have a free version and paid version.

The way it is implemented is an absolute scam. If they really wanted to help mods get money for their work they could just have a more advance and easy to use donation system. They would get like 10% for their resource (which is fair), there would be no overpricing issues, no IP problems as the mod will not be monetized (so no bethesda taking most of the money) and modders will be able to get some compensation for their work. That would be a much better system for everyone.

They way this is implemented is just absolutely stupid.

I wish this were true but people on steam buy everything all the time, mods will be no different.
Look at the avatar, emojis, those damned cards, etc.
Regardless of what will eventually happen, this will fundamentally change the Skyrim modding community as we knew it. :(

use the nexus network
skyrim nexus.
http://www.nexusmods.com/games/
go get the nexus mod manager from them too.
its invaluable. 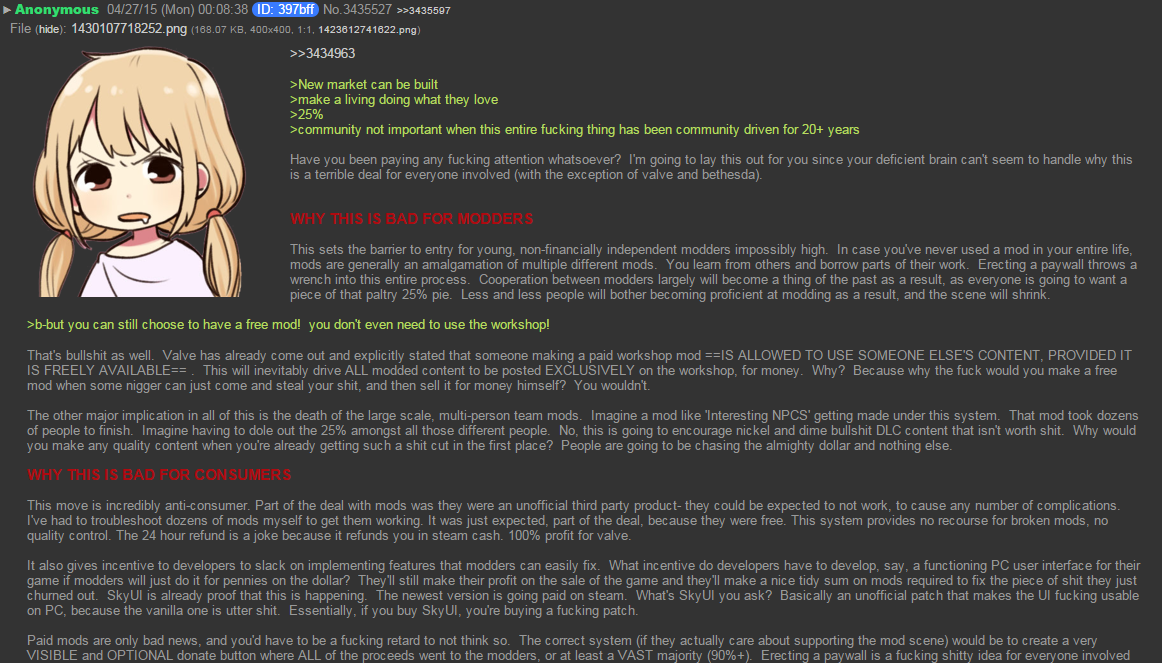 I am so old school? I will never pay for mods. Modding is (at least to me) a labor of love and the building of skills. Capitalism will destroy modding. Or at best? Turn it into google play store, with nothing being really special.

The moders will not release current updates to mods in nexus now, because they cannot make money off it.

Yeah I think its bs. I wrote this.

Steam is now taking a 75% cut of profits from game modifications being sold on its store! Not cool Valve.
(Depending on your IQ you can jump straight to the video, read my Rant 30 or both )
Mods have always been free and should mostly* stay that way because they do not go through the same testing as a commercial product, they attract amateurs** and conflicting mods can break whatever game they borrow from in the first place. Worse than that, it takes a culture of giving and pushes it down the same abominable path the Free to Play and Downloadable Content (DLC) business models have gone. None of these models are inherently bad***, but neither was communism. Turning mods into a business, especially with a 75% cut to the distributors, is going mutate the beauty of unconstrained creativity such as Garry's Mod into a bloated mess $2.99 Candy textured horse scrotum!
I can go on. Right now the value chain goes modder -> one of many free outlets -> consumer. Now Steam is monetising the middle link; using its ubiquity/monopoly to make itself the only real option for a modder looking to get paid and encourages a gamer to pay for the mods on top of all the other gaming expenses.
Current counter-movements to whatever greedy anti-consumer business move is being dreamt up are a Godsend. However, they sometimes one-sided complaints that offer no solution. I'll try not to do that. The other side of the argument that you need to be wary of is being an "entitled consumer". Are we entitled to free mods? No. Should we accept and appreciate free mods, giving constructive feedback and support so that the amateur modder so that they can have a polished portfolio of mods that may help them get hired? Absolutely. A solution I like is to make mods charityware, meaning you are encouraged to pay a price you set but have the option to opt-out and get it for free. In any case, don't stand for the 75% cut to the distributors, here's a petition, who knows? It might do something! (https://www.change.org/p/valve-remove-the-paid-content-of-t…).
* total conversion mods are practically new games. I don't want to live in a world where people pay $1 for 4K horse genitals.
** using the medium to learn skills that may later get them hired
*** Unreal Tournament 4 is doing something similar yet I believe it to be ethical because the cut is more like 10%, UT4 will be free to everyone with no other catches, nothing can give a competitive advantage, Unreal have supported modding since the 90's (run modding competitions with large cash prize pools. Facilitated many games like Killing Floor) and what i've experience from the community is truly a symbiosis.

That video made me lol almost as hard as the GTX 970 version.