So, I was getting a pretty solid 60+FPS With a few mods in GTA before the new DLC update,

After the update I'm getting around 50FPS but with fast driving and explosions it get's much lower. The V-ram usage has gone through the roof, GTA reports is is using around 2.2GB of V-ram but MSI afterburner says its using over 3.5GB which is the Cap for my GTX 970. The GPU usage is bouncing between 50-80% load.

I'm going to try a reinstall of the Update with an old back up of the game and see if that makes a difference...

Is anyone else getting problems or performance issues?, Has Rockstar F***ed it up?

EDIT & UPDATE:
The issue's some what seems to be fixed, in the new update, (Version 335.1 I think) while my V-ram usage is still high it doesn't seem to be causing any problems, I'm getting my usal 60+ FPS with a few small drops here and there with mods installed.
Moral of the story, keep those backups handy and you can always play offline for a few days while things get fixed.

So after reinstalling the Patch things don't seem to be all that different, I still have low FPS and V-ram is at 3.5gb 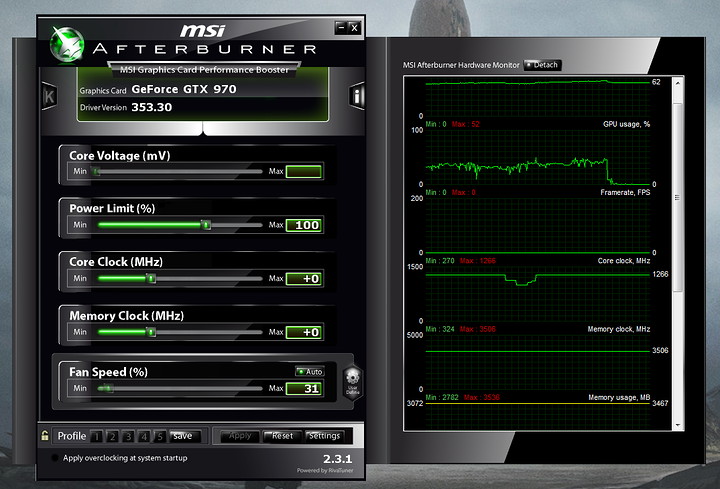 Try moving the game over to the SSD. It's actually really easy to re-launch the game from the SSD instead. It just re-discovers the files just like when using a steam version of the game. I think GTA eats more VRAM than is reported.

What is the full P/N on your HDD? I'm thinking HDDs might just not be optimized for larger open world titles IE streaming speeds. Maybe looking into a 8GB upgrade too to 16 for RAM instead. More RAM will have a benifit to this game. Instead say 4-8GB always in memory 12-16 may be more beneficial.

Are you running on Windows 10 by chance and have the latest Nvidia drivers?

The SSD idea is not a bad one at all, I might try that
I don't know what the P/N of the HDD is,
I'm currently on Windows 7 with the latest nvidia drivers (353.30 I think)

According to reddit lots of people are having this problem. Supposedly its because they put an anti cheat thing in that crushes performance for everyone

I just went back to a previous version before the update and I'm not having any problems, I can't really see the need to update because I don't play online.

You can find the P/N by browsing to Storage Devices and checking there.

Yeah its not just you this is something that happened to alot of people since the last update.

I cant even install the game after amd updates

AMD updates? Did you fully remove the AMD folders, the driver, and previous ghost drivers?

nope? cant be bothered atm, if i cant play i cant play. plenty of other games

Not updating your drivers properly will lead to problems in the future. It is about 20-30 minutes of your time. If you do not wish to then fine.

thanks for the tip obiwan.

edit: lol why was this flagged?

No need to be sarcastic. It is in your best interest to keep up to date. Unless of course those drivers lead to more issues! I have tested GTA 5 installed to an SSD running the R9 290 Tri-X and haven't run into any issues. Save for the shitty netcode built into the multi-player and how the fire wall works with the UPnP port

lol I wasnt being sarcastic. isnt obiwan revered as a wise sage? jesus taking butthurt to a whole new level I see,

"Thanks for the tip Obiwan" is a passive aggressive statement. I said something that was along the lines of captain obvious and you responded in a negative fashion. I am simply trying to be informative, but if you want to be a dick about it whatever.

its your choice to interpret it how you will

Hmm, well I still haven't updated at all, maybe it time to give it another shot. I can always jest copy the game files from my backup if it's no good. Thanks for the info @shivaanrajeshsingh

I cant play at all since the update, freezes at the loading screen, but I think it might be due to my cards dying :(