GPU Update for a HTPC

First off; upgrading the Motherboard/CPU, RAM and or PSU is not possbile due to them beeing proprietary.

I am currently debating on buying the single slot variant of the Inno3D 1050Ti.

I have a HTPC setup that is running the following hardware at the moment.

Now, the situation is as follows:
The PSU does not supply any 6 or 8-Pin power for PCIe devices. Also the PC has a tiny case that leaves room for only a real single slot GPU. So in 2016 I was offered that system for basically free and it is running exceptionally well. Eventhough the R7 250 manages to get Dark Souls II SOTFS running at 55-60 FPS, it is struggeling with current games. A couple days ago I found out that Inno3D has a single slot variant of the GTX 1050Ti and I am debating on buying it.

If you got any thoughts or ideas or maybe even better alternatives be welcome to share them!

Do it… you’ll certainly notice the limits of your CPU and ram capacity more with a better GPU, but the gtx1050ti is a beast little card, seriously capable of in the >40fps 1080p average ultra settings in most modern games, so 60fps with some sensible settings tweaks… although again not sure if the 4gb of ram and core2quad are.

The 75w draw won’t worry your PSU either, and it doesn’t need an additional power connector. However no idea how hot or loud the single slot version is, as basically every other compact version on the market is short but still at least slot and a half thick. And watch the length vs other compact gtx1050ti, its 211mm long (so 41mm longer than a mITX board) so your case needs to fit that. Likewise its a fully recirculating card, not one that forces air out the back, so your case airflow needs to handle that (although the xfx270 cor eor ghost was the same). Still the GPU is powerful enough, 4gb Vram with modern memory compression is solid for 1080p even into the future, and its display connectors should be fine (Dual Link DVI-D, HDMI 2.0b, DisplayPort 1.4), so assuming the acoustics turn out to be good enough for your needs it’ll be amazing for an HTPC.

For others finding this thread I’ve linked the card in question below:
http://inno3d.com/products_detail.php?refid=297

Thank you for your input! I already check all of the things you have mentioned. Airflow is optimal as the sidepanel has a filtered cutout where the GPU sits. The only reason I am still debating on getting it is pricing here in Europe, 160+€ is quite some money for an entry level card! If I am spending the money I have to get some return on investment and I am still not 100% set on whether the other components (mainly CPU) will be able to keep up!

Weren’t some of the old pre-built computers’ motherboards unable to post with modern GPUs? You should definitely have a look around and see if others have experience with the motherboard in question before spending money on new hardware.

Good point! I’ll see if I can find anything about compatibility. Thanks

I dont see the need for a 1050 ti unless you plan on playing some more recent titles and arent going to do in home streaming. The 1030 will do 4k @ 60fps with hardware HEVC decoding. Games wont be great on it but should still be better than the R7 250. Just my opinion really. When I game on my HTPC its almost exclusively via in home streaming.

I’m not hip with team reds offering but that sounds about right to me.

Gaming would seem to be the case:

Eventhough the R7 250 manages to get Dark Souls II SOTFS running at 55-60 FPS, it is struggeling with current games

If your wanting to play modern games, the gtx1030 isn’t really much chop. If not, the r7 250 would be fine, so while if I was recommending a new card for the HTPC because the last one died ect the gtx1030 would be ideal, for “current games” I’d certainly be looking at bigger cards.

Where the 1030 shines is at 720p, with low to medium settings it can offer 40-60fps in most titles for a smooth enjoyable experience, however show it a almost any fairly new game at 1080p and its basically dead in the water.

For reference the 1030 gets only ~12 fps in Ashes of singularity’s normal (the lowest of the 3) benchmark at 1080p (as a game its known to be hard to run, but thats struggle to play levels), and overall the modern integrated 630 graphics perform 59.6% as well, and can be found in a kaby lake Pentium worth less than a standalone NVIDIA card that’d crush the core2quad by almost double in CPU performance and give modern extensions and features like native 4k decoding.

Which is why I mentioned in home streaming. You seemed to have missed my point.

Not really, if you want to simply decode steam in-home game stream you can do that with the existing card or with a steam-link box that costs less than the 1030. Hence upgrading the graphics is only really sensible if playing games on the device, not just streaming through it.

But he would still be without hardware decoding for HEVC.

Steam in-home streaming is fine using H264, H265 looks better for a given bit-rate, but bitrate is normally non-binding on a local network (especially wired network) connection, for a example as even something like HDR 4k Netflix only recommends a 25Mbps connection (and typically uses averaging in the order of 19Mbps), and increasing frame rate has very good positive scaling (ie twice the fps is way less than twice the size) so even on only a 100Mbps wired network you can push good visual quality with H264 without issues, and gigabit can be excellent. H265 on the other hand allows better visuals over slower networks (like older wireless) but is MUCH harder to encode, and slightly harder to decode, and so its been slow to see hardware solutions (as they take up more valuable die space than h264 did, hence only appears on radeon fury or rx300 or Nvidia 950, 960 and 10xx series), and software decoding adds considerable latency to the extent of binding frame rates, unlike with h264 where any reasonable CPU fill most users needs.

BTW this is the H265 decode benchmark results for a Core2Quad Q8300, which is VERY similar in design and performance to the Q8200 owned by OP (the q8200 being the equivalent from one year prior, and ~94% the raw performance). 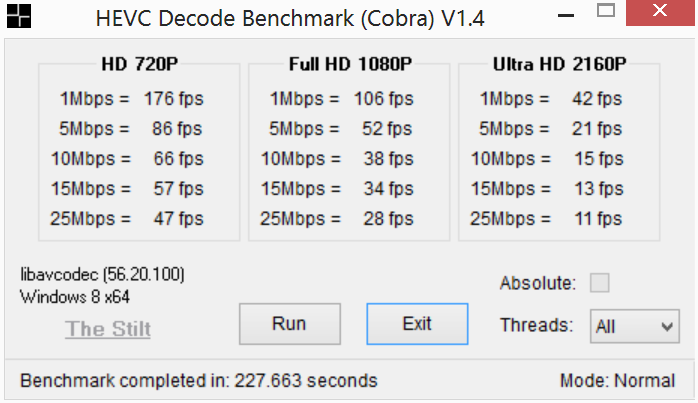 For reference twitch (which is still h264, so less quality for a given bit-rate) recommends (and will downscale too when not set to source) only [email protected] (so a similar quality h265 would decode on OP’s Q8200 at 60fps), [email protected] (easily >60fps, probably over 100). Netflix supports both H264 and H265, but unless your on the very top quality option for H265 the advantage is only that using the H265 is it’s going to consume less bandwidth (averages like in the ballpark of 50% at 720p or 1080p), so if your internet bandwidth is a constraint and you watch lots of Netflix the 1030 is a solid upgrade over the r7 250, through if your also gaming locally the gtx1050ti still offers the same features. Sadly there is not a heap of other h265 content to consume right now, so unless you have something in mind that needs it, I’d personalty wait, it could be easily be another GPU generation before h265 becomes common in mainstream content. Although even if a big provider like YouTube did switch tomorrow, you could still run its current content playback bit-rates through h265 on the Q8200 via software decoding (and they will likely lower bitrates used anyway), so unless you have a higher resolution (1440p or 4k) TV the current setup going to be fine for most content.

I personally have plenty of h265 content on my NAS. But hey to each their own. Op hasn’t replied with wether he’s even interested in steam in home streaming or not and the whole post I made was my opinion of best way to go.

However, I think you might want to get 8GB of DDR2 to pair up with it. Last year I upgraded my GF’s Lenovo SFF HTPC that had similar specs. The 8GB DDR2 RAM cost more than the GT730 graphics card! She only has a 250W PSU and the GPU had to be half height single slot. The 730 was the best card that would fit. It was hard to find compatible RAM and eventually I had to get it from Lenovo.

That depends on a few factors really. You have to account for the load total of the components. Figure 80w for the CPU plus whatever the ram is using. Call it 100w even to be conservative though its probably not quite that high. another 8-10w for a 3.5" mechanical drive, and assume about the same for an optical drive. Were at about 120w, plus whatever the card might draw. Say a max of 75w there, were only still looking at 195w. sprinkle in some fans and a few peripherals and you might be closer to 250. Its not operating inside of its peak efficiency curve but it should do fine.

The R7 250 thats in it currently only uses about 10w less if you go by TDP. If you started throwing more at it you could be asking for failure. A 400w PSU would definitely help with power efficiency though.

Just chipping in my $0.02 and say that if you are planning on playing games on this, a 1050Ti will be just the ticket. I put this in my Steam in home streaming rig and am very happy with its performance and power consumption is very low which is good for my headless HTPC server that I leave running 24/7.

It will play many slightly older games at 60FPS at 1080p, all settings maxed out easily and most new titles at around 45FPS maxed out. Very playable and not bad for a little card that generates little heat and requires little power.

If you want to go stupid you could technically get away with using the Galax GeForce GTX 1070 Katana 8GB and an adapter to get the 6 pin power… it’d probably stay under the 400w total system, but probably pushing your luck and not great for the budget =P