I will like to upgrade my PC GPU. Currently, I have 2 GTX 1080 in SLI with a 3 x 1080p monitor setup for flying games. Performance so far has been good, but I will like to move to a single GPU configuration.

My reasons for moving to a single GPU are cost reduction for my power bill and get a little better performance. Last, I will like to be adventurous and ditch Microsoft for good this time for gaming (hope don’t regret it). I heard SLI does not play well with Tux.

So reviewing my country amazon store, I found that Vega VII is a little bit cheaper than RTX2080. I have seen reviews that do not recommend Vega VII in the aspect of price vs performance.

If I change my current setup, will I get a better performance with these new cards? If so, which would you recommend?

Neither of those two can compare against 2x GTX 1080 if the game have good support for multi gpu.

I would personally take the Radeon VII for linux use. If you decide to go with it remember that drivers for it are in the kernel which means newer kernel = newer drivers.

The RTX 2080 is still a really good card but it won’t fit my use of Linux.

Before you buy anything have you tried the support for your flying games on linux ?

For Linux I would favor the Radeon as well, just for the drivers. The performance seems to be better then the 2080 on Linux too. But as previously suggested, test your games first before you commit. There’s no guarantee they will even run in the first place, and performance is a whole other thing as well, especially if you need to use WINE.

im getting ready to test jumping to linux as well, and all external research, and some of my own history has shown that AMD gpus have played nicer with linux. im getting a radeon 7 tomorrow, least according to fedex, so ill be able to get first had data soon.

Neither of those two can compare against 2x GTX 1080 if the game have good support for multi gpu.

Neither of them will compare to Crossfire Vega 64 IF the game has good enough support for multi GPU.

Now, back to reality, instead of nerd fantasy land…

Having a pair a Vega 64s and having run them in crossfire, i ended up putting one back in my old PC and having a second gaming PC. I have no doubt that in Nvidia land, SLI is the same.

The support for multi-GPU is trash, and you’ll spend more time fucking around with in game settings (in each game, different shit to tweak in each game) to disable some specific unknown game feature that doesn’t work properly with multi-GPU than actually playing the game.

The games multi-GPU works WELL on are generally old enough that they run just fine on a single potato these days anyway. Crossfire/SLI is fine for e-peen benchmarks. Little else. Some games even run SLOWER. Looking at you - Ghost Recon Wildlands. Which lists crossfire as a feature.

But for the most part it’s a wash.

Before selling off your current GTX 1080s or removing them from your build, try running Linux with a single GTX 1080 to see how well it will perform in WINE to see if it’s worth the switch.

If you believe that it’s worth the switch, I would get the Radeon 7 over the RTX 2080 for a Linux GPU.

I was deciding between these two cards as well. Having only 8Gb of vram on the 2080 makes this a bad choice for longevity, especially for 4k which i use. Linux support is another thing and so is fuck nvidia.

I went with Amd but there are some considerations.

For the RVII the noise is a concern and it needs quite a bit of airflow, undervolting is practically mandatory, luckily this is easy under windows and Linux. Mine does 960mv at stock which is great but no guarantee.

As for noise i plan to install a Raijintek Morpheus Vega edition after i let the card run for a while to make sure it’s ok. Maybe an aio but i despise pump noise.

Running Arch it’s rock solid so far, great card overall and fun to tweak around with.

Any news on Radeon Chill support for Linux? It works really well on Windows, but i haven’t seen any mention of it being supported for Linux yet (currently running Vega 64 in Linux, but yeah…).

If I was a gamer I would wait for the top of the line Navi from AMD to show up in May or June. It’ll be cheaper and better than the 2080Ti . In fact I’ll probably get a second GPU top NAVI before Christmas just because. 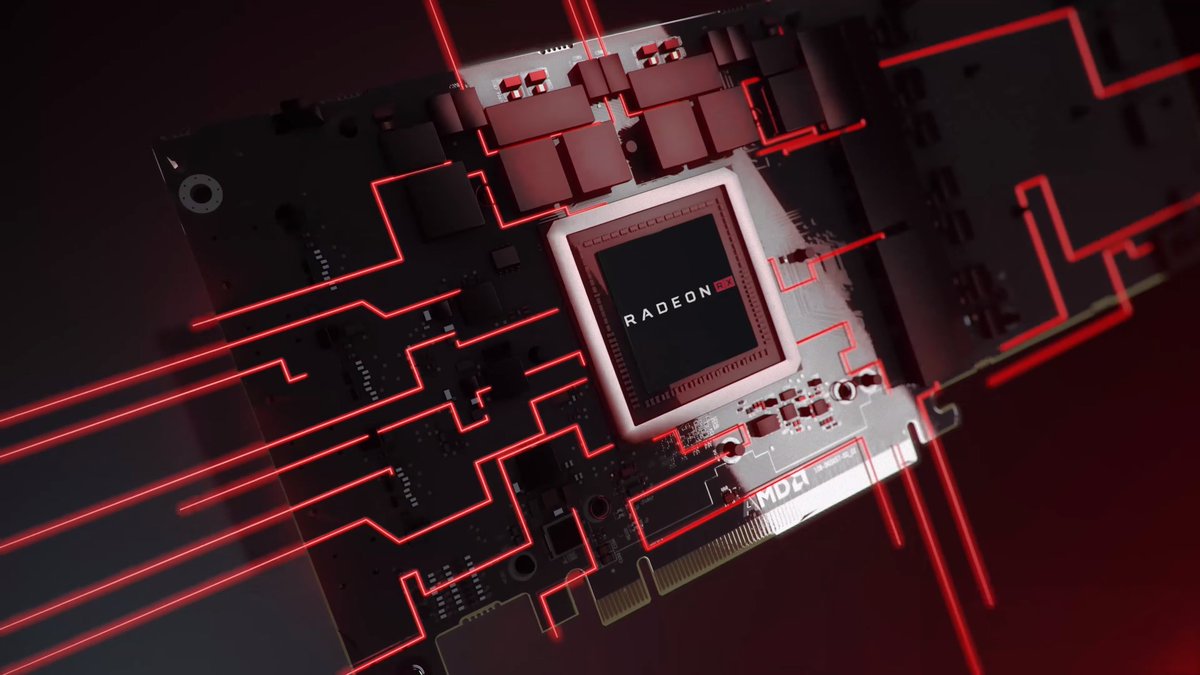 AMD's Navi 20 GPU would be the high-end successor to the Vega GPU and is allegedely said to support DXR Ray Tracing.

I bought the Radeon 7 because I’m an artist and its the best deal out there. Can’t wait for its pro drivers to come out. Don’t let anyone tell you it’s noisy. I just installed Windows 10 Pro and Houdini 17.5 on it and it’s running Houdini quiet as a whisper. 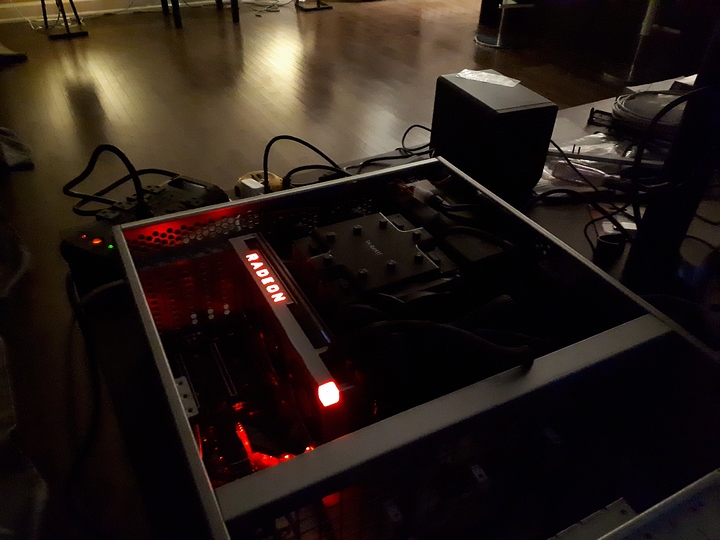 Kinda depends really.
Linux is not really the greatest platform for gaming to begin with.
It seems that AMD cards kinda work better on linux.
So in that regard the Vega 7 card might be the better choice.
But still don´t really expect miracles wenn it comes to gaming on linux.
Unless the games you play have a native linux port.
But if not, then don´t expect an headache free adoption to begin with.

As far as gaming on windows is concerned.
For games that support sli well, there isnt really that much,
on the market right now that would be a significant upgrade over 2x GTX1080´s in sli.
A single RTX2080 would be a nice single card replacement for it.
But of course there also is a 2080ti.

When I was doing my research I was surprised to find that two GTR 2070’s performed better than a single 2080Ti for a substantially lower price. Puget Computers did the testing. In fact the 2070 performed as well or even better than the 2080 in many apps.

V-Ray is a hybrid rendering engine that can run on both CPUs and GPUs, depending on the version that is used. The current benchmark only measures CPU and GPU performance separately, though, and while that is not ideal or a perfect match for how the... 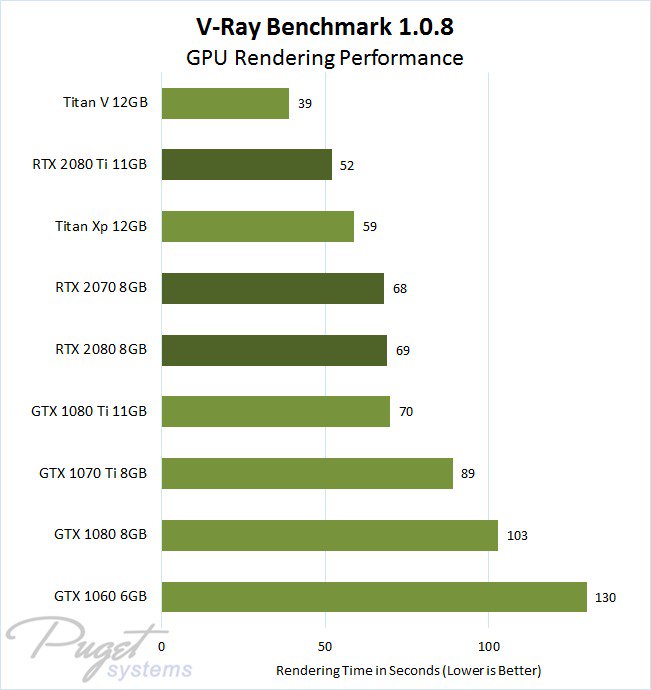 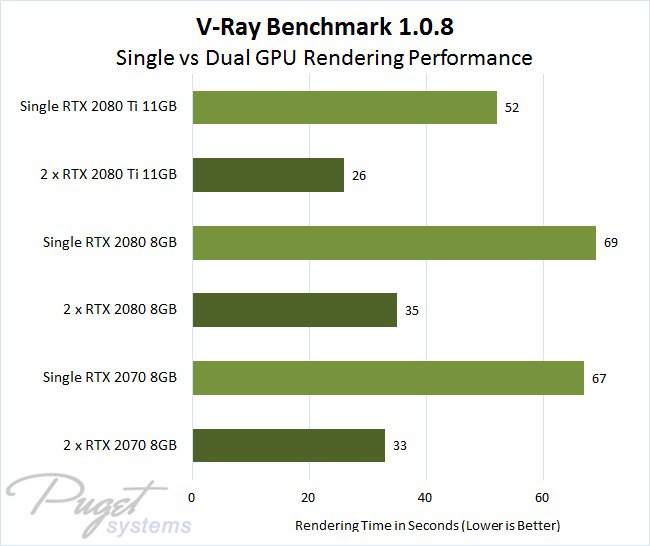 Yeah but only in games that work well with sli.
Not every game works well with multiple gpu setups.
And of course a potential cpu bottleneck is also a thing to concider,
wenn gaming on lower res like 1080p.

Yup RTX2070 and below cannot do sli anymore indeed.

Hello team, thanks for all your support. In the end, I bought the Radeon VII card. In my country it was cheaper than the RTX2080.

My setup is not that great but it is working with the games I play (Factorio, Doom, Borderlands,etc) on Linux/GNU. Although as @MisteryAngel said, perhaps the greatest performance is not there on Linux/GNU but the overall experience is great.

Of course the version I am running now is the Ubuntu 19.04 Beta because I was unable to run it on the 18.04 LTS and Fedora 30 (beta) releases. But although is Ubuntu, I found it really stable and easy to use (In comparison to windows).

I believe I will continue using Linux/GNU, hopefully I will add to the overall population of Linux/GNU users for developer to start taking more interest in developing on this platform.

I believe I will continue using Linux/GNU, hopefully I will add to the overall population of Linux/GNU users for developer to start taking more interest in developing on this platform.

Vulkan kinda would be a very important factor.
Unfortunately it’s still kinda silent around it.
A very few games have adopted it like Doom.
And the performance we have seen on windows was magnificent.
We can only hope that Vulkan is getting more support and development for linux aswell.