Got some new hardwares

So I was out, and decided I wanted to rid of my shitty old HDD and get some SSD's and run 'em in RAID-0. So I drove over to Microcenter (center of the universe) and got two of these bad boys. 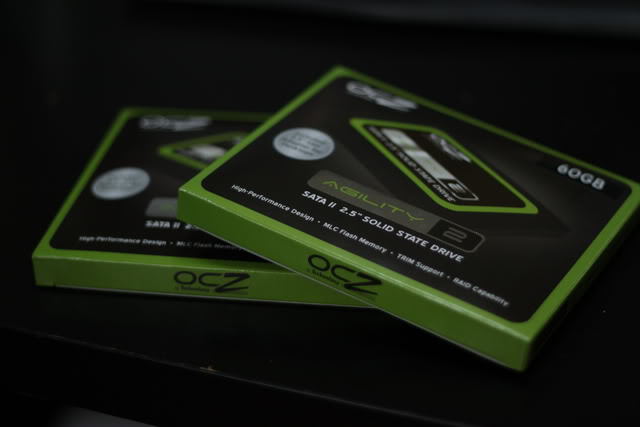 Was a little different setting up raid on a P55 than it is on other boards.. I guess I just haven' kept up with (BIOS) times. Â Anywho, after POST, my windows boots to desktop in 14 seconds. Shuts down in 6, and is just retarded fast.

I would recommend getting these to anyone. Got em for only $150 each (no rebate bullshit).Heres a link:

Yeah that means no raid but who cares it's fast and theres more room to install things you don't have time for but just want.

Well i was looking at that, but I wanted RAID. Main reason.

What's the advantage of RAIDing an SSD? They're already overly fast, lol.

Is it true, that SSDs... uses less power than regular HDD? Runs cooler than HDD? Can run on SATA150 even though the SSD is SATA300?

Want one of 'em in my notebook when 512GB get's cheap mainstream :3

I guess some people just dont appreciate overkill like I do.

Oooooouuu sweet :D
What raid did you put them in?

I'm waiting for SSD prices to come down to near conventional Harddrive prices.

WOnt happen in a while :]

Trust me, it's worth the money

WOnt happen in a while :]

Trust me, it's worth the money

You wont get trim if you go with raid as well unless thats changed?