Got my old hardware back

All I need is a harddrive to have a functional average pc. But I don't need a second pc.. So I am posting this because I want some input on what I can do with this hardware in a nice setup.

Or should I just buy some accessories to "pimp" it up and make it look really nice?

Pic from when I used some of this hardware last time: 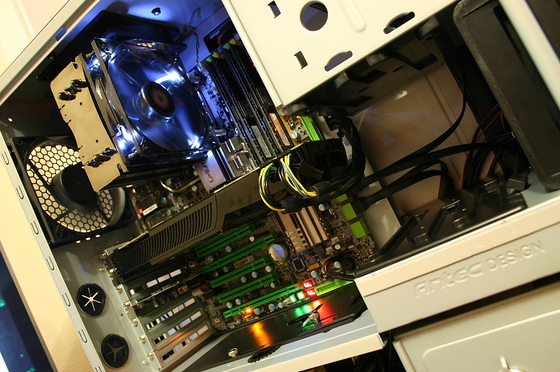 i would turn it into a home network pc

You've really gotta miss the old color schemes from the high end motherboards back then. Not really sure what you would do with the old build though. It looks sexy, but the parts are kind of outdated by now. I'm sure you could still play most games on it though.

turn that thing into a Folding at home spaceheater, I know its like winter 11 months of the year over there

for optimal heat disapation turn the case vertically upside down, this puts more pressure on the chip from the heatsink, also the heat pipes will work better in that orientation

I'm currently looking for the almost exact specs so I could build a test PC. Just get 2nd hand parts and build em.

I do have one test PC, but it's very outdated. Trying to sell it.

Yea, that would be a good idea.. Pimp it up for the amusement, and then sell it off... Hmmm I'll think I'll go with that. Could be fun : )

Daaamn, I just remembered I also have a EVGA x58 SLI M-ATX card lying around aswell.. Could migrate my current 1366 system into it.. and upgrade my main pc :D:D:D...

Getting this in today. Making it a badass server running legit Windows server 2012