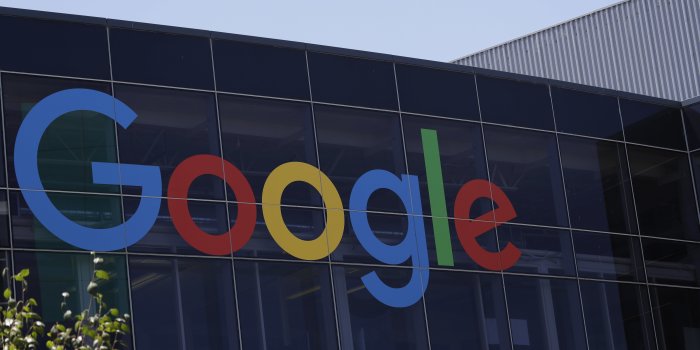 Google is issuing refunds to advertisers for ads bought through its platform that ran on sites with fraudulent traffic, people familiar with the situation say, as the company develops a tool to give buyers more transparency about their purchases.

So, it appears that AdNauseam is causing a bit of a headache for Google.

Since lots of people are starting to use AdNauseam, it seems that advertisers are losing trust in the Googs. 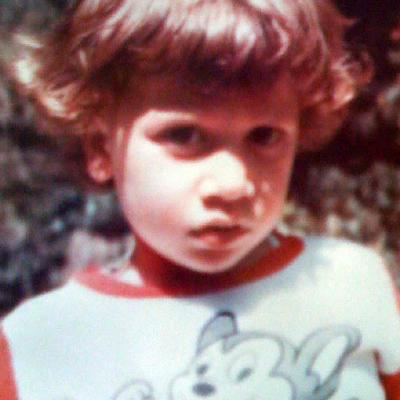 AdNauseam: Fight back against advertising surveillance

What are your thoughts on the whole ethical side of AdNauseam? I’m struggling with this one because on one side a way of fighting against ad surveillance but on the other side it appears to be getting awfully close to Click Fraud.

I just added it to try out. There is an option to turn off Ad Clicking. 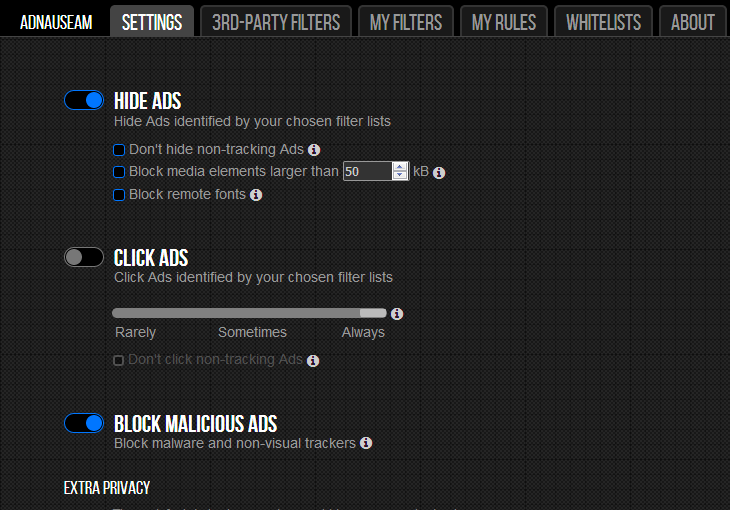 Yeah, the main point of this one, from what I can tell, is that feature.

AdNauseam is a lightweight browser extension that blends software tool and artware intervention to fight back against tracking by advertising networks. AdNauseam works like an ad-blocker (it is built atop uBlock-Origin) to silently simulate clicks on each blocked ad, confusing trackers as to one’s real interests. At the same time, AdNauseam serves as a means of amplifying users’ discontent with advertising networks that disregard privacy and facilitate bulk surveillance agendas.

We conceptualize AdNauseam within a broader class of software systems that serve ethical, political, and expressive ends. In light of the industry’s failure on a Do Not Track standard, or to otherwise address the excesses of network tracking, AdNauseam allows individual users to take matters into their own hands, offering cover against certain forms of surveillance, profiling, and practices of discrimination. Taken in this light, the software represents a similar approach to that of TrackMeNot, which attempts to relocate power in the hands of individual users, rather than vast commercial entities. For further information on this approach, please see this paper.

That (the bolded) would sound appealing to many.

So, it appears that AdNauseam is causing a bit of a headache for Google.

That is why I love it.

What are your thoughts on the whole ethical side of AdNauseam?

It is very simple: Tone it down or get AdNausemed to death.

didnt know there was a prebuilt solution for this. might have to check it out

It has a neat little interface for dealing with any blocked ads. I am sure other adblockers have the capability to sift through the work they do, but this one has a pleasant GUI. 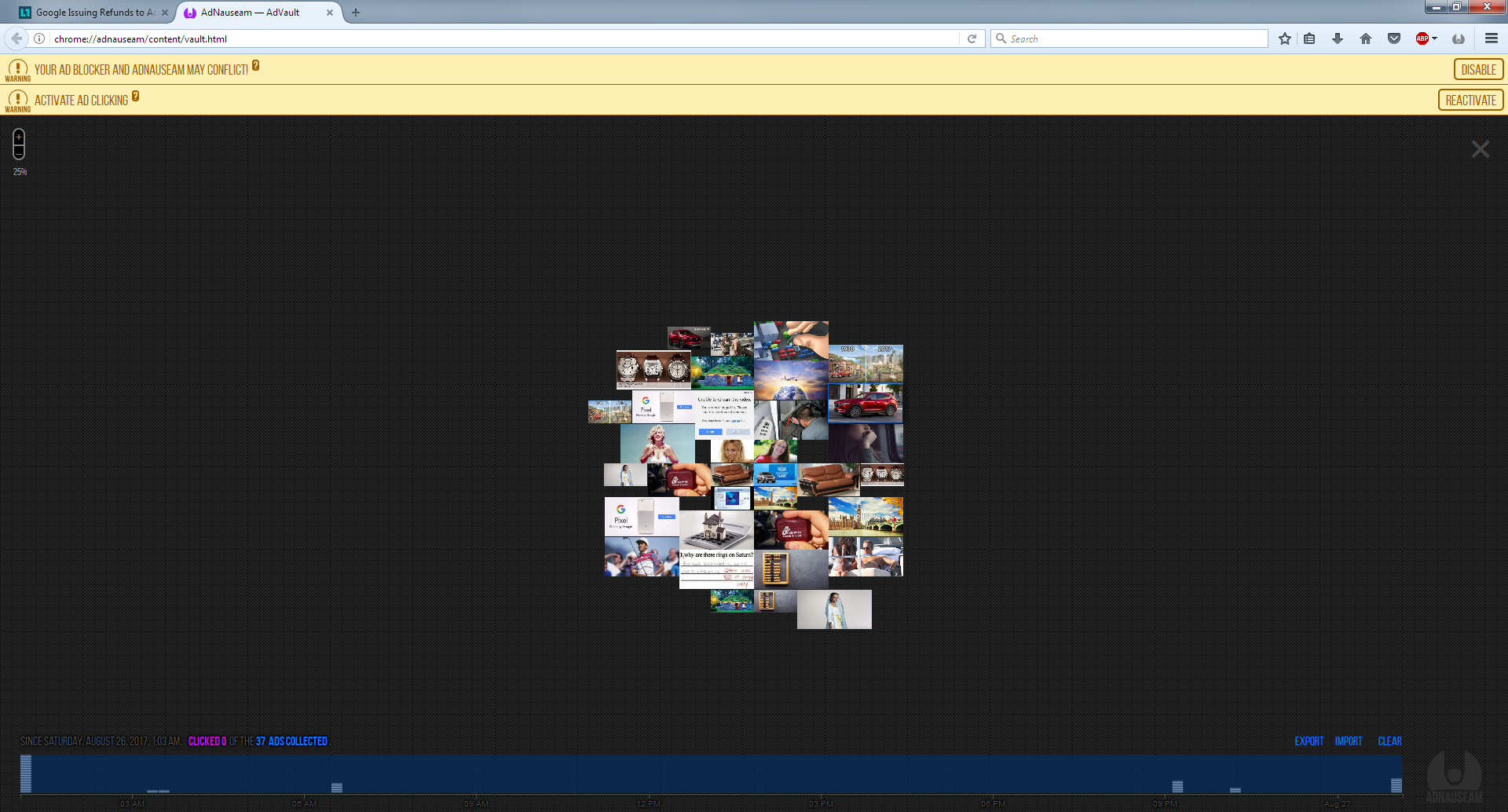 lol they’re going to go out of business because they have no PR. Fuckin idiots. 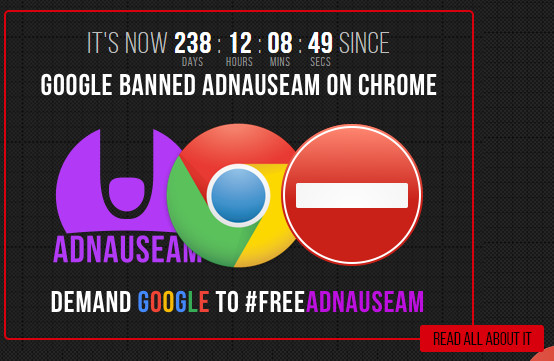 Welp, there is your problem.

I don’t support tracking or unsolicited data collection, that said I don’t support the idea that just because we CAN hide ads we should either. Ads in basic form a perfectly good way to fund a low cost per use platform, and without them a great many of the things we use today just couldn’t work. They allow users to have a “free” and a “paid” version of many web services, and even local software, and given their categories of content, locations and limits are set by the website that uses them, web admins can avoid causing any disruption to their sites actual functionality.

As such I DO NOT support hiding ads, even when it doesn’t deprive the content creators of income, or is done done in a way that advertisers are not being frauded, its still simply stealing content because you can. You don’t create a better web blocking ads, you create a better web tolerating them, and reporting any that are offensive or doing something they shouldn’t. But go totally nuts on avoiding tracking… thats fair enough.

Why would you think there’s a connection between click fraud and this extension?

I’d question if there’s enough people running it for it to be a problem.

I’m not sure why you’d want software to click on ads in the first place unless you actively click on ads (because its not going to stop tracking otherwise), but if your also hiding then, it would seem what you’re actually doing is participating in a malicious attack on some ad networks and an attack against the websites you visit as they will be negatively impacted as well.

It is very simple: Tone it down or get AdNausemed to death.

Words to live by.

I’d question if there’s enough people running it for it to be a problem.

Well, the article seems to indicate that there is at least a large amount of non-legit clicks that seems to be lowering advertisers trust in google.

As far as the click fraud goes, I think it’s related because of the second sentence in the wiki article I linked in OP:

Fraud occurs when a person, automated script or computer program imitates a legitimate user of a web browser, clicking on such an ad without having actual interest in the target of the ad’s link.

I would argue that this has a feature where an automated script or computer program imitates a legitimate user, clicking on an ad without having interest in the target.

That said, it’s hard to say exactly how much impact this is having.

Yes, but that’s its own industry. this plugin isn’t really part of that. People deliberately run click fraud in an attempt to generate money.

So click fraud is only a factor if action is taken with the intent of making money?

I guess that makes sense.

Fraud is fraud, if the law is build the right way even unintentional fraud may still be regarded as such.

This plugin could probably be considered a tool to commit fraud if someone activated the auto ad click button on it. I’m only really suggesting though that the plugin isnt popular enough to overshadow the current click fraud.

Its also a dis-service to the sites your visiting, if it is significant enough, and is detected, those sites will lose money, and will lose reputation as they might be flagged as sites participating in click fraud.

The idea that it hides your tracks i would argue is false, meaning its only remaining purpose if to allow (knowingly or unknowingly) users to participate in click fraud.

nothing can hide your tracks but what it does is blur the lines of what you do want and what you dont want to make it harder to guess. I like that they have a “acceptable” ads policy which will allow ads that dont track you