Any comments would be appreciated ;)

This is where mine went, although it was a 4.6GHz stock chip and started needing voltage at 4.7GHz. 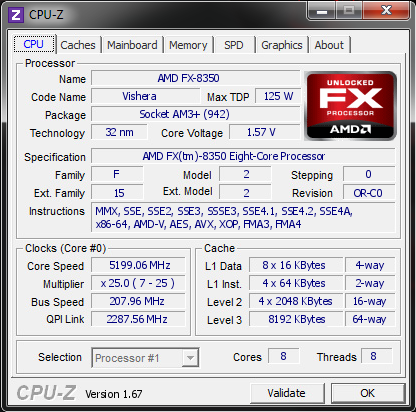 Was stable for around 16 months.

How stable is what you're measuring as 'stable' - does it pass hours and hours of benchmarks and stress tests?
Max core temp of 35c..... proof please. Without a sub-zero amient temperature there is no way in Westeros that a FX chip after stress tests/benchmarks can be that low.

Yeah, thermal sensors on some of the AM3+ boards are pretty borked. What are you cooling it with, @AzzaHD?

The cooler is the corsair H110I GT, here's some temps/ voltage proof (had to up the voltage to get 5Ghz) ;) 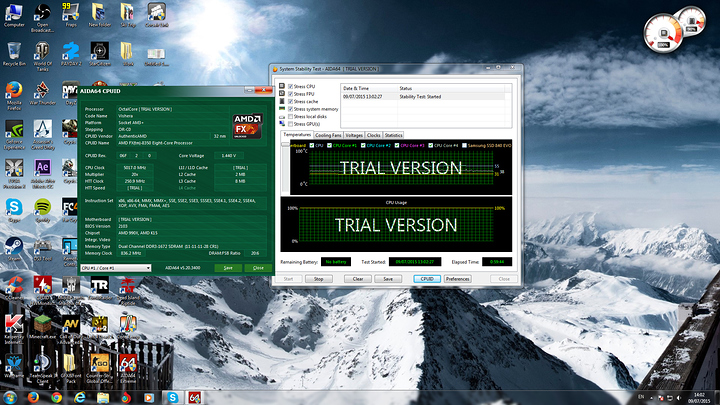 Aida is not stressing the cpu really try prime 95. :D

After 5.2 though I found that most 8350 chips regardless of their current input voltage really start to be greedy. As to get to 5.3 took 1.46v

no, prime fucks with the voltages. aida is fine

I know they are safe to quite a high voltage. What i mean by greedy in terms of their power consumption is the amount of power in to performance out just hits a very steep exponential curve.

any opinion on amd overdrivers built in stability test !

i wouldn't... aida is enough

4.7Ghz on stock voltage?
hmmz can you post a screen of that?
just currious which overclock method you used.

I don't have any screen shots of it at 4.7Ghz, as its at 5Ghz stable now. Although I overclocked by bumping up the bus frequency rather than the normal multiplier method due to it being better on the single cores.

ah okay northbridge overclocking.
i did that aswell, i got 4.8Ghz out of my FX8350.

Is there a difference between the classic multiplier and north bridge?