In these hallowed halls, the Master seems to be the go-to for a Ryzen 3000 high-end, Linux, and VFIO motherboard. There’s the perfect UEFI settings thread, but that’s OS-agnostic and IMHO should stay that way.
The Master runs Linux pretty well out of the box, but it isn’t perfect, and I thought, why not make a thread to iron out the kinks, share tweaks, and so on.

At the moment I’m all questions, but I could keep the first post current, and answer questions, if there’s interest.
[Until and unless otherwise noted, I’m on BIOS f5l, Mint 19.2 (= Ubuntu 18.04), with full HWE stack (currently 5.0-ish kernel) and ppa:graphics-drivers/ppa]

I got the same issue with the audio on kernel 5.3-rc3. It seems like the ESS DAC is not activated on the rear panel port.

I stumbled on the same issue with audio. There are apparently two workarounds:

I’m still hoping for a fix that avoids using those workarounds.

For Hardware monitoring did you try this https://github.com/xdarklight/hwmon-it87 ?

I am not using the same board, but above solved my sensor problems. Only thing left is label it to friendly names, Remove some sensor output . 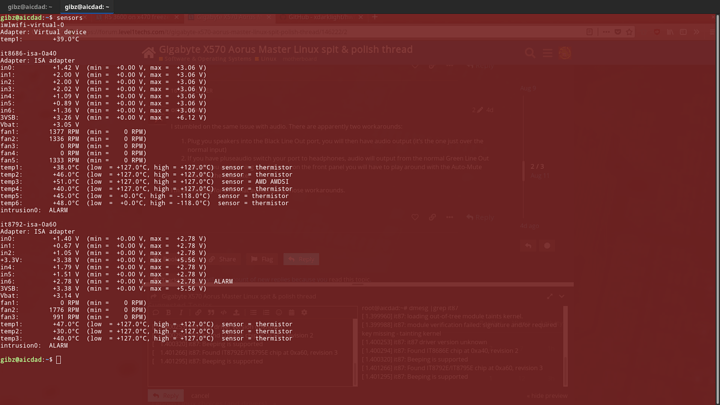 Don’t expect the module to be upstream. If this works install it as dkms module and set option on module to ignore conflict.

Same here, no speaker rear output when I removed headphones (connected to a front panel). I disabled the auto-mute with alsamixer, et voilà.

There was a Github issue on that specific chip, but of course the original source code was deleted and nobody is interested in adding to the driver, rather only maintaining read-only mirrors of the original:

I also have no output from the Realtek on my Aorus Master X570.

The audio is working properly after I followed this solution (OP posted his own solution). Super easy fix (patch).

I created a kernel-patch which completely fixes the line-out problems of the Gigabyte X570 Aorus Master by applying a workaround/quirk that repairs the DAC/mixer connection path. The patch is based on 5.6-rc2 and is proposed on LKML [see: https:// lkml .org/lkml/2020/2/23/22] in the hope that it will be included in Linux 5.6 (a little late for that) or 5.7. If you are on Linux 5.5 you can use the this [see: https:// pastebin .com/tbYXxAcy] patch.

Have a nice sunday,
Chris