Well, after a while on an owners thread on another tech forum I have come to the conclusion that I cannot recommend this board to anyone looking for a stable motherboard.

For a while now many of us who own this board, most of us running an AMD FX-83xx have been getting very bad voltage throttling when the CPU is at full load (Overclocked and at stock), originally this was thought to be because of the absolute garbage BIOS it has but one member disagreed and went on testing his own theory. After a little tinkering he discovered the root of the problem was either crappy VRMs or the crappy VRM heat sink that comes on the board. He ended up buying an aftermarket heat sink and mounting it on his board, that alone still didn't solve the problem but he then put a fan directly on top of it to cool it and the board was now stable. No voltage throttling when the CPU is at load.

A pic of his current set up.

After his discovery another member tried doing what he did with success. So we went and sent reports to Gigabytes tech support, here are some of replies we got. 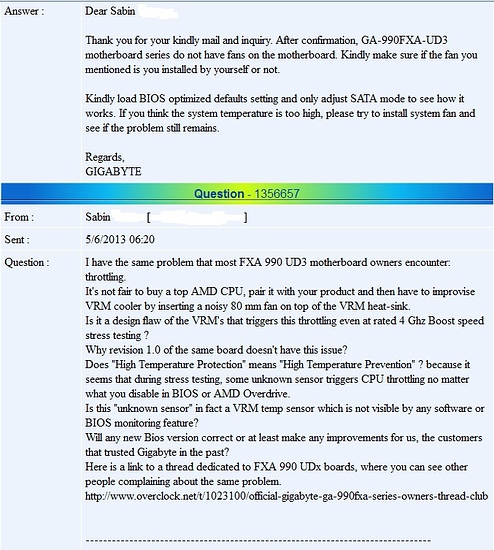 On top of the bad quality board the BIOS is just as bad, it's missing a lot of controls and most of the settings are done by offsets. This includes voltage which is just absolutely ridiculous.

In short the VRMs start to cause throttling when they get to a certain temp, problem is they get to that temp very very easy and require a fan to be placed on top of the heat sink just to acquire stability.

So if you were thinking of picking up this revision board (It's the most current so there is a great chance it's what most are selling) you may want to think twice and pick another board like many of us now wish we could. I personally will be saving up to buy a board from a different manufacture.

You are not the first peron in the world with this kind of problems with Gigabyte AM3+ boards, i reeded much more revieuws from people with the same kind of isseus, but wenn i post it on here,  some people here gonne get  crazy and freak out on me, thats why i dont post things about those boards anymore. gigabyte comes out with new bios versions over and over again, and still havent control the isssue

i  personaly recommend Asus Am3+ boards over Gigabyte boards, the reason for that is that some  GB boards have overheating problems, i reed much complaining about this with the  GA-970A-ud3 and the 990FXA-ud5 i read a lot of troubles with the bios.

So far UD5 owners have said the rev 1.1 board is the best. But that the rev 3.0 also has issues, overall I think I'm done with Gigabyte.

yeah maybe better to switch youre mobo with a Asus 990 FX sabbertooth R2.0.

Or the Asus M5A99FX pro R2.0 <-- this board has only 6+2 power phase, but still i heard very good oc capability´s on that power phase, asus has realy good quality vrm´s. Logan did an OC on it to  5 GHZ without any issues.

also as far as the numbers say on the box the Asrock 990FX extreme 9 12+2 power phase and goldplated solid capacitors should also be a very nice board with OC capability´s. But the best OC board would probably be the Asus Rog, but ofc its also the most expensive one..

Yeah I'm set on the top end ASUS board, time to start saving.

yeah next year i will replace my Asus M5A97 evo r2.0 6+2 power phase  to a  990FX board, i wait a year to see if there are comming more Gen 3 boards on the market. if not i would probably go with the Asus Sabbertooth or the Rog :)

This may not be the most popular comment to make, but in my opinion, the culprit is not Gigabyte alone. The problem imo is quite complex:

- Gigabyte has not provided heatsinks on the VRM MOS-FETs for the budget boards, but has incorporated a proprietary system of overheating protection, which is just the same thing other manufacturers do, however, the trigger temp on the Gigabyte boards is set quite a bit lower, so that the protection system actually works to prevent damage to the components. On an Asus board, the MOS-FET's will get just as hot, but Asus will not prevent them from reaching such high temperatures. Don't believe me? ... put your finger on the MOS-FETs of an Asus board with an FX-8350 and you'll know.

- It happens especially on systems that are not optimised to run FX-8350's, in that sense that if Windows is not updated to support the AMD core load distribution algoritms, the FX-8350 will run very hot and unnecessarily draw a lot of extra power. This is entirely a Microsoft fault, and although I don't believe in coincidence at all, I find it unfair of Microsoft that they do not push the updates or advertise them.

- I've not seen MOS-FET overheating at stock speeds. Most users should know better than to use budget boards to overclock such a mighty processor. However, this fact is not advertised sufficiently by AMD or motherboard manufacturers, which is also unfair. As I've mentioned before somewhere on the forum, the FX-8350 is a very expensive processor when overclocked to Intel CPU specs, because it draws a lot of power so you need a more expensive board, and it produces a lot of heat so you need an expensive aftermarket cooling solution. Of course AMD doesn't want to advertise this.

- The most available version of that board is the version 1.0, which is good, has a good BIOS, and is suitable for a non-overclocked FX-8350 or a moderatley overclocked FX-8320. The version 3.0 is not that available, it's just not that popular, because Gigabyte was forced to make some stupid BIOS choices because of Windows 8 compatibility, even though there was no problem to be solved except that Microsoft should issue the AMD patches spontaneously instead of helping break their customers' PC's and demanding stupid BIOS changes from manufacturers that exclude functionality for the sake of the Windows 8 monopoly.

Anyway, I've built several PC's with the 990FX UD5 board from Gigabyte, and even with extreme overclocks, that one has no problem at all, but then the heatsink assemblies for the VRM MOS-FETs on that board are quite hefty, and it has a more solid CPU power phase design. It also costs more.

I would still recommend the UD3 board for processors up to the FX6350, which is also 125W TDP, but it draws a lot less power than the FX-8350, and can be overclocked without problem on the UD3 board. The only thing I really don't like about Gigabyte is their attitude of "use Windows or die", they blindly implement every stupidity Microsoft tells them to implement, and they don't support more modern and serious operating systems at all. However, in terms of durability, they are the industry standard.

im hoping this is only for amd moba and not intel... D:

Saved by the bell... Thanks I had that board as part of my planned build and was about to buy it... I am forever in debt to you.

I wouldn't really call it a budget board it may not be the most expensive but it isn't the cheapest. I only got it because at the time it came bundled with the FX-8350, what's funny is it's only this revision that seems to have these problems. People with earlier revisions have told us they don't experience this problem.

It does indeed throttle at stock speeds when put at load sometimes, the board simply can't handle the CPU, why they don't warn people of that I don't know but I will not support that sort of crap. My CPU is water cooled and if it weren't for the crap BIOS I might have considered looking into water cooling the board as well.

In the end it may not be solely Gigabytes fault but they will take the blame if they had tested the board they would have seen these issues and they should have put a warning out suggesting not to pair an 8 core FX CPU with it.

I can't speak for their Intel boards but this particular board is for AMD. I'm sure Gigabyte has bad boards for Intel just like I'm sure every other manufacture probably does as well unfortunately everyone makes mistakes. The only thing I can suggest is to do research and if it's a new board wait for people to test it. Something I wish I had done back then, granted most of the reviews were positive, so I suggest you look at tech forums as if the owner is having a bad time with it you'll hear.

Don't give a hell about it. Try to explain it, if it didn't work. Why bother? The guy who has opened the thread will decide for himself who is right.

well looking like i'm going to have to invest in a new board before i upgrade to the saphire 7970 GHz ED :(

Sorry I couldn't warn you in time man. :(

No need to thank me, just trying to spread the word, we all are.

Its only AMD boards related, theire intel boards are fine.

And its not only a Rev 3.0 issue, also 1.0  issue as well. i mentioned this a few times before, on other topics, but some people  gotton spoiled on me.  and thinking im stupid, thats why i deleted those posts...There are also users wo have great experiance with those boards, but personaly as i said before prefer Asus  Am3+ boards over Gigabytes.

yes it is probably youre board would run fine on stock speeds, if i was you i would just run it on stock or do a little oc then safe some money i  replace the board in the future to a decent asus :) like the Asus Croshair Formula  or the Sabbertooth.

The OC feutures on those boards are great and very easy to use. and sollid especialy the Corshair Formula, they did the world record FX8350 OC to 7.2 GHZ or so on that board ☺

Im actually running at 4.6 right now. It only throttles at load so gaming ect doesn't cause it to throttle but if anything ever got near 100% on most cores it would start too. Yeah the Crosshair is what I'm aiming for.

did you try a prime test for a few hours on it?

the croshair is by the way a bit cheaper in Netherlands i saw its arround 212  euros, i dont know how its going in other country´s

would be nice if asus also release a croshair GEN 3 someday with pci-e 3.0