Getting the right wifi card for a GIGABYTE GA-Z77P-D3

Hi, I’ve got a massive PC which I basically inherited from a friend a few years ago when he was moving abroad. He had built it himself, and I guess at the time it was pretty much cutting edge. I don’t know how old it was when I got it, but I suppose that the name of the card will tell the experts. I’m not a gamer, a CGI technician or whatever else, so I assume that I can still get two or three years out of this thing. But the one thing that I really need to sort out is the wifi. My friend didn’t have a wifi card in it, as he had had it standing right next to the router.

I’ve bought two different wifi cards in the last three years, and both of them haven’t really worked out so well for me. I started with this external USB dongle-type one. I had a lot of trouble with it on Ubuntu, and constantly had to run a script that a guy on the Ubuntu Forum told me to use. More recently I’ve been using Windows on the PC (because I had trouble with an Ubuntu upgrade, and I’m going to sort that out soon). On Windows it’s very annoying, because it “forgets” the network every time I restart the PC (even after hibernating), and sometimes I just can’t reconnect without restarting once or twice. I can’t find any particular consistent context in which that happens, but that’s Windows for you, I guess.

That’s it for the first one, and then a few months ago I bought this internal card, because I was so fed up with what was going on with Windows.

And for this one… what can I say? I should probably have sent it straight back to Amazon, but I was too busy at the time, and a little bit stressed by the beginning of the lockdown (besides actually having caught the virus!), and in the end I just forgot. On Windows, the wifi driver never installed properly off the CD, and I couldn’t find anything online. I’m not sure how Linux deals with it, but I am in the process of testing out Linux distros off a USB, to decide which one I want to put on the PC, so maybe I can report back on that.

I can say that I tried Linux Mint last night, and there was very very little wifi speed (and it seemed to be from the dongle, because it went down to zero after I took it out). But I’ll maybe try again later today and see what happens. I guess the second one does say that it’s only for Windows (should have read more carefully when I bought it!!!)

So, in summary, can anyone tell me if there’s any point persevering with these, or is there a card out there which is a nailed on certainty to work on this motherboard more or less out of the box? I’ve never had good luck with buying wifi cards - quite a lot of money down the drain, unfortunately

Of course I realise that you normally just get what you pay for, but still don’t understand how it’s possible that they so often don’t work out.

Sorry, I’m very bad at keeping my forum posts short. Hopefully someone can help me out here anyway. Like many other people, I suppose, I really do need my wifi to be more reliable from now on with the shift to home working, so would very much appreciate help with this. Thanks in advance, of course!

Wifi can be a pain with Linux. Certain wifi chips (specifically Realtek) don’t have good/any drivers. Compound that with the possibility of random wifi adapter changing chips without changing model numbers, or atleast not updating their listing, and it can be a wild goose chase.

Not only that, but because many of the USB adapters have both wifi and onboard storage for the Windows drivers, you can have issues with usbmodeswitch. I have a couple adapters that worked, then didn’t work, then got fixed, and now don’t work with Ubuntu 20.04. I haven’t bothered to narrow down the precise version that last worked, but that’s life in Linux sometimes.

If you want the best possible support then it might be worth looking into an adapter to use a laptop wifi card from Intel or Atheros, as they usually have good Linux drivers. The adapters come with rp-sma connectors on the outside so you can move the antennae to a more optimal spot. Keeping extensions as short as possible while positioning them for good reception works really well.

USB also works but can have a few problems. USB 3.0 sockets create interference on the 2.4GHZ band. A short USB extension usually helps. If you do some research, you can sometimes find straightforward fixes for getting Realtek based dongles to work, but I have no clue what the state of affairs is with newer wifi stuff. I had been given this adapter: 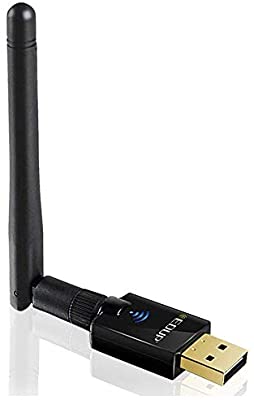 and it was hit or miss at first. Eventually someone released a DKMS driver which fixed all of the problems and I ended up buying a second one because of aforementioned older dongles not modeswitching in Ubuntu 20.04.

It’s a crap shoot. Figure out your bare minimum requirements, try to find a dongle or card that meets those requirements AND has working drivers (search this and find multiple sources of confirmation before spending) and with a little luck from the Linux gods you can have reliable wifi. Or you can get a drill and some ethernet cable.

Hey, yes, I was actually thinking yesterday that this might very well be the best solution for a bulky PC that you’re not going to move around. I bought one of those extenders a few weeks ago to cover the blind spots at my mum’s house, and am aware that they perform more than one function. In fact there is a LAN port on the TV that the PC is now connected to, so maybe I can get some use out of that as well (not sure though, as it’s not a super-smart TV).

I’ll still need to keep the adapters for the bluetooth, of course, but that seems to be a lot less problematic.

It’s all too much hassle, isn’t it? That’s why I think I’m going to go for the external solution suggested above. Thank God that this stuff is all just onboard with motherboards these days (I assume that that has cut out a lot of the trouble???)

This is how I connect my main PC (Linux only). Works really well once you set it up.

DONE. And it’s so easy. I’m a bit annoyed that I wasted money on that last wifi card. This repeater was half the price of that stupid card. Never mind, eh.