I’m looking for a USB headset for gaming on Linux. Obviously, I’d like it to work with Linux without a hassle. I’d like it to use it for music as well as games, and come with a decent, but not necessarily great mic. Am I asking for too much?

I guess I could use a standard analog headset, but my PC has a funky combo headphone jack, and I’m worried about compatibility. For instance, my bog standard Apple headset won’t work with it.

My friend, who I set up on linux, recently got this headset: http://a.co/hfnm7hs and I would say the mic quality is amazing. He is an absolute newbie to linux and he never asked me for help to get it working (other than asking how to plug it in). So if you want analog, this might warrant consideration.

Well my funky front panel combo headphone jack makes me nervous about going straight analog. But i guess if I had to, I could plug it into the back panel. I may have to get cable extenders. It also seems a bit pricey, but I like Sennheiser phones and the auto-mute on the mic boom.

I would offer my headset as an option but it’s even more expensive than that one.

You may need an adapter for your combo jack. Something like this (haven’t used this particular one myself): 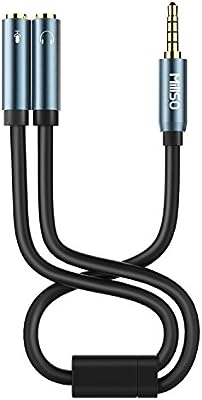 You can always lookup your motherboard specs and find out exactly what kind of jack it is to make sure you get the correct type of adapter.

I have a razer kraken 7.1 USB headset. Its actually preotty nice, though the audio settings could use a tune. However, I have 0 idea how to make the tools in linux work. BUT they do work.

Mic is good, sound is good. Wouldn’t recommend otherwise. And I chose the USB one because they have the DAC in the headset, rather than having line noise via 3.5mm.

I’ve played with a couple of cheap USB sound cards with my desktop, and noticed a lot of static and crackling, at least in Wine. So I may have to stick to onboard audio after all.

Linux usually works with devices that are USB audio compliant and don’t require an audio driver in Windows. But my static problems with Wine make me wonder if any USB device will work well.

Thanks for the suggestions. One co-worker suggested a Logitech G450, though he said it was kind of fragile. Any thoughts on that?

There is no G450, however there’s a G430, which I have. It’s “OK”, fine for communication and gaming, but not if you’re looking for good sound. Mine has a wonky cable on the remote, and as on most headsets the volume wheel is kinda shitty (produces imbalance between both ears). But turn it in the right position and leave it there, you’ll be fine.

Cable between headphone and remote is kinda long, but I solved that by laying it around my neck and clipping the remote to the cable.

Anyway, some issues might be related to me buying it “used” on Amazon (was still new, maybe out of the box once), but I can’t day it’s fragile. I (or the cat) dropped it a few times with no issues.

What is your budget?

Normally all USB headsets should work with Linux. I’d advise against buying “surround sound” headsets because that’s more often than not just a software filter and you pay a premium for that. Good stereo headphones will serve you much better imho.

If it’s an option for you - I would recommend getting a decent pair of headphones and a standalone mic.

You get better quality components for your money, and it’s more versatile.

I’m obsessed with wireless headsets for some reason. I just hate having wires attached to my head.

http://a.co/1hBUPk9
I use this so that I can cyberbully scrubs from in the kitchen. It does require tweaking to work fully with pulseaudio.

Linux usually works with devices that are USB audio compliant and don’t require an audio driver in Windows. But my static problems with Wine make me wonder if any USB device will work well.

if it is ok in ALSA will run on JACK too

Pulseaudio is good, but never known it not to need tweaking!

My budget has some flexibility, but I was hoping to keep it to around US$50. Since experimenting with a couple of cheap USB audio cards (that both work great in Windows), I’m now afraid to use a USB headset. That said, anyone know if this one will work with Linux: https://www.trustedreviews.com/reviews/sennheiser-pc-363d.
Or if it can be used without USB? There’s a used one for sale locally.

My hyperx cloud 2 works well in my experience with linux (using the usb sound card in stereo), and can be plugged in with analouge connection (4 contacts, one for mic). I find the sound great for music and games, but do only use stereo. If you can find a reasonably cheap pair, I would recommend giving them a try.

@anon42572516 Another co-worker recommended a HyperX, but he had no experience with it in Linux. You say you use it in stereo mode, implying that it has other modes. Does it do virtual surround in other OS’s?

I bought the Sennheiser PC 363D. It sounds great with music and games, though I haven’t tried the mic yet.

I did run into the popping and clicking with the bundled USB DAC. I had to change a line in /etc/pulse/default.pa from:

This disabled something called “timer based scheduling” and completely disabled the popping and clicking I was hearing on USB audio devices in Wine.

There is a button on the usb controller that supposedly makes them 7.1. I have only used that on windows once or twice, and have no idea if it makes it receive 7.1, and convert to stereo, or add echos, reverb, etc, to make surround “sounding”.