I'm not a big overclocker normally, but thought I'd pick one of the G3258 chips up on the cheap and see what I could do with it on the stock cooler.

I'm currently running a stress test on AIDA64, stable for 1 hour at the following: 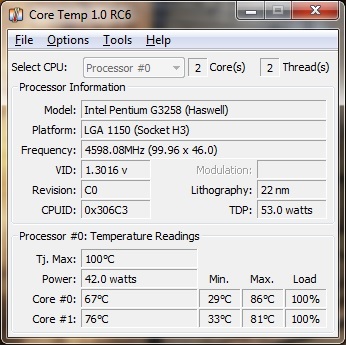 Do you think my current temps are too high?

Just wondering if anyone with experience of overclocking could give me there advice on what they would do?

I'm also debating which aftermarket cooler to get and what kind of difference it will make on the temps?

Can anyone recommend the best graphics card for a setup like this to get the most out of the system? I was thinking of a 750ti...?

Makes me wonder? I put an aio on mine but have yet to overclock it very far.

:) but i really dont care for gigbyte"s bios and its my htpc. I feel a little silly but thats never stopped me before. :)~

I've done some searching and it seems my temps are a bit high. I've taken it down to 4ghz for now, while I order an aftermarket cooler. I'm thinking of going for a 212 EVO, as they seem to be well reviewed by a lot of people (looking at amazon and pcpartpicker ratings) for a pretty cheap price of £25.

The incredible thing is, I bought a cheap motherboard (ASRock H81 Pro BTC for £32) as a basic office setup for the other half; now I've reclaimed it to turn into a basic gaming rig after starting to overclock out of boredom.

Still only got 1x8GB stick of Crucial Ballistix sport in at the moment, but I'll ad another one now.

Still pretty decent for stock cooler.I have been toying with the idea of actually using my stock intel because i am not oc'ing it much. Realistically, i dont consider the g3258 a good gamer cpu. At least a quad-core.

Sorry to drag this thread back up.

I've kept the overclock stable at 4.4Ghz with temps around the 70 mark. All seems well, but I noticed something a bit strange when running Cinebench R15. Regardless of my overclock, I can only get a score of 320cb. I assume there must be a bottleneck of some kind, but I thought Cinebench was purely for CPU and the rest of the system would not matter? Does anyone have any experience on this?

That is a bit odd. Are clock rates staying at 4.4ghz?

Yes, I applied the overclock to both cores. Also overclocked the cache to the same 4.4 and turned off Speedstep.

Bizarre to say the least.

Ok, so turns out it's just cinebench being odd. Timed them both and it took 2:50 at stock and 2:06 with overclock. After looking online it seems the 320cb is the overclock stat.