Here is a screenshot taken from HWmonitor, I've seen that the max (safe) temp for my CPU is around 62-65 degrees. The temps in the screenshot was after playing BF3 btw...

Under the motherboard section, it lists max CPU temp as 54 degrees.

Which one of these should I be paying attention to when I'm comparing it to the 62 degree max?

I've been assuming it's the 54 degrees... because 44 just seems way too good for the cooler I'm using (CM 212 EVO Hyper or whatever it's called - I can't remember). 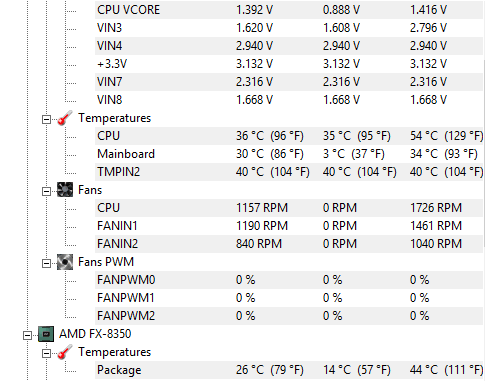 I would use speed fan or coretemp to get more accurate readings.

My Hwmonitor sometimes says my cpu is at 200+ in temp. 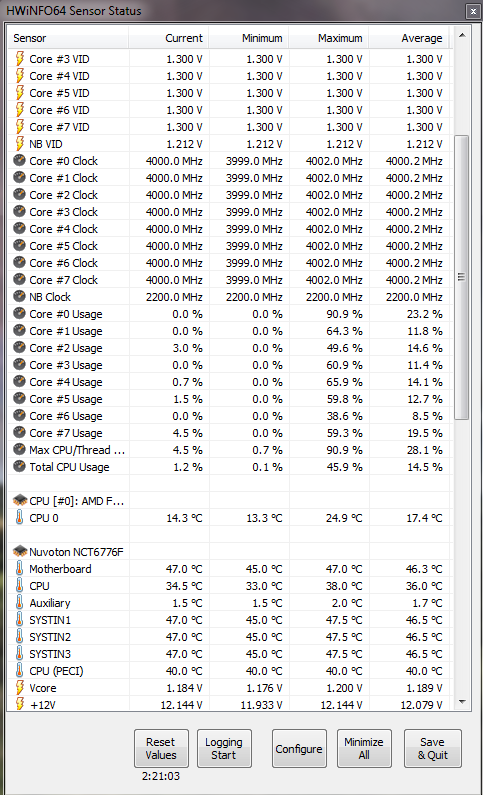 Oh ok. I will do that then, thanks guys.

But then which temperatures should I take off that software? Haha... so many different readings! :O 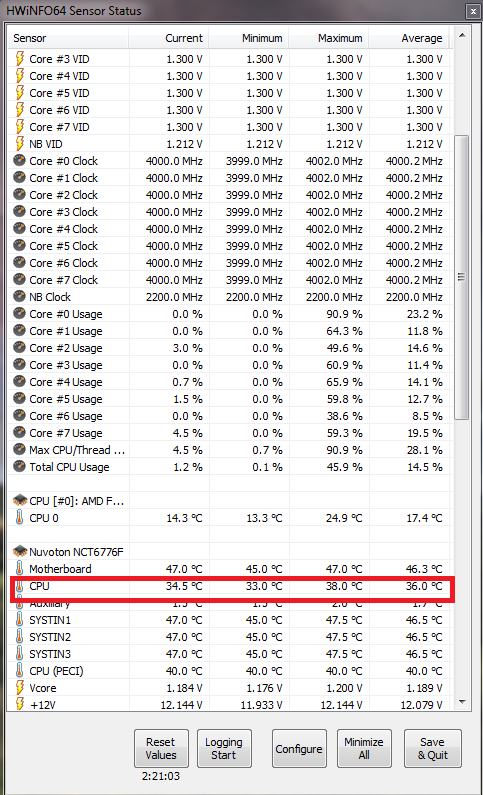 This is an example of how AIDA64 looks, it reads the CPU socket and each core.

Those 3 temps are the current, min, and max. Your current temp is on the far left.

Yes, I know that. But in HWmonitor, there are 2 CPU temperature readings - one in the motherboard section, and a "package" temp under the FX-8350 section. And I'm not sure which one to go by. I'll try some of the other software mentioned though, and see how I go.

Yeah, tested it with HWiNFO64 now as well and my results are pretty much exactly the same. I found another couple of places where people have said it's the package temp that has a max of 62 degrees as well as an email reponse from AMD saying the core/package temp is 62, and the motherboard (socket?) should not go above 70. And yeah, package temp is very erratic at idle, but sits pretty much constantly on 44 at load.

Hey man, this powers values are right. Cause I've the same and i thought its was lower. Also i have another question: Do you know why my asus software show me warning temps? and when i look to aida it's all right. I have everithing on stock clocks, i wanna OC but with this things make me think twice.

Sorry for my englidh, greetings from Uruguay

cpu is the socket temperature - safe up to 70c

cpu#/core# is the core temperature - safe up to 62c

tip: since AMD uses temperature formula to calculate real core temperatures , the most accurate readout is when the cores are around 40c or higher.