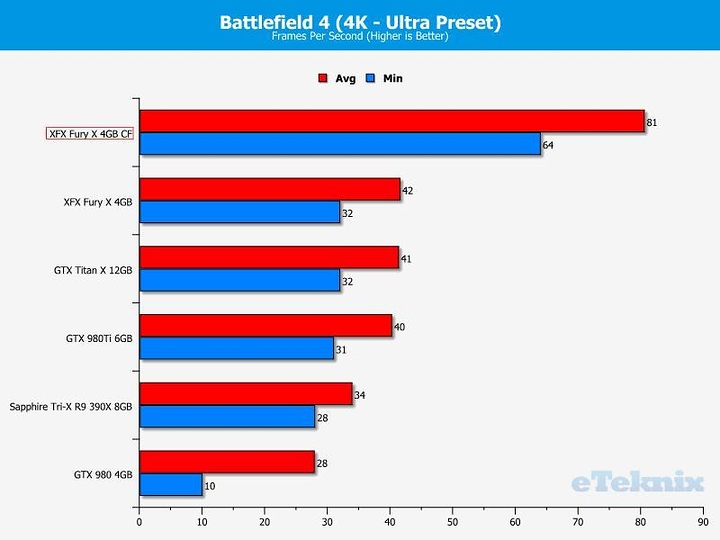 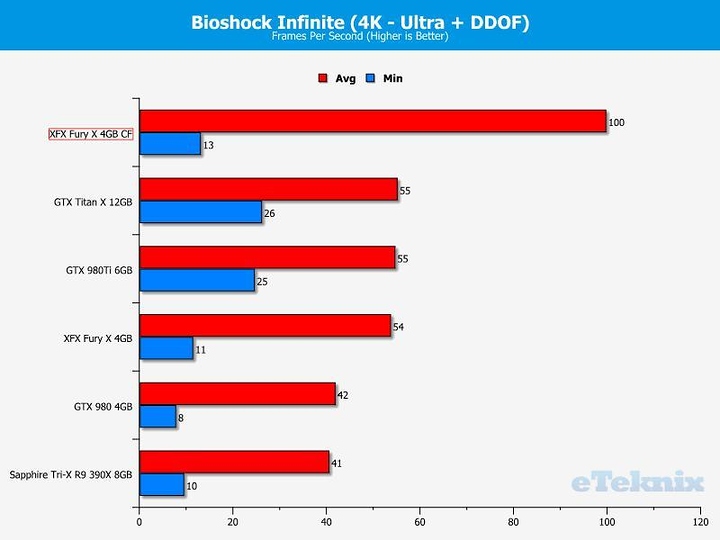 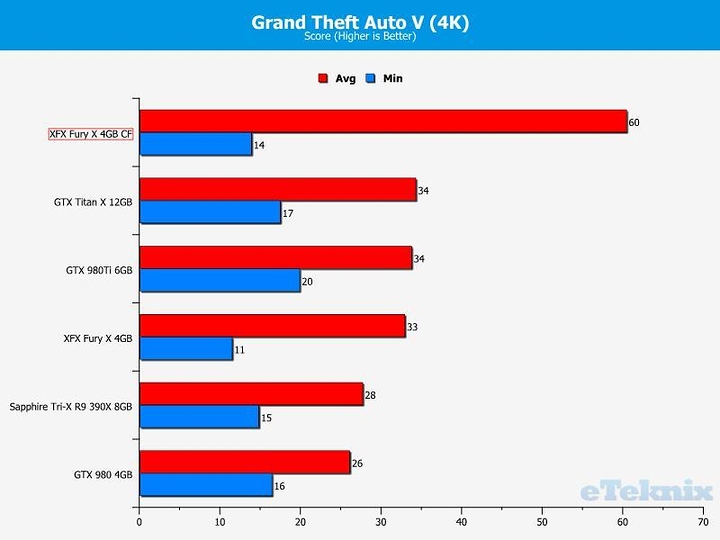 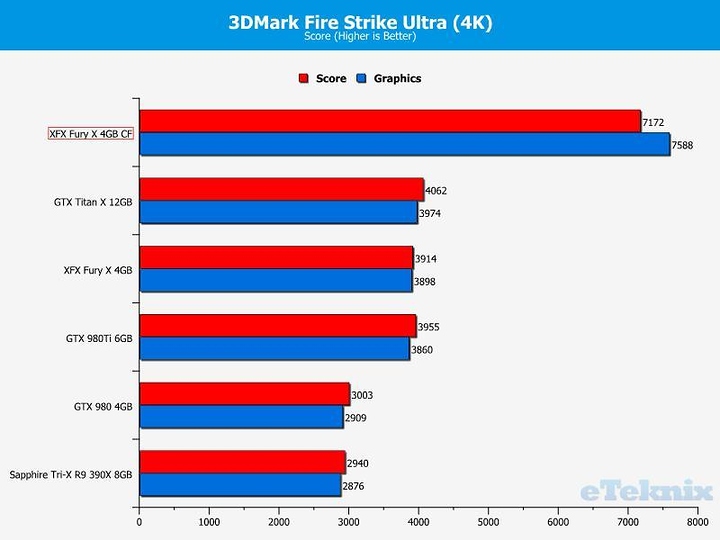 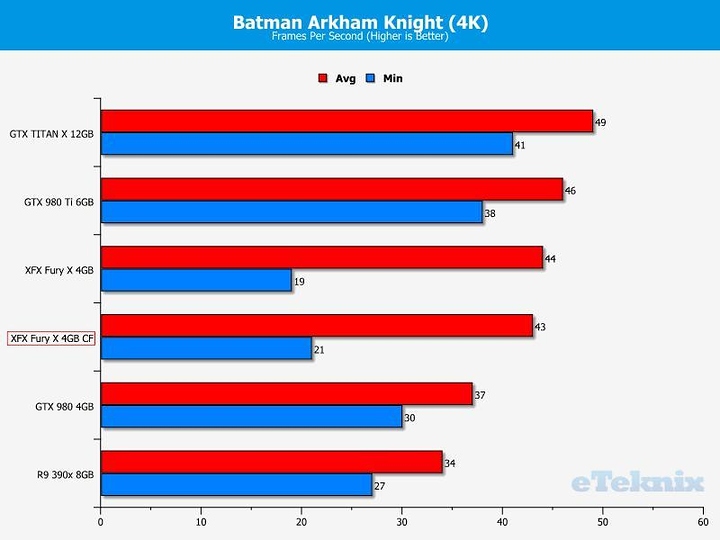 Damn son. I expect these to fly once they get some optimisation and maturity into the drivers.

Plus a single Fury X within 1 - 2 (+ & -) FPS of the TitanX / 980Ti which has relatively mature drivers, not even a week out of release with very immature drivers

Damn.... the sad Arkham scores across the board. Someone call a doctor, that game needs an emergency operation, stat. I hope the game gets fixed by September T_T

Yah both camps are gimped like Zeds mate in the basement

Hmm. Those are good gains, but I'm not impressed. Almost to be expected at this point, really. For example (and I know this card is aging at this point), the GTX 760 4GB became a hot item to have for SLI because of how stupid good it was (and still is if you already have a pair). I'll post the benchmarks that got me interested in the first place if I can find them again. If memory serves, there was one game I was interested in that went from 55 FPS to 109... Wow.

That's not to belittle AMD's work here. I'm simply commenting that this should be expected by now. These are pricey items that have been through decades of evolution, after all. And as is pointed out, these are still new drivers. There's been a lot of speculation about what this will turn into. Hmm... Yes, 2016 will be an interesting year.

P.S. lol that Arkham's lack of optimization tho
P.P.S. I meant this comment in terms of how far SLI/Crossfire has come, rather than cards themselves. But I'm curious as to how people feel about where this will take the market. Will AMD cash in and apply the pressure to NVIDIA? Can they?

P.P.S. I meant this comment in terms of how far SLI/Crossfire has come, rather than cards themselves. But I'm curious as to how people feel about where this will take the market. Will AMD cash in and apply the pressure to NVIDIA? Can they?

Good point, how long has SLI (which Wendell & Logan pointed out is the correct terminology, Crossfire is just marketing terminology) been around, I had SLI GTS 250 back in the day.

Yet both camps suffer from microstuttering problems AMD seems to fare worse, running it in some titles to the point where you actually have to disable it to actually PLAY the damn thing which negates the need for the second card altogether, hopefully with this generation of cards............................... a man can dream

That I wouldn't know. Google would, ask it; I'm getting ready for a job I probably won't get lol

Good luck Bruv, hope you get the job

Cant wait til I can grab 2 of them

If you can actually get them :P

There’s been a lot of negative press about the new AMD cards recently, but there is a diamond in the rough to be found. Despite the poorer than expected, although still very impressive, performance of the Fury X, it didn’t stop AMD employee, Matt Buck...

You owe me a pair of pants /jk

Exactly, thats what I meant lol

I wonder how well the Sapphire cards would hold up against these.

Yes, AMD is usually worse however it seems with the newer GPUs (I'm running two R9 290s) the problem is much improved. I don't notice it.

This scaling is pretty impressive though.

The scaling isn't bad but the I think it would be more impressive if we could see how that is in comparison to Titan X and 980 ti both in sli. And then overclocked benchmarks. 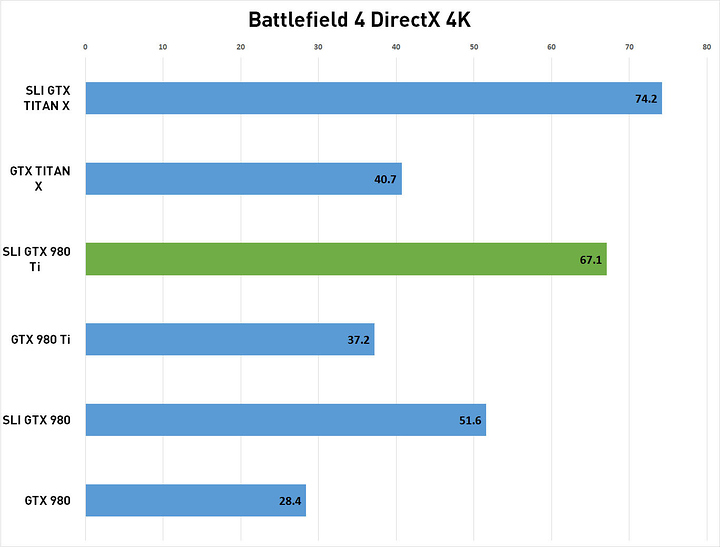 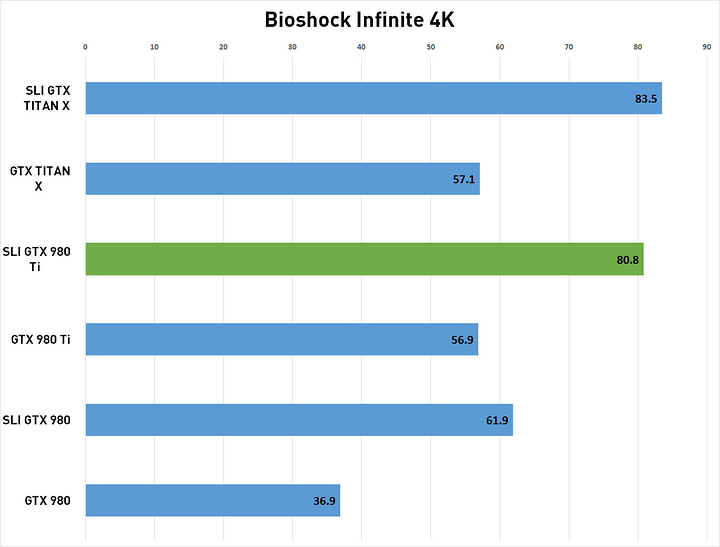 @DeusQain Sapphire cards? as in 390x?