I currently have a corsair mid tower. I love the cable management (plastic guides behind the motherboard) but hate the drive rails as they have metal studs held in place by rubber that inevitably disintegrated in this dry climate after a few years.

So I’m looking at Full Tower cases and I’m having ‘fun’ finding any that meet my needs. The closest I’ve found thus far is the Fractal Design Define XL R2. The only complaint I could really find with it is the lack of cable management and apparently a slightly annoying mounting for the PSU. Here’s what I’m ultimately looking for -

Anyways, I’m hoping I just overlooked some candidates. I was getting frustrated at the number of full towers that forsake internal drive bays for more cooling options, but I’m not planning on having a super overclocked / watercooled beast either. Any suggestions appreciated, thanks!

Edit
Looks like the Be Quiet Dark 900 fits the bill mostly. The Pro Rev 2 upgrades the front panel IO but adds a PSU shroud (that is fortunately removable) but has 5 drive bays instead of 7. Plus they’re considerably more. /shrug.

The Entho pro has worked well enough for me in my vfio set up. Have an r9 390 in the last pcie slot on my motherboard. Should tick most of the other boxes. http://www.phanteks.com/Enthoo-Pro.html

Assuming you put your requirements in pcpartpicker.com and reviewed those options?

From what I can see of the photos on the Entho Pro the last 2 expansion slots (7&8) are right above the PSU. This is what I’m trying to avoid, the GPU being right up against the PSU. Also looks like the drive rails have the same tooless stud/peg design that my corsair has. It is nice that it has cable clips in the back and it doesn’t seem like a bad case otherwise. It just wouldn’t be an improvement over my current case. Thanks tho.

edit Oops, looks like I was slightly off about the rails, looks like the pegs are part of the rail itself. On the corsair I have they are literally held in place by a rubber grommet of sorts. Once they dry out my drives start vibrating loudly and aren’t really secured very well (the pegs fall out if I remove the drive). Hence my aversion to this sort of thing.

I’ve tried a few searches, it’s just the devil is in the details and sometimes a spec sheet doesn’t tell the whole story. I’ve been looking at photo’s/reviews and though someone might have some first hand xp to share.

Just was making sure you were aware of it, usually my first stop when looking for something that specific, any reason you are putting it all in 1 box? (just is a lot of drives for 1 box)

It’s by the nature of doing VFIO/VGA passthru that I need two video cards. I mean I could use an APU, but then I’d be limited by the number of cores on the CPU side. My MB has 3 x 16x slots but unfortunately I have to use the top and bottom slot because of my IOMMU groups. I could get another Mb too but I’d be back to square one anytime I upgraded my MB and the groups changed.

Oh, the drives. As I said ZFS. I don’t only play games and I plan to replicate my snapshots up to my server also using ZFS.

Why so many slots 2 gpus and what else?

Oh, the drives. As I said ZFS. I don’t only play games and I plan to replicate my snapshots up to my server also using ZFS.

What board do you have? What 2 gpus?

I guess I’m not explaining it well? There is no air gap between the GPU in the bottom two slots and the PSU. And again I’m forced to use it those. It’s not that I’m using all my PCIe slots.

I have a NAS already. /sigh. Look nvm. I have my reasons.

Maybe something like the 750D? I had one before and liked it they have some newer ones with different ascetics (760T)

Could make the 5.25 into hot swap for more drive space

I saw the 750D too, but it unfortunately has the same drive rails as my current Corsair case. Which really don’t last in my environment.

You pulling drives in and out alot? Could throw a hot swap cage in the 5.25 for ones you take in and out a lot

Nope never take them out unless I have a failed drive or need to move things around due to an upgrade. Like I said in the OP and my edit above the rubber breaks down and nothing is really holding the drive in place anymore. Starts vibrating like crazy.

If I’m going hotswap I might as well look at a server case then. I dunno if things have changed over the years but those addon 5.25" hotswap bays were pretty hit or miss. Especially when it came to linux support. Well that was probably due to hotswap support for the SATA cards/chipsets more than anything… Anyways like I said in the OP wasn’t really looking for hotswap.

rubber breaks down and nothing is really holding the drive in place anymore. Starts vibrating like crazy.

Be that as it may it doesn’t solve my original problem with the GPU. It’s fine I’ll figure it out. Doesn’t take 10k drives for them to vibrate when they’re not screwed or fastened to anything solid.

From what I remember the rubber pins were in the sleds and were in pretty tights, never had an issues when I ran it for like 1.5 years. How does that not solve the gpu issues? 9 expansion slot and you can face the psu down.

Thanks for the suggestions, but I don’t intend to buy another Corsair case. As I’ve already explained it’s not a solution for me. I’ll probably just go with the Fractal Design or Be Quiet case in my OP.

That sucks because the 780t has everything you want I think.

How about Thermaltake Core V71? 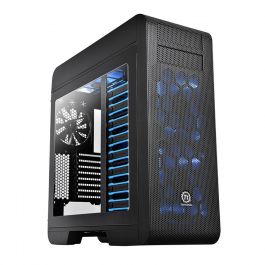 By the looks of it the bottom PCI expansion slot should have some space between the PSU, tough the pictures might be misleading. Don’t know how long graphic cards you are able to mount there if all the HDD drive bays are in use.

It has 8 x 3.5 bays, but difficult to say if the drive trays are good or not. Cooling should be adequate, looks like there’s lot’s of options for mounting case fans. Cable management looks okayish, but the front IO is on top of the case.