I was hoping someone here could shed a little light on how I can get this config running.
I have a stable freenas server running a Plex, and virtualbox jails. Serving up CIFS, iSCSI, and NFS on top of that.

What I am hoping to do is run an ESXi VM inside the VirtualBox Jail, but I keep getting purple screens at installation.

Thanks for any info! 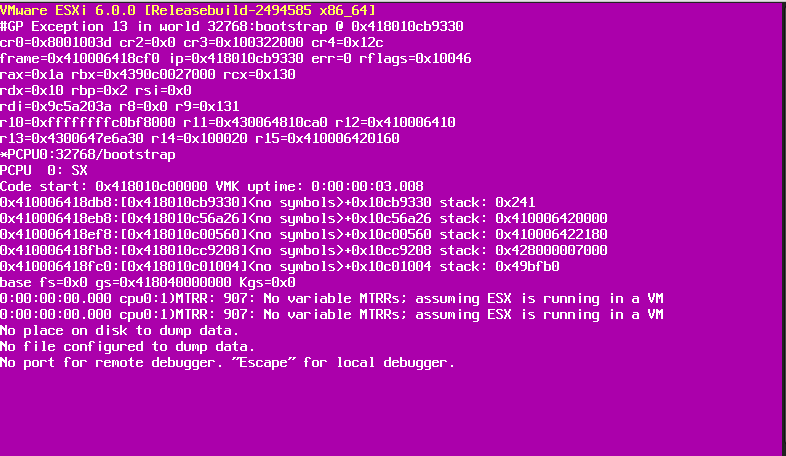 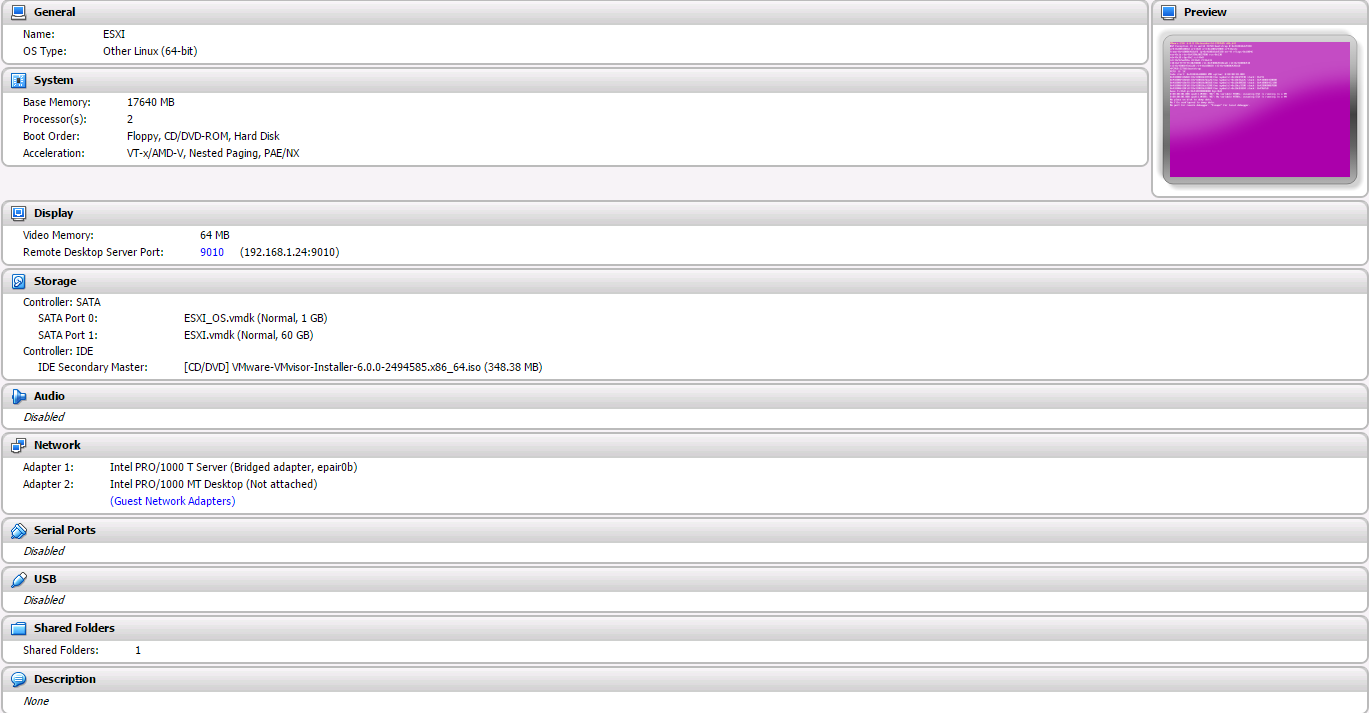 Are you trying to run ESXi inside a VirtualBox VM? If so, that's your problem - you can't run a low level hypervisor like ESXi in virtualization software that runs on top of a host OS (VirtualBox), as it does not have low level hardware access.
What you can do, though, is install FreeNAS inside ESXi and pass-through the SATA/SAS controller, assuming the drive ESXi and FreeNAS reside on is on a different storage controller (i.e. PCIe SATA/SAS controller or RAID card, USB flash drive or hard drive).
The alternative is just to have a dedicated ESXi box.

That is not accurate - current ESXi isn't as low level as it used to be in the ESX days. I used a bunch of virtualized ESXi to test provisioning automation in my lab. Never tried it in a FreeNAS jail though.

if i was going to guess it is a bug in virtualbox similar to the one that occurred with esxi 5.5 an unimplemented MSR.

I meant low level in that there is no host OS requirement (or rather it requires there be no host OS) for installation - it is the host OS.

Also, OP, someone did ESXi 5.5 in VirtualBox here, however, it is not very stable. Unless you have no other machines you can run this on (even a low spec machine just for Puppy Linux VMs), I wouldn't recommend this, if for no other reason than performance limitations (especially inside VirtualBox).
However, I do see one upside to this: The cheapest vSphere package with Data Protection (their backup solution) costs $995 with a minimum of one year of basic support ($273). VirtualBox can do snapshotting for free, though you would be snapshotting the entire ESXi installation. But, if you don't want to mess with any backup software on the ESXi guest OSs (that would be fun...pass-through a virtual disk twice, assuming ESXi didn't crash), and don't have $1268 lying around, it's your best option. Plus, that ZFS pool will be much easier to access for storing backups on than if you were doing FreeNAS inside ESXi. I'm sure there are more ways to backup (and probably cheaper), but it's been awhile since I last worked with ESXi.

Considering VT-d can now be found on consumer CPUs, who knows, my next build might virtualize both my DC and my gaming rig.

Running ESXi inside a VM on virtualbox will definetly not be stable. It has more due to with ESXi sending virtualization commands to virtualized hardware.... it's going to be buggy and will not give you a very good result. This goes for nesting any hypervisor inside of another hypervisor, usually not a good thing.

Just adding on to what others have said. ESXi relies on low level hardware access, being that you've already got a VM running inside a hypervisor, you're way to far from bare metal to make that even feasible, much less stable.

F.Y.I ESXi is best off when configured like this:

You're going to have much better luck using one low level hypervisor instead of 2 mid level ones.

He does not have a VM running in a hypervisor since a Jail in BSD whether it FreeBSD or FreeNAS is not a hypervisor. A hypervisor lets you run different kernel versions a jail does not it has a shared kernel. Jails don't have virtualized hardware. While i agree that i don't see much point in putting an esxi into Virtualbox he might just be see if he can do it. There are products out there that support a virtualizing of esxi servers but they are made for Data Centers. Xen i know can do it but it more design metal ->XEN->Guest Hypervisor->Guest OSes.