I decided to go ahead and show off my frankenbuild PC. Hope you guys get some amusement out of this!

Cooler: Delta branded cooler from the 5290 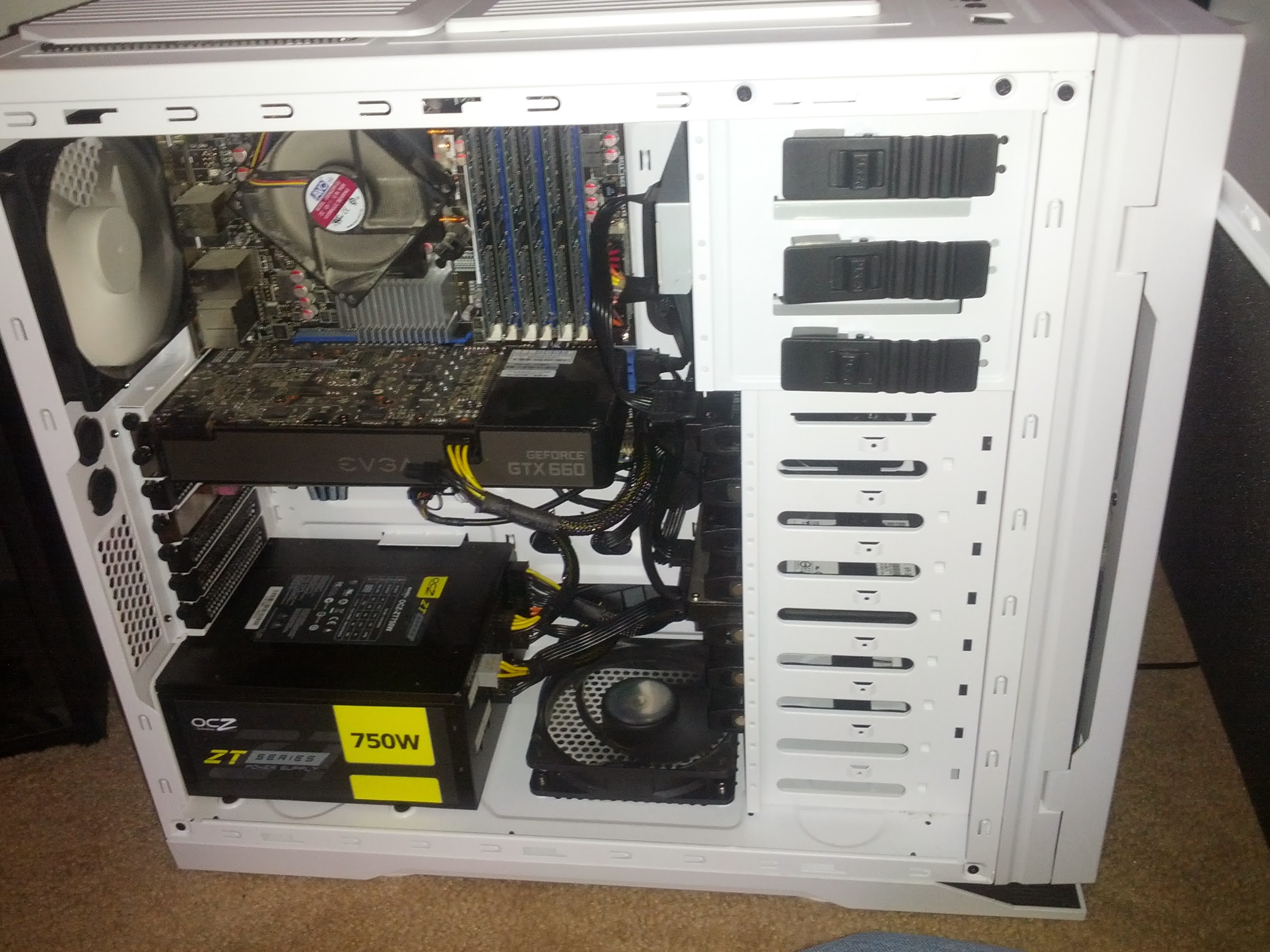 Aright, let me know what you guys think! Do you have a build as janky as this? Post it down in the comments.

That's pretty cool, I might have one to beat it. It's not as janky as far as random parts, but it's still pretty ridiculous. 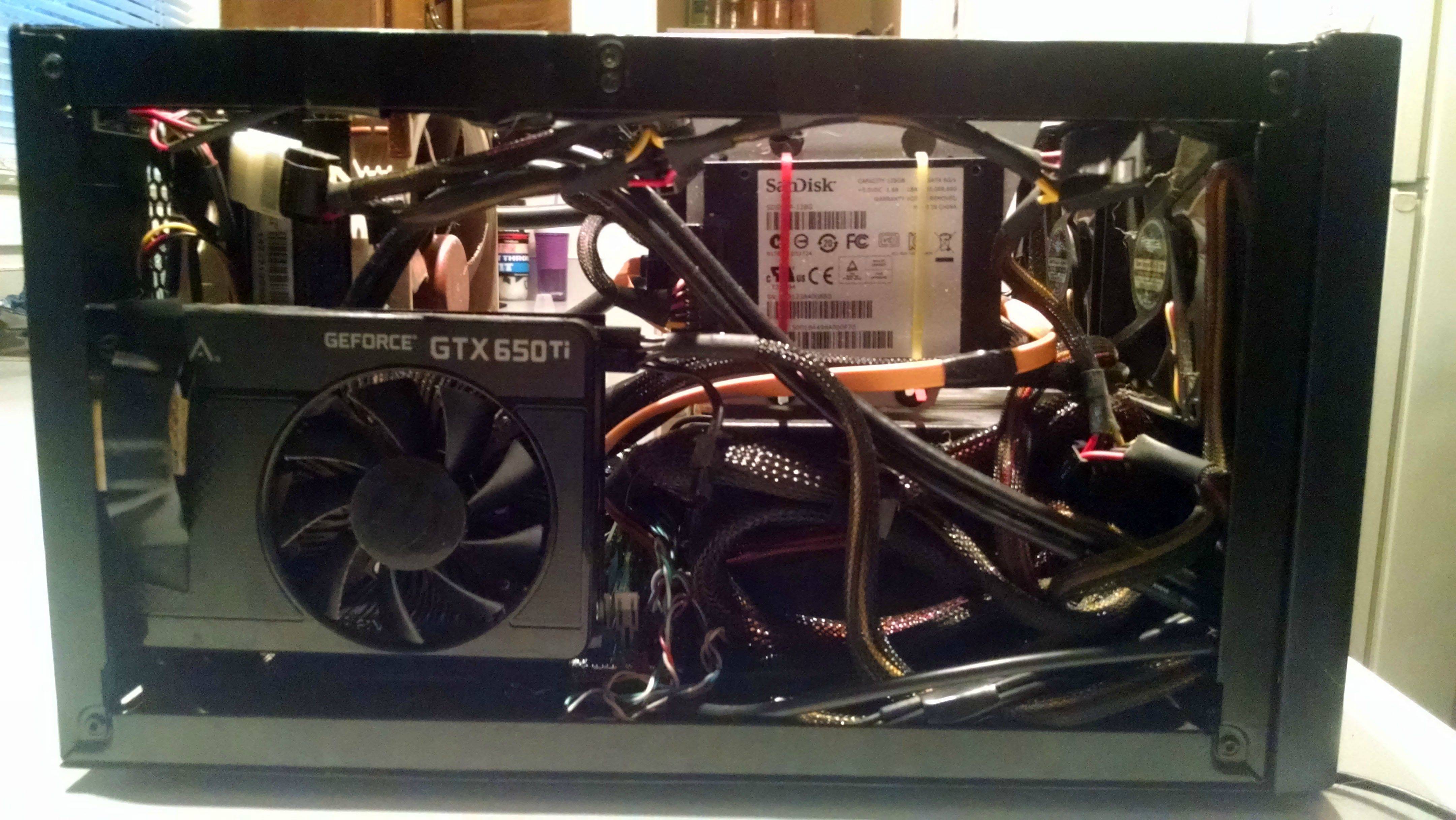 So in my current Mini-ITX rig:

So basically I was curious about how powerful I could make a Mini-ITX machine into. I originally started with a way smaller case which I may some day build in again because it would make an even better LAN machine, but it also makes it impossible to overclock, and pointless to have a K series processor. It's the highest power to size ratio machine I've ever seen personally and it really kicks ass, especially for LAN parties where I can bridge the Integrated graphics, and have a total of 9 monitors with a displayport hub if I wanted. 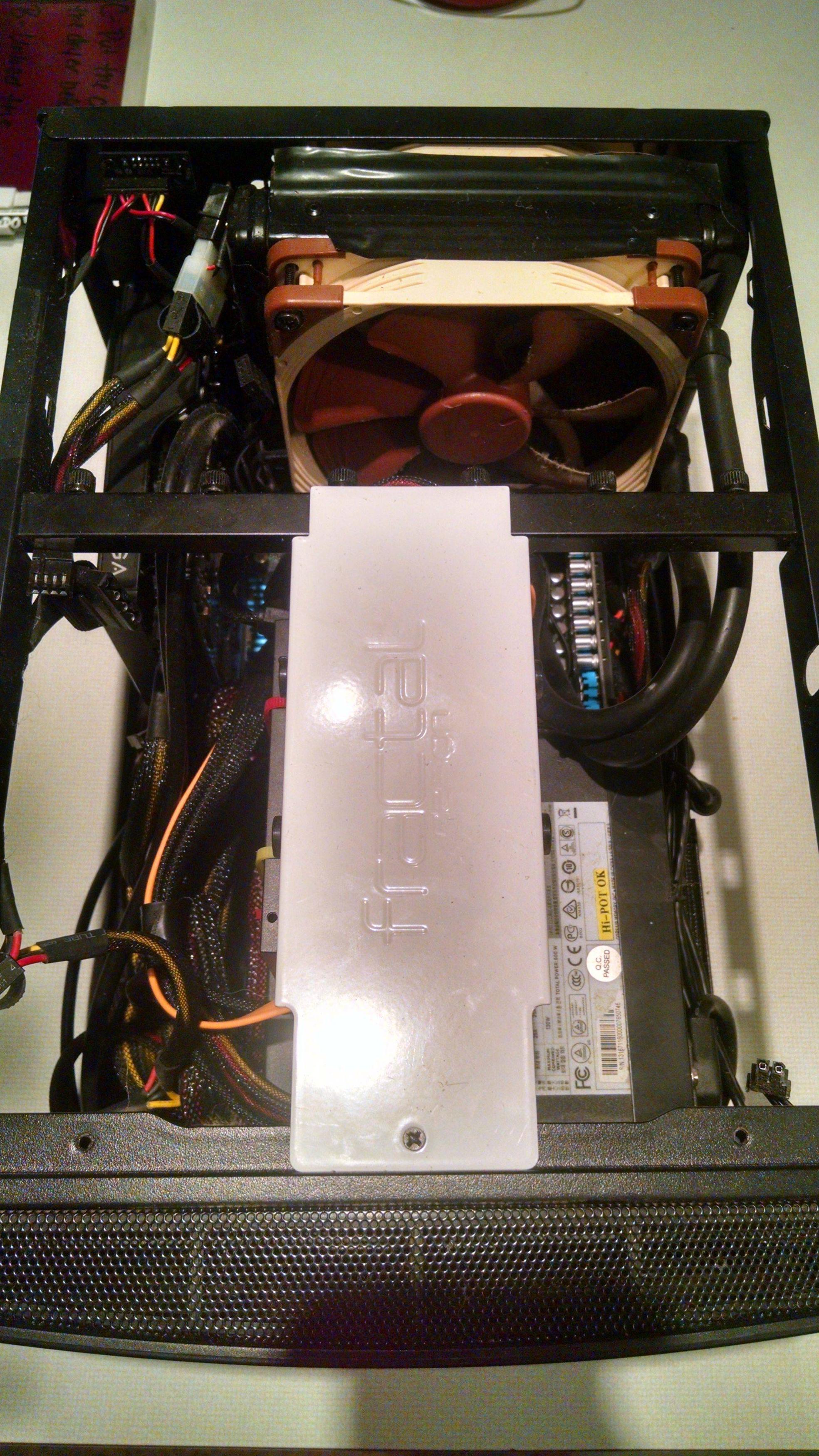 I needed to increase airflow through the case, so I managed to rig all of the Hard Drives onto a single drive carriage, which is a little odd, but it works. 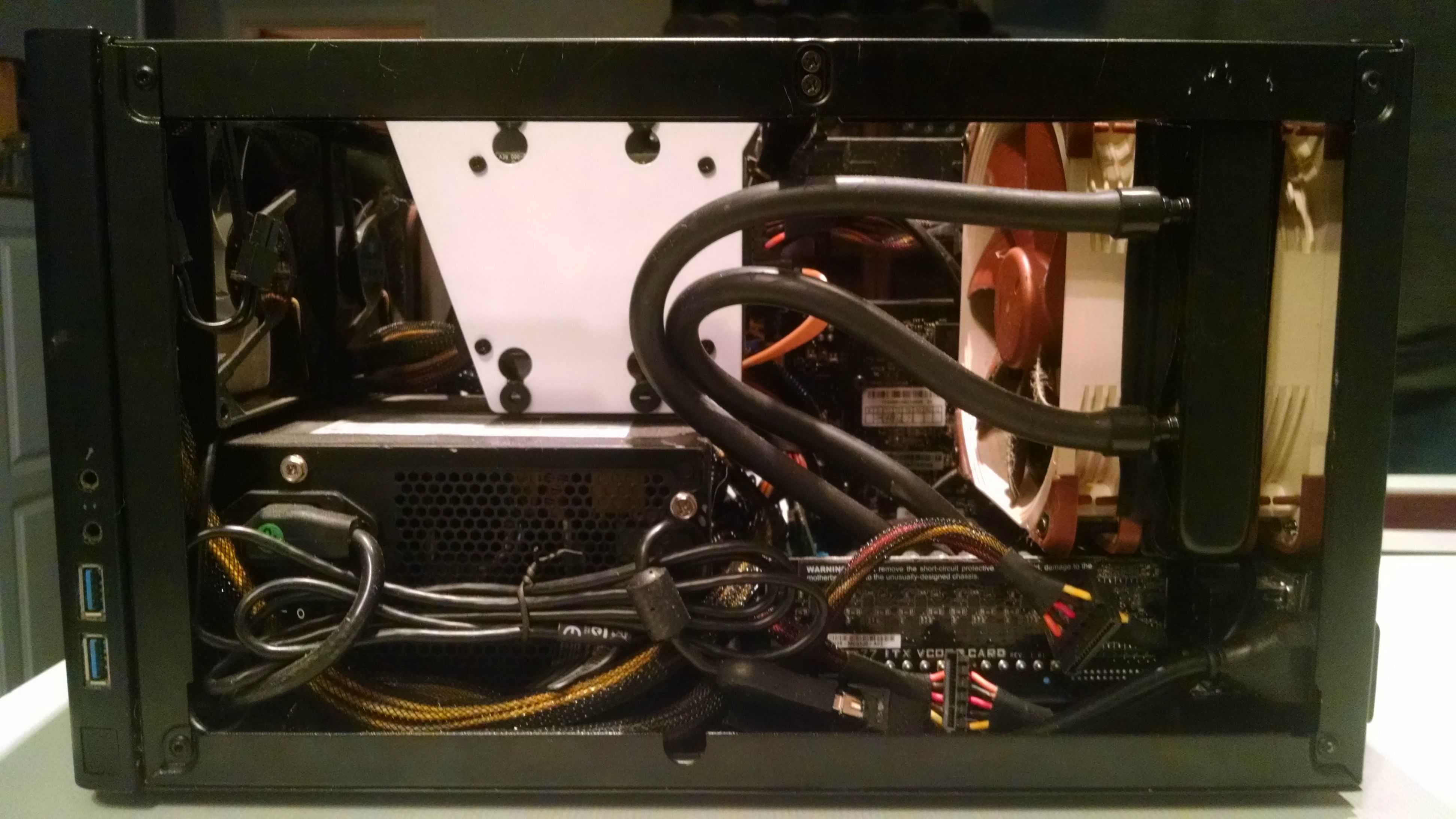 As you could expect, cable management is stupid difficult in this thing, I need to jump for a modular PSU at some point but I got this one at a stupidly good price. 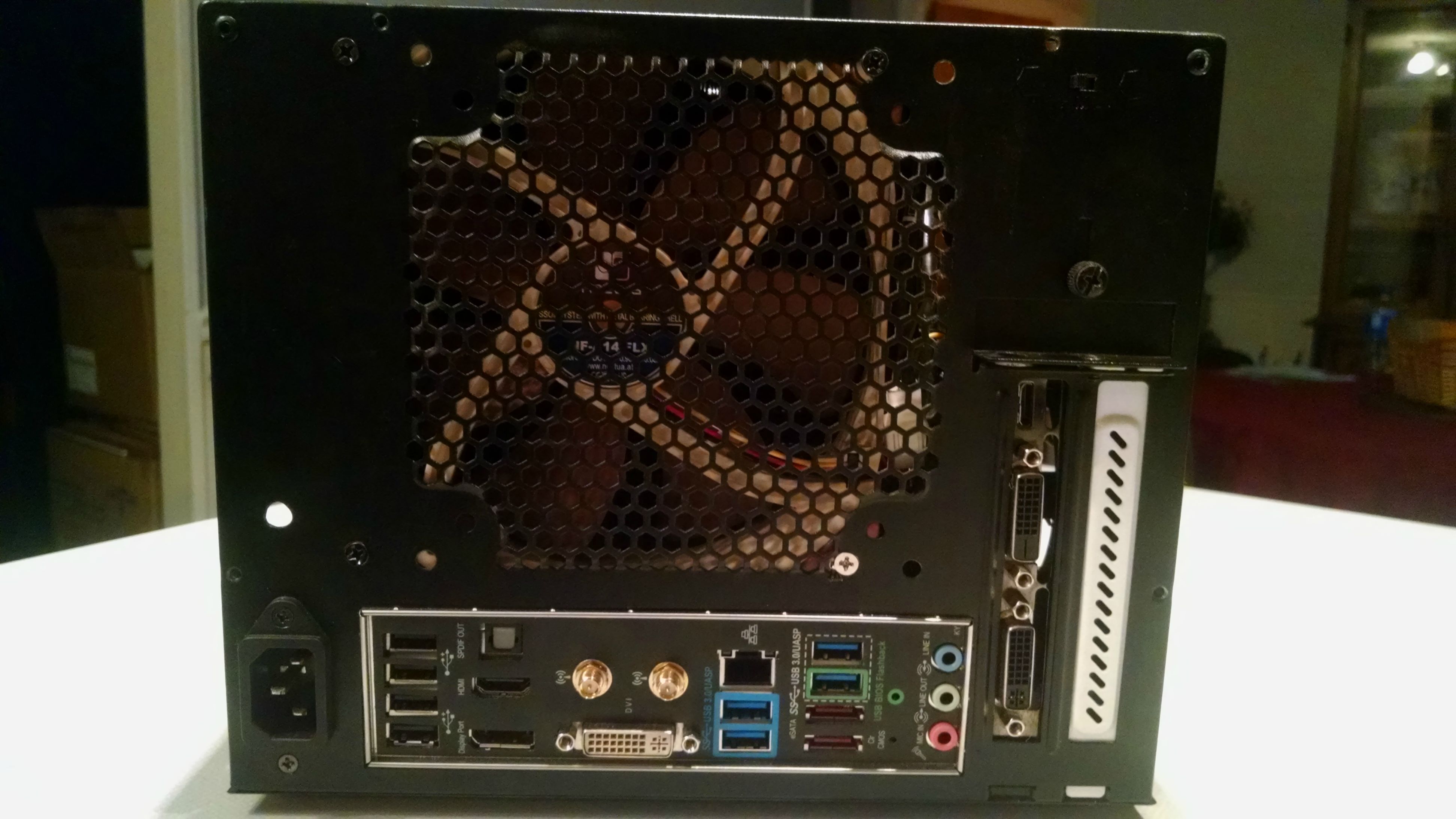 You can see that I had to shift and re-drill the mouting holes for the rear fans/radiator. The radiator reservoir made it too wide to accommodate for the GFX card. 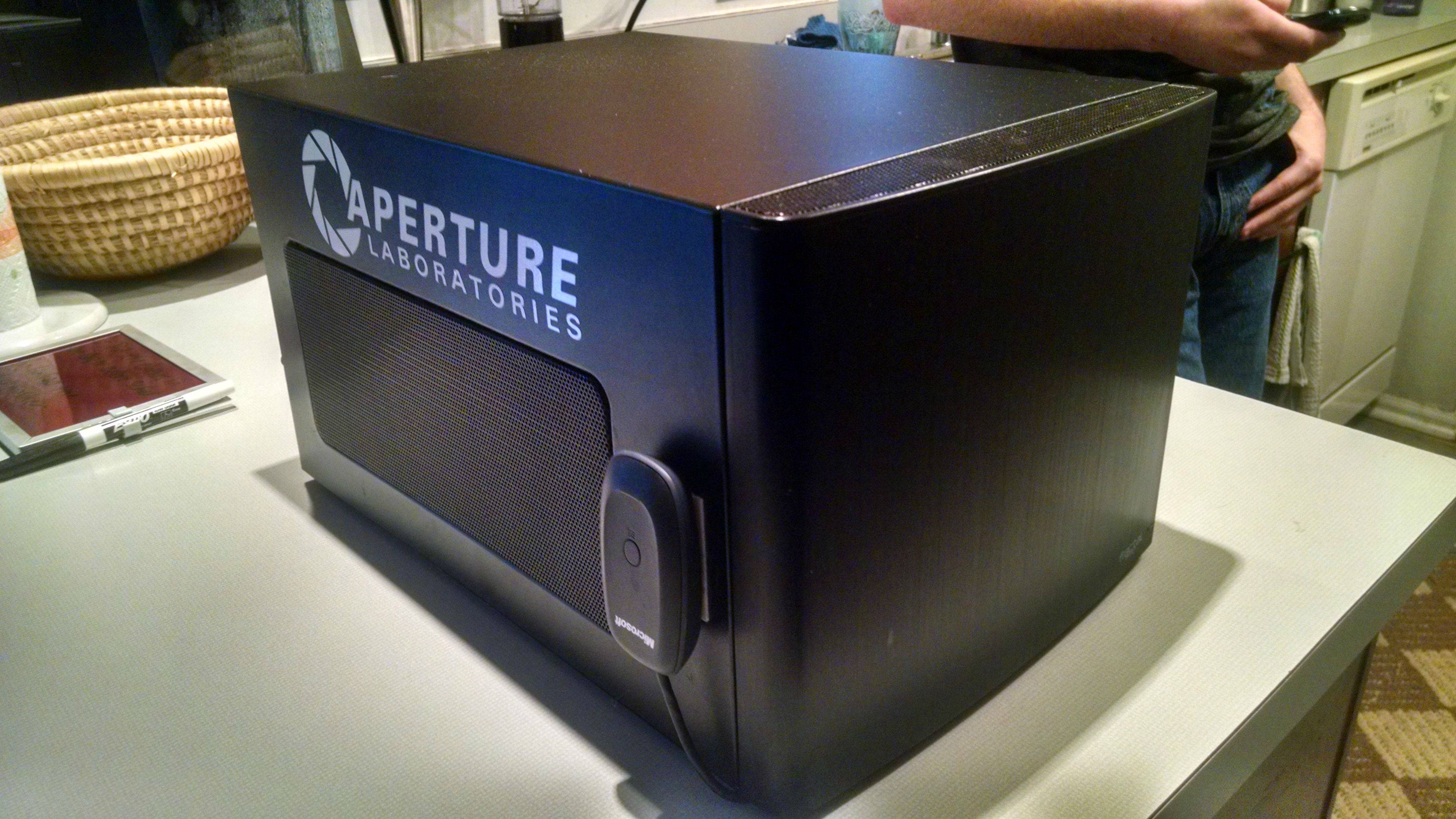 However it cleans up quite nicely, nice and compact which again, makes it killer for LAN parties, although it weighs a ton. The little adapter on the side is an Xbox 360 wireless remote receiver. I originally had it hidden behind the front panel, but it killed the signal range.

My next upgrades will be the obvious GPU, I plan on grabbing a 780 when it drops in price a little, the maybe doubling my RAM.

Nice build! I like the mods you've done to it to get it to work all together. Have you thought about getting an ITX sized 970? It should help a lot with both cable management and airflow over a 980.

Well, as I can actually fit just about whatever I want, I'll likely go for a full-sized card next time around anyway, and it'll probably be a 780, simply because the whole 9XX series are so damn expensive thus far. A 780 would be well over twice the performance of what I have now, and I'm even still satisfied with the little 650 Ti.