How should I do with this? Because it takes the computer all the damn CPU to do this EVERY TIME I RESTART THE COMPUTER, maybe even if I restart Steam. 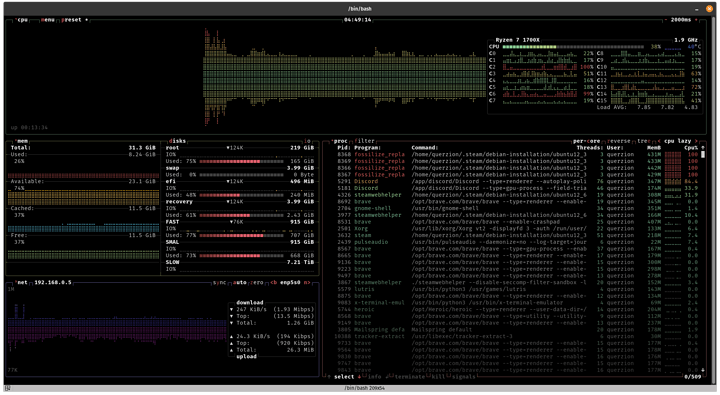 EDIT; Not Steam… I think it’s the FlatPak Discord that is the damn problem.

EDIT; Nope, not that either, since I just killed the processes, they haven’t come back. Irritating.

Tried a newer CPU? the 1700x is fairly ancient at this point and could be a factor

1700X is nothing to scoff at. I’ve just recently upgraded from i5-6600K and it performs sufficiently even now.

Maybe shaders were being processed at the time?

Try to set your steam homepage to your library instead of the store page because the chrome renderer might be having a stroke or something.

So your cpu spending its time doing work is not actually a bad thing.

Every second your CPU is doing the amount of tasks at a specific rate (GHz), it is the processes that have to wait their turn for CPU time to get their work done.

If you have too many processes competing for resources, and processes being stacking up, then you have a problem because the CPU cannot keep up with the work that needs to be done.

That said, the steam client shouldn’t really be consuming 38% for a sustained period of time. Is the process stuck due to a botched update? How did you install steam? What happens if you just let the process run and finish its task?

Edit: a quick google of the program name takes me to their github page.

Fossilize is a library and Vulkan layer for serializing various persistent Vulkan objects which typically end up in hashmaps. CreateInfo structs for these Vulkan objects can be recorded and replayed.

So what I think is happening, is that when you start steam it attempts to pre-cache your vulkan shaders, or does some kind of work related to shaders. If you disable this setting in steam menus that might resolve your problem.

I terminated the shaders, and it didn’t happen again. My computer runs perfectly. It’s a really good CPU, and it’s not like the CPU market has changed really, there are some improvements, but it’s still an 8 core x2 threads cpu, one of the most talked about problems with the ryzen 1x00x was that it sent the process back and forth within itself before computing it, which was fixed with the ryzen 2x00x series.

I would very much like to update, but it’s expensive and I live on existence minimum, meaning I will have to sell everything I own in order to buy a new computer atm.

I did that, but It still opens the store. It’s irritating. It was shaders being loaded when the computer was restarted and it stopped after I terminated the processes. I haven’t experienced it again. I wonder why it started though.

When I let it finish, it took about 15 min, but when I restarted the computer it would do it again, so what I did… Was… I terminated the process, and it stopped hogging the CPU at reboot. Fixed.

It was the first time that I have ever been in the situation with the CPU I have. It was only using some of the cores though… It was steam shaders that was hogging the CPU, and I have no Idea why, but it hasn’t happened since I killed the processes.