Short story, I need a way to force a monitor or TV to display a blank white screen at power-on, indefinately (no sleep or black screen timeout) and without user intervention after initial setup. Ideally this should be as idiot proof as possible because the target audience is assumed to be tech illiterate. As general as possible a solution would be good but I’m open to any ideas.

Weird request here. I’m working as a scientific glassblower and need a source of polarised light. It just so happens that displays would be a perfect , cheap, conveniant source of polarised light. Commercial products can be expensive but surplus/defective monitors and TVs are cheap and will greatly benefit the glassblowing community if I can make this work. What I need is a way to make a display show nothing but a blank white screen for as long as it’s powered on (preferably at maximum brightness). I’m not opposed to using a Raspberry Pi as a last resort but would prefer something simpler (resistors in the input or the like). The plan is to publish an entry in the Journal of the American Scientific Glassblowing Society, detailing how a school or small shop could build a polariscope, for far less than the cost of a commercial produt, using a surplus monitor. Anyone providing substantial help would of course be creditited withing the article.

Technical: When you put a piece of glass that you’re working on between a source of polarised light and a polariser you can see the strain that you’ve introduced into the glass by heating it. This happens because the strain twists the light and the second polariser blocks the light distrupted by the glass, showing where you have a problem. See https://en.wikipedia.org/wiki/Photoelasticity

Any help with this would be appreciated. There aren’t many scientific glassblowers out there (less than 500 in North America) and my technical/programming abilities are very limited. I’m a chemist by training and apologise if any of the above is nonsense.

I’m not opposed to using a Raspberry Pi as a last resort but would prefer something simpler (resistors in the input or the like).

Well, unfortunately it can’t be quite that simple, but I did find an IC which can output a plain white NTSC signal. This requires a display which can accept a composite input. The cost of all components to integrate this into a usable package could end up being similar or higher than the cost of a Raspberry Pi (especially with such a small target market), but the setup would be very simple for the end user.

Hmm. The simplest thing I can think of is to just find a surplus monitor, disable sleep, and cut some cables/connectors on the internal display so that it would only show white.

using a raspberry pi, you should be able to make a empty .html file(maybe set the whiteness to which ever level you want, as background), and load this with chromium in kiosk mode, on start, and disable the screensaver offourse.
As an expansion of this it is possible to actually remove the desktop environment, and just let Xorg live, for some extra performance.
This would however mean there is a startup procedure you need to go through of approx ~30-45 seconds before you hit a X-environment e.g. it wouldnt be instant on turn on of the device.
Dont know if you could get something like a arduino which can output monitor signals, but it’d require some code tinkering, and some embedded know how, which can(it is) be tricky.
As for the idiot proofing, id suggest glueing the connectors, and investing in a titanium safe, and even then, the last idiot has yet to surprise me.

Thanks folks, some good ideas here.

Does anyone know if pulling the LCD out of a display, leaving only the diffuser and polariser will generate a blank, white screen? That’s my understanding but if I’m wrong it would save me tearing appart a monitor for nothing. In the long run I think that by be a more robust solution than a Raspberry Pi.

I have some experience with this. Pulling off the polarizing film will make the display appear white. I’ve done this to some old monitors to try and do the “privacy glasses” trick. Anyone with polarized sunglasses will see a slight image but otherwise itll appear white to the naked eye.

Be warned though, removing the polarizing film from a display is a tedious process and itcould potentially scratch the display. Also, its permanent. You can follow these steps and just ignore the entire glasses section

Finally you can do something with that old LCD monitor you have in the garage. You can turn it into a privacy monitor! It looks all white to everybody except you,...

I think Linus made a video about this along time ago, i may have been his buddy.
Id go check his channel.
If i recollect you could, achieve this by pulling appart your monitor and removing a certain part of the layers.
That would essentially leave your screen white, unless a certain pair of glasses were worn(e.g. a certain frequency).
Id check it out if i were you, if anything it’s 15 minutes of entertainment.
Basically that would just make your screen white on power on.
And presto magic if you buy a pair of 30 dollar(i think) shades you can see the screen content, and no else could,
it’d just be white to them.

@RotaryWombat @Lauritzen They screen would appear white to the naked eye but the liquid crystal layer will still mess up the polarisation. The OP also intends to look at the screen through a second polariser, which will act like the pair of shades.

@dodsno Removing the LCD will work in theory, but I don’t know how it is attached to the glass and thus whether removing it is viable. Attaching a Raspberry would definitely be an easier solution.

Its not idiot-proof but there is this website http://whitedisplay.com/

It should work on any computer (with internet) with a working browser including raspbian on an rpi though it will require knowledge of how to browse a website in a browser which most people should be capable of. Its not the most elegant solution but I think its simple enough to get the job done. I’m sure theres a simpler way to do it via trickery or code but this method requires probably the least amount of knowledge on your part as well as being attainable for others for the most part.

In that case, install qutebrowser and then on startup set the homepage to an html file with this css.

Should include something to automatically fullscreen the page too

It’s been said at this point, but you wouldn’t be able to wire up the monitor’s plug with some paperclips and make it output white. On VGA, the RGB channels are analog but the monitor doesn’t supply the .7 V needed on each for a white signal. Hsync and Vsync would also be missing, so most (maybe all?) monitors wouldn’t display anything, or even detect a signal. DVI is worse; you can’t run a serial link without some digital circuitry (just tying each pin high won’t work), and it’s all serial (DVI uses TMDS for the data channels).

Taking out the LCD, leaving the backlight and polarizing filter in place, ought to work but will be different on every monitor. IIRC, older monitors that use fluorescent tubes instead of LED backlights contain high voltages; I don’t know if they persist for long after the monitor is unplugged. Removing the polarizer, as mentioned above, would defeat the purpose; the whole point is to send polarized light through the glass, and then look through another polarizing filter, right?

It looks like the arduino has enough horsepower to output a VGA signal, there are a bunch of guides online. Hardcoding a white screen should be pretty simple, and it’ll boot instantly. But you’re on the hook for some resistors and the VGA plug, so it’s probably more hassle than a Raspberry.

A different approach might be to just buy a polarizing filter and put any (I think really, any) light source behind it. The uniform plane of an LCD might be nice but if you have 2 filters and a smartphone flashlight, that might be enough.

What about a light box and a polarizing filter sheet?

A school might already have a light box in the art supplies, and one can get polarized film online for relatively inexpensive. Could probably even attached the film to a piece of acrylic so there’s nothing permanent done to the light box. 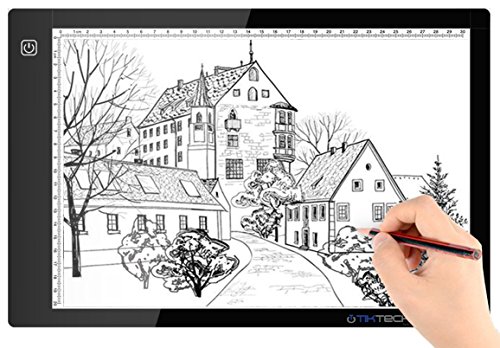 Product Description: - It is super thin and the acrylic surface makes it feel like a glass panel - This Artcraft tracing light pad is a sleek light-up pad, the light from the pad through the paper cle ... 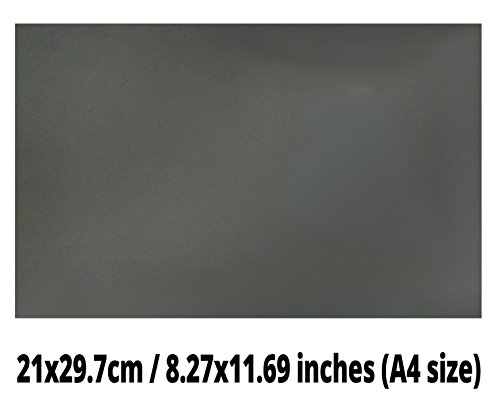 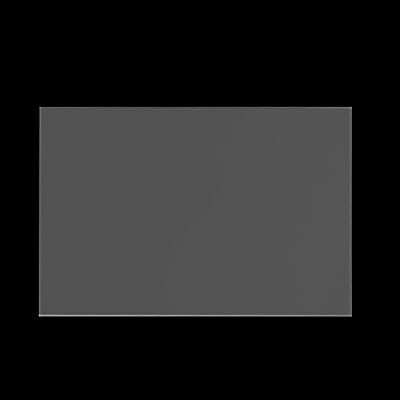 Acrylic sheet is a glazing, signage, window or display material that is unaffected by moisture, and offers a high strength-to-weight ratio. Acrylic offers high light transmittance and can be easily he ...

The problem I see with using a monitor is that to get a plain white signal it will require at least some circuitry. It could probably be done with an Arduino, but then you’d need custom cables and soldering and whatnot. Which is honestly a bit of a pain if you don’t know what you’re doing.

Thanks folks. That gives me lots of options.

I’ve build a small one of these (about 4x6", see attached picture for results) from LED strips and an ebay phone polariser in a small project box, but scale-up is a problem.

The reason I was going down the monitor/TV path in the first place is that they’re a nice source of diffuse, poarised light, with a relatively large form factor, but forcing them to immediately give a blank white picture is a problem. I like both the Raspberry Pi option for monitors and lightbox option for non-monitor light sources. Each have their drawbacks so I’ll have to do some tinkering.

It seems like removing the LCD from a monitor while leaving the polariser in place is not feasible (due to glue), so it’s going to be a Raspberry Pi/ Arduino type solution if I go the monitor route.

As for the lightbox, it’s something I’ve looked at in the past but didn’t find something suitable. I’m looking for something on the order of 12x24" that ships to Canada, so if anyone has any suggestions I’d appreciate it. I can get 12" wide polarising film by the foot for about 35$ american, which is pricey but gives me the dimensions I need (also limits the narrow dimension to 12"). I’m looking into having a local Metal Supermarket or similar build as custom sheet metal enclosure for the LED strip route but that’s probably the most costly option.

Keeping this project friendly for non-technical people is going to be a challenge.

Thanks for all the help! I’ll do my best to post options as I make prototypes.

If anyone’s interested in what’s going on in the pictures, the horizontal bands that you can see in the glass under the polariscope are the stress present in un-annealed glass that make it more prone to breakage. 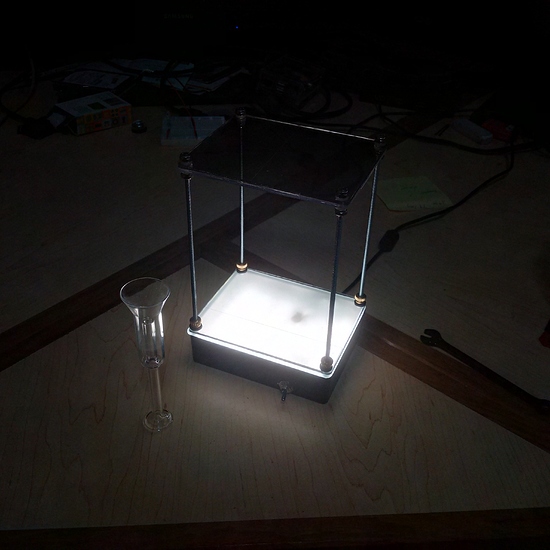 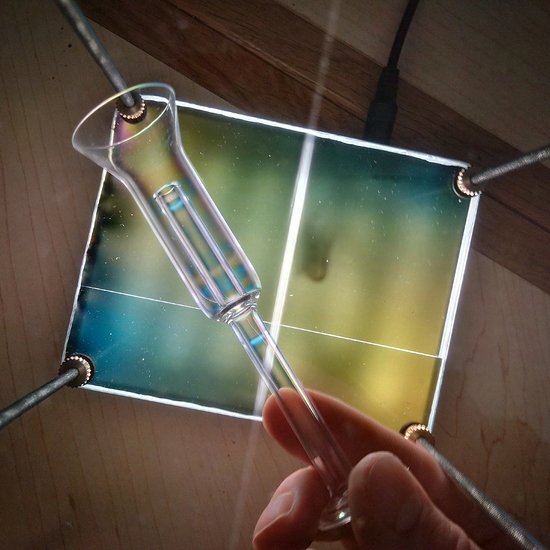