i’m cant decide when i should replace my CPU/Mainboard for my VFIO gaming pc. It also needs to do a junk of handbrake work every now and then.

my current (and probably will not change in the next years) monitors:
two 1440p 144hz monitors

The GPUs basically can be excluded from this discussion, because
i will replace my current ones (host: 480, guest: r9 290x). Probably will replace with Navi if there are no issues with VFIO.

The cpu has to be able to manage two m.2 x4 ssds, a guest GPU and a host GPU.

I kinda want a 16 core part because of handbrake and vfio “cpu splitting”.

I’m thinking not Ryzen 3950x because of PCI-lanes. But i do not know if they will be a problem. That’s probably what i’m here for asking

And if not Ryzen then probably Threadripper now, because there is nothing on the horiZEN (i am so sorry

) for Threadripper Zen2, as far as i know. Or maybe just keep my current one because there wont be a performance boost?

Thank you for your help!

What are you trying to achieve with your upgrade exactly? Is it just Handbrake and vfio? So you just need more cores?

You need 2 gpu 8x and 8x + 2 m.2 and 4 ssds
Mainstream AM4 would work 8x 8x and 1 m.2 directly to cpu witht he ability to add 2 more m.2 off the chipset (with pcie 4.0 bandwidth wont be an issue with pcie 3.0 drives) Could have an issue if you are slamming every storage drive at once full tilt but doubt that would be a common occurrence.

Yes basically handbrake and vfio. So more cores is the thing.
Because in windows games i “only” have a 4/8 Core CPU basically at the moment. Which is fine currently. But might be showing its age in the next year or so, i think.
And last time i started handbrake jobs it had to run for a couple of days, which was kinda annoying.

It’s only two m.2 drives. The m.2 drives are “by 4”. Sorry that was a bit misphrased. But i also could do one m.2 and one sata-ssd. I want the boot time for the win-VM. So linux on sata will be fine.

I think you are correct. 12 cores with 3900x should be more than enough for handbrake. And more than fine for gaming.

I dont have any knowledge there, but the x8 configuration for the GPUs are not presenting a bottle-neck?

GPU based renderers like OctaneRender and Redshift make use of the video cards in a computer to process ray tracing and other calculations in order to create photo-realistic images and videos. The performance of an individual video card, or GPU, is...

“There is a clear, but small, performance difference between the various PCI-Express lane configurations in OctaneBench. Each increase in lane count, from x1 up through x16, marks a little improvement. There is also a difference, again small, between PCI-E 2.0 and 3.0. Overall, the spread from the slowest (PCI-E 2.0 x1) to fastest (PCI-E 3.0 x16) was about 7%.”

Storage is the current pcie device that can actually use more lanes as it is fully saturating the available lanes. We dont have controllers to fully saturate pcie4.0 x4 and 3.0x4 can be saturated but is only high end drives.

Thank you so much for you help!

Primarily due to your IO requirements, you’re kinda shoehorning into Threadripper. The Ryzen 3000 series is supposed to have some additional virtualization improvements as well, so it may be worth waiting for Zen 2 Threadripper if you can hold off.

If you can make due with 2 GPUs and a single M.2 you can use all CPU lanes and thus have no issues with reboots with passthrough. Otherwise, the chipset M.2 will need to basically have a virtual hard drive created on it and is used just for the VM that needs it and not passed through at all

Thank you for your thoughts!

Yes it is just the second m.2 that would make it TR. I cannot think of anything that would be added in the next years which would really drive it over the edge; completely justifying TR.

So assuming vfio tests for ryzen 39xx/x570 will turn out ok, im going with AM4. I can live with just one m.2.
Also next generation TR probably will “really” start at 24 cores. And even just TR with 16 cores will cost more than the 3950x.
So i would be looking at at least 500€ more than AM4. Which is not justifiable for one m.2

And i surely cannot justify more than 16 cores to myself

Addendum:
I looked at some pci-lane pictures for Ryzen3000.
How can i be sure that the m.2 slot and the sata slot (as well as PCI for GPUs) use the correct PCI-lanes?
Is it stated somewhere in the motherboard-manual? Or can i find that out via linux terminal for example?
Just want to know what to watch out for when buying etc.

1 M.2 Will go directly to CPU rest will go through the chipset

I’d say most motherboards are going to use the 1x4 NVMe configuration, but you should be able to verify on the motherboard specifications page if it is using the 1x2 NVMe, 2x SATA config by verifying it’s just a single 1x2 NVMe slot 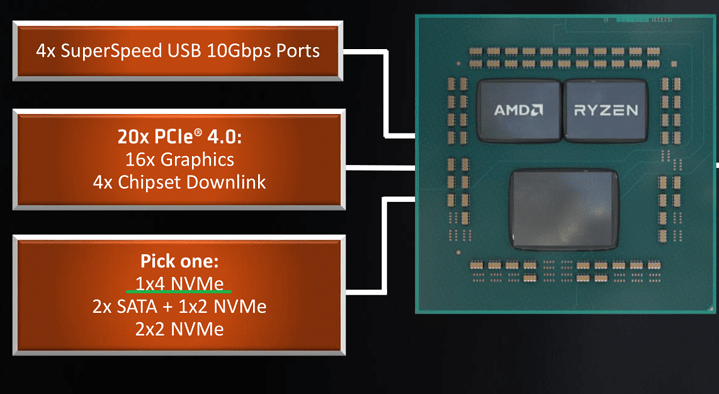 I mean what would they add without hurting EPYC?

I mean what would they add without hurting EPYC?

Epyc has more lanes and multi cpu support. That is targeted toward servers. different market segments. 16 core AM4 lacks pcie lanes hard and once more 4.0 pcie drives are out there will have same issue as AM4 vs TR4 so while there is overlap there are reasons to go up or down just like with TR to Epyc

Also if the base 16 core TR4 cpu is same price as AM4 or close why would I get AM4 except if i dont want to spend a bit more on the mobo.

I think your reaching… I think TR4 doesnt make too much sense at all from AMD’s primary customer base… but this is a topic for another thread… or the lounge.

@Brutkruemel I see no problem with the 16 core but I dont see as much of a benefit if you were to say save money on getting the 12 core… TBCH 4 extra cores is nice… its great Lots of VFIO CPU Splitting but ask yourself… Do you need it? Is it worth the extra money. If you look at the specs… you get 4 extra cores yes but you dont get very much more cache in fact you have less cache per core which on this platform does effect performance

How can i be sure that the m.2 slot and the sata slot (as well as PCI for GPUs) use the correct PCI-lanes?

A really good motherboard allows you to control this

@2bitmarksman that picture helped me understand it. thank you!

@PhaseLockedLoop the cache argument is a very convincing one. And as i only occasionally do video encoding, doubling my current core count will be enough of an upgrade

Thank you all very much for your thoughts @mutation666, @2bitmarksman, @PhaseLockedLoop
You convinced me to go with AM4. Which i really didn’t think would happen. And saved me a lot of money on the way

To anyone curious, looks like the B550 and A520 chipsets are confirmed to once again made by ASMedia, so it will suffer the same Hardware ACS issues where everything past the chipset is lumped into a single IOMMU group.

X570 chipset is made by AMD, so let’s hope the IOMMU group situation is solved.

I really hope the IOMMU groupings get fixed on x570. It is the only thing that could convince me to get an x570 board over my x470 taichi ultimate