So I have had my Scarlett 2i2 for some time now. I have had this problem since I have had it, and has persisted through both of my desktop computers.

The issue is that the sound will randomly cut out and the only way to recover sound is to replug the usb connector or restart the machine.

It seems to happen at a high rate if I am installing a program or doing something such as a windows update. I also noticed that it can happen from using my usb webcam while having the audio on could case my sound to cut out. I don't know much about the usb hub but I was wondering if it possible got overloaded or something.

While I mostly have just began to deal with this problem by replugging it as it doesn't happen to often a permanent solution would be amazing.

From my own research I have tried every usb driver that focus rite advises, as well as drives that fixed peoples related problems in amazon reviews.

I have looked into changing the usb cable, different usb ports, and in the process of upgrading my computer a new motherboard.

I have also reset my bios to stock, clock speed stock, but nothing seems to have changed.

I've used this device for probably about a year now, while I didn't speed everyday trying to fix it I've look around for solutions myself off and on. I figured I'd actually ask somewhere. Any incite on why I could have this problem would be greatly appreciated. 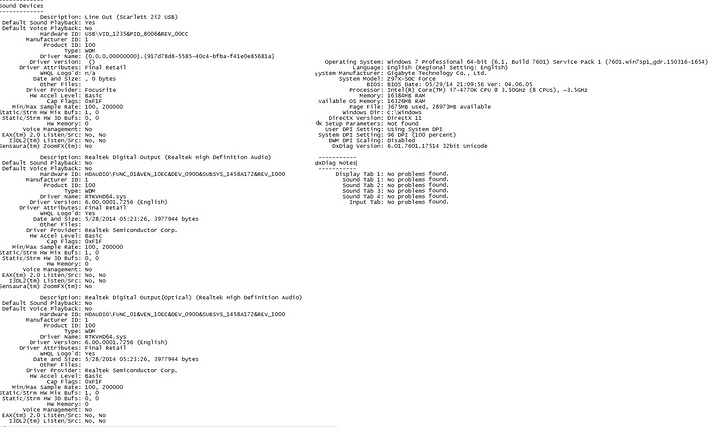 Not that i have a solution, but i have had cut out's (and one death) with 2 different audio interfaces, 2 scarletts and a line 6. Basically once I had the scarlett stable (as in drivers) it fried lights but no sound, and after recording about 1 minute with the line 6 I gave up because of the cut outs. I have been using my cell phone with a headphone and mic splitter cable and my mod mic to record any of my usually noodling's lately, sounds fine to my ear and I don't have to mess with delay or drivers.

On the off chance this helps, i had my high impedance headphones (250ohm beyerdynamics) run into both the i2/i4 and the line 6 as monitors and or outputs, could have easily been overloading/overdrawing amps from the usb ports and interfaces.