hi everyone my current pc was bought for me 9 and half a years ago and some of the stuff in it is 5 years older than that. It lost the ability to play games about 5 or 6 years ago, partly due to its age and the fact that i didnt really understand what anti virus was till about 4 years in.

I have owned playstation consoles all my life but decided it was time for an upgrade. So a couple of months ago i sold my ps4, i had planed on adding the money to what i had already saved and then buying a pc, but a couple of weeks ago after doing research i realised none of the pre built pc's had was i was looking for.

So knowing next to nothing about pc hardware, (i had previously thought a graphics card was some sort of tiny micro chip, the same with RAM) from about 8 oclock one night till about 6 in the morning i learded everything i could about computer hardware, it felt like a whole new world had opened up to me and i decided i would build my own pc.

this is the build minus the case
http://uk.pcpartpicker.com/p/rmD3kL

this is the case i would like to use 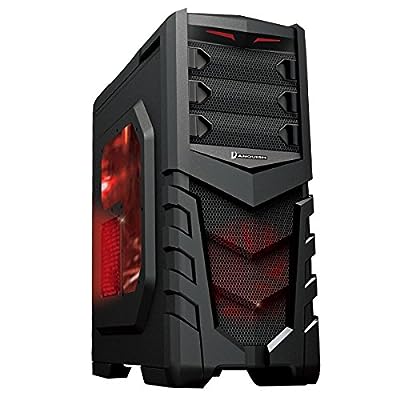 The CiT Vanquish is the latest case to join the popular Vantage series of cases. The Vanquish comes with a wealth of attractive features such as USB3 & Card Reader Connectivity, Acrylic side window, T ...

but i have no idea if its compatable or not, if not can someone recomend a case under £40

Looks like a pretty sound build to me. The case should be fine, the restricting factors are usually length of graphics card (you look OK here) and ventilation, which again looks to be good on the case.

If you can stretch to it I would recommend a better CPU cooler as I have always found the stock AMD ones rather loud when the CPU is fully utilised. Something like the Hyper 212 is a good budget cooler that isn't too loud.

Yeah. Case is fine, everything else is pretty much fine. I would recommend an aftermarket heatsink though, for that CPU. There are plenty of dirt cheap, high performing ones to choose from.

Also. I would get something else besides the Corsair CX psu. Get something with a bit more quality. A Seasonic G series would suit you very well.

Edit: I went ahead and edited your list. I deleted the Windows 8.1 because it's far too expensive. DigitalJuice, here on the forums, is selling legit copies of Windows for $25 USD. Buy a copy of Windows 8.1 from him.

I'd recommend going with the build @Jason_Thongphetmanic just suggested, but maybe going for 8GB instead of 16GB of RAM (unless there's a specific reason you need that much), and using the money saved from that on a better GPU and/or a HDD (unless you're taking out the one from your old PC) for mass storage (250GB won't be enough for OS, games and media files - unless you're maybe using the machine for just gaming, not recording gameplay/storing films or the like).
Something like this:
http://uk.pcpartpicker.com/p/VDBbf7

Jeez louis, that's loud. That's more noise than my whole PC. And I have 12 fans in mine. lol

but maybe going for 8GB instead of 16GB of RAM

Agreed on this too. If you absolutely need it, then fine. But I have 16GB of ram in my PC, and i hardly ever use more than 6GB of it.

thank you to everyone who has helped, im buying the vantage case and the hyper 212 fan, ill have the rest of the money i need in about a week, looking forward to having a decent pc, and playing all the old rts games i missed out on because my computer was a pice of crap.

I'd go with this. It's a little bit more expensive, but it will do much better. And if you're getting that CPU, make sure to overclock it. Or it will be money wasted. If you have a drive already then you wont need the one I put on the parts list. As far as Windows goes, you can get it for much cheaper around here. You don't really need the Writer either.