So in a few days here I'll be selling my R9 Fury and secondary/steam library SSD cause atm I could use the money and could go without the distraction of games... I also decided I would need something to kill time besides my college course work however. Which is why I intend to start the one year Linux challenge.

Now I'll be dual booting windows just incase because my classes are mostly online... But I intend to have Linux as my primary OS. If this is cheating than I won't officially enter the challenge of course.

Now this isn't exactly my first time using Linux... about 10 years ago in middle school I bought a dumpster Windows XP system at a garage sale for $10 and threw Ubuntu on it just for the hell of it... But that was a looong time ago. Oh yeah last year when they were giving win10 away for free and it shit the bed I tried to configure arch from scratch for about 4 days before returning to win7.

So any recommendations? I'm thinking Gnome3 cause It's supposed to be simple enough. But I am doing this to actually learn something. So what would you guys reccomend I start with... and what would be a good Linux based skill to start learning? Thanks for any feedback and take it easy!

The 1 year Linux challenge is vs. yourself not other people. The intent is to encourage new people to stick with it and find solutions instead of giving in to comfort and confirmity. I would have stayed in my windows 7 hole away from the bash terminal if I didn't take the challenge. And I'm very happy I stuck with it.
Linux 10 years ago is != To Linux today.

I prefer Ubuntu Gnome 16.10 for my dd. Fedora works incredibly well. And I'd like to give Antergos a try eventually.

Yep, I do plan on using Linux as my dd for the next year and I understand it's a personal challenge just didn't know if having win10 on the side incase of school was breaking any rules.

Glad to here 16.10 is working out for you as I understand it's the latest stable release. I suppose I might just start with that.

I would just like to say what you might have figured out yourself, stick to something with good documentation. So, the "grandfather" distributions or the popular ones, like Ubuntu or its derivatives. However, Fedora would also be a good option, especially because you'd like Gnome3, which is its default DE. Some would argue it does not matter which DE you put on top of your OS, the experience is the same. I'd argue it is not so, the implementation and the little bits and pieces that are changed a bit and adapted to the system underneath is better supported on a main DE of a distribution, than on a community supported one like Ubuntu Gnome.

It's got great documentation and a lot of people on the forum run it. So if you have a problem you could get help. Of course even if you do choose a different distro, the community is still here to help.

I did the same thing and ended but having Linux on my machine and MacBook. also, im doing the LPIC-1 because if fucking. love. Linux. and the gnu stuff.

I would say fedora by the mile. it doesn't look so user-friendly and artsy and designerish BUT when you are 6 months into Linux and you realize what the hell canonical is doing and/or is trying you feel kinda betrayed. I felt that way.

fedora is very nice, works well, doesn't look like much BUT because it's from red hat it has some speciality and works different than other distros and you have to "unlock" some reports, its will serve very well and very long.

if you want to actually learn how to operate gnu/Linux install all the stuff you need to enjoy media: browser, music player, vlc player etc and use it for EVERYTHING. also: learn vim. ask Wendell, but he will tell you vim. next thing you do: take a very hot bath, smoke or drink a little and say following mantra for 1 hour: "EVERYTHING IS A FILE" after you realize that everything is a file and you can work vim open a terminal and your browser, get a command line cheat sheet and get crazy

you can do everything.

but srsly: learn how to work with the terminal and the shell. write some easy scripts, make some aliases. read the man pages.

ask the community. that's what we do: do stuff we think we know but in the end, we google and after that ask in the forums.

Another beginner here had cited that they didn't like the lack of configurability of Unity (The Desktop Environment, or "User Interface" if you will) on Ubuntu so I suggest that before you dive in, run a few flavors of Ubuntu on a virtual machine and use it for a day before going full-throttle.

Again, try them all out. See which one you like best and then move on from there. I personally use GNOME for my Desktop and KDE for my Laptop (Simply because GNOME 3 gets inconvenient to use with a trackpad IMO).

I'm gonna suggest Linux mint 18.*. Rebind the shortcuts, so windowsbutton+m shows the desktop and ctrl-alt-delete looks the computer.
Also change the setting that let you be able to change names on files and folders by just double clicking the name.. Gonna feel a little bit more(I want to say 'like home' but I dont think it's appropriate xD) what you're used to.

Have a look at Netrunner 17 as well as KDE-Neon. I would stay away from mint (even though people will shill for it) because its rather outdated. Netrunner and Neon try to keep up with systems like Arch and I think Neon is at least on the 4.9 kernel.

If nothing else grab ubuntu mate and roll that. It keeps stable pretty well if you don't fuck with it too much.

or you go with fedora 25 straight with gnome. for a "first time" user i think it has the best balance between stuff that works and will continue shipping and a rather well build distro.

or you could go oldschool debian but also: gnome. dont punish yourself.

all those suggesting Fedora to new users without explaining that Fedora proper requires you to fiddle with codecs out of the box, are possibly sending people down a rabbit hole.

instead, Korora is Fedora without all the extra hassle, so that's what i recommend.

Fedora is also Aspergers OS. I just don't point people at it because of that LOL.

i use fedora for a couple of months now and i cant recall to have to fiddle with codecs. or i just installed them and forgot about it, could be the case.

but then again: isnt that a good thing for a beginner to go straight where the action is? 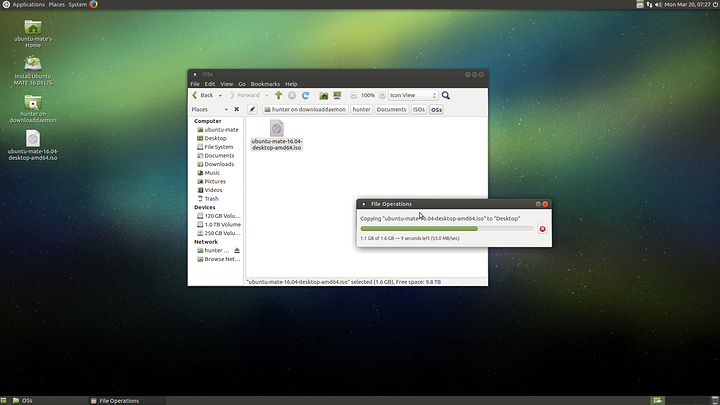 Ewww, Korora. Though it includes the additional codecs, Korora is just bloatware. It's not really that hard to add the repos and codecs tbh. But if the reason to stray from Fedora is this, then the user should probably just stay awake from fedora in general.

then the user should probably just stay awake from fedora in general.

If anyone was going to get into workstation loads or radio, Fedora has everything you need equipped. I don't generally like the users though; they get stuck to one topic for months.... At least the ones I have met. Really annoying.

what do you mean Aspergers?

Go watch the linux sucks videos and wait for the idiot in the background to start yelling about fedora then you'll get what I mean.

Aspergers at a Linux conference? Surely you're joking.