As far as temps, highest i hit was 77c, but i think the fan was barely on. In actual games, i am getting 64c. Is that normal, or slightly better?

As far as idle temps, i am getting 33c-35c, which i have confirmed via Precision X, HWmonitor, and GPUZ. And i think that is pretty good, considering it is 106 where i live at the moment T_T (getting home, the sun was hitting my face like a furnace).

I messed around with the fan curves... not sure they stuck. i clicked ok and apply, but when i clicked the fan curve again in Precision X, it was back to the stock fan curve.

I am brand new to all this GPU stuff, as this is my first. i plan on overclocking (probably not right now, as it is 100+ degrees all this week, and i am not playing anything super demanding at the moment), so any help/suggestions would be appreciated. 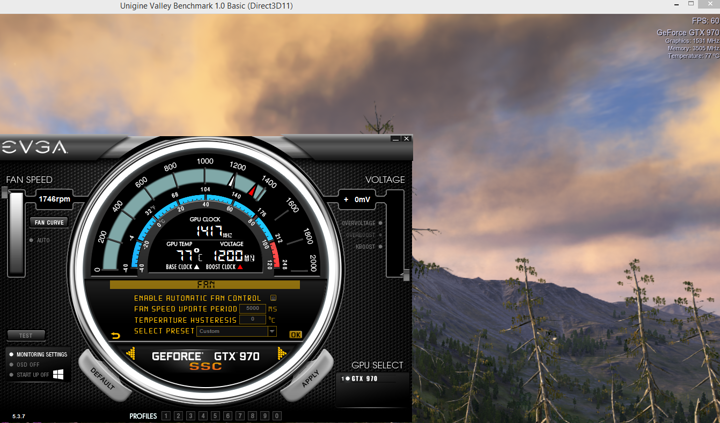 Your base clock is exactly that, the base. When under load the GPU will boost it's clock speed provided thermal limits allow it. 64° during normal gaming is great, and even 77° is well below the thermal limit. Most reference designs run in the 80s, but you don't need to worry about that. If you try OC'ing, I'd probably try to keep it under 85°C.

You have a SOLID 970 with those clocks.

PS: I feel your pain with the 106 degree temps. I'm moving to Antarctica, I hear it's nice this time of year.

@Swiftness90 No, i get what a base clock is, i just thought that the max boost on this card would be what was provided (which EVGA says is 1,342). i was not aware that it could go above that.

@akh270 I had a feeling i was lucky.... with my new fan curve (probably needs improvement) the card now gets 63c at load. I could bring it down, for more noise, obviously. And antarctica is cool (pun XD) untill it melts ;)

It has happened on my 2 x 970s and now my 980 Ti. Valley appears to be too high so I've always ignored it and relied on Afterburner monitoring.

Yeah ignore valley it thinks my 980 ti is 1700. As for the boost clock it can go as high as temps allow the boost clock in specs is basically them loosely saying your card will at least boost to this.

Hmmmm, it seems i got a decent little card then :)
I'll definitely be overclocking soon, and i bet i can get to 1500. With my new fan curve, i'm getting 1430 at 63c. I also ticked the frame limiter and set it for 60fps. any drawbacks to this? Seems like it just keeps your card cool but not letting it push games over 60fps.