So I've not had the money in the last while to build a new system, and this is technically not all new.

I got a new PSU, a 1050Ti, and a couple of SSDs which I've been running in an old AMD 7700 APU I system I picked up a little while ago. I've finally managed to get the next portion of the upgrade. My R5 1600, a Gigabyte Gaming 3 and 16GB of Corsair 3200 RAM (Notice people around here bagging on corsairs prices, it was the cheapest option available so yeah.....) 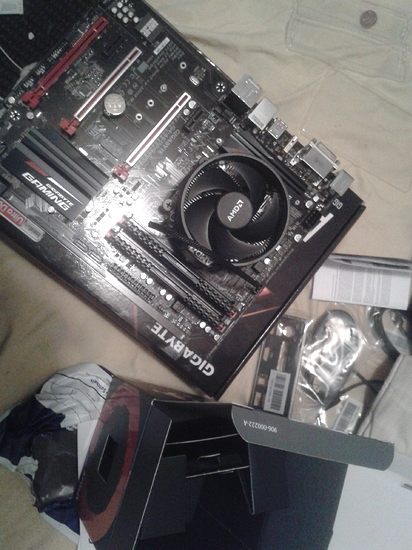 Just got the CPU and ram installed and thought I'd post before cannibalising the rest.
Hopefully will post soon with the system booted and roaring..... Oh I hope I didn't just jinx myself

edit: Yes that is my bed, I have done much study and found it to be the safest place to build computers, the socked feet on carpet are also present.

Yes that is my bed, I have done much study and found it to be the safest place to build computers, the socked feet on carpet are also present.

As opposed to all of us that have super advanced anti static laboratories where we build our machines....

We're a community of sock on carpet builders , you won't find a lot of people here concerned about your build location.

That being said if this is a blog shouldn't it be in the blog section?

Nice build.
Respectfully I think new cpu/mb does make it a new build as opposed to a new gpu etc IMHO. Curious if you have an OEM license or full license (assuming windows) and if M$ gives you any grief.

You should see my working environment, it is allot worse

I feel if I had a chance to read this I might have done some reading. Installing Win7 wont recognise USB on the chipset lol fucking microsoft, knew there must have been a reason why last minute I thought about grabbing a licence for Win10.

I have also been getting weird boot loops updated to the newest beta drivers for the BIOS so am going to revert back to the last stable one.

Off to make a Linux boot USB now...

Was just going to be a before and after. Hopefully there shouldn't too much inbetweening....

Yeah, those modern chipsets just won't install Win7 without a whole lot of jumping through hoops.

Also I agree with trucker, new CPU and MoBo = new build. In fact it's only the CPU that matters to me, as that is the brain of the PC.

Well I did also buy the other parts over the last 8 months with the intention of them moving to a new system. Last time I had a gpu this new it had 1/8th of the memory.

edit: I just installed Mint, the longest part of the process was setting up the usb, probably in part due to the limitations of USB2.0..... 29m

Yes that is my bed, I have done much study and found it to be the safest place to build computers, the socked feet on carpet are also present.

I too like to like to live dangerously. There's no better place to build, as it's the most open space I have available. I forgo the socks though.

I was too lazy to move it out into the lounge and be in the way of the people I live with, not that they would have actually cared. In hindsight I wish I had, an over zealous friend helped pull the old system out, which included removing the watercooler (Which I'm plesantly surprised looks like it should fit).

The system I needed to set up the Linux Boot USB......

Wait that's not a thing on Linux...