Hi ! I have just got a few PowerColor Devil 13 Dual Core Radeon R9 390 DirectX 12 AXR9 390 II 16GBD5 16GB (8GB x 2) to replace other AMD/ATI setups among them 2 with 7990 non reference.
Most of my experience is with preceding AMD models, most in double gpu boards.
Does anyone have any experience with these, and recommendations.
Also I wonder if these are among the last of the double gpu non-reference boards we are going to see ?????
Opinions and recommendations are welcome; not in choice selection, the choice is made.
Specs, opinions, experiences, best monitor with, a future 4k monster, 2 of the cards totaling 4 gpu s,
the mining possibilities..............

1) get water loop if you have 2 of those or more running in same box. (temps on air are bad especially if you have 1 slot space between)

again you are limited by your temps.

Not at all; I am an old tech; at the time I had other techs tink I was nuts for putting fans all over.......electronics does not like heat ! PERIOD.
My main use is Scenery tourism; I like beautiful graphics, and some games are extraordinary. I am trying to get a pulse, since there does not seem to be many of these out there. Although, as all ATI, the graphics are rich and full. I am using a few Korean 4K s 40 s the AMH, first generation (1 x 399 and 2 x 409 v 1.0). I think it is one of the best combinations I had yet!
I read the sweet spot is trifire, one of my favorites by far. It seems that the drivers like 3 gpu s, do not know why, but definitely great performance. Presently my main is still with a non ref 7990 with a vortex 7970; it kicks ass, and as all ATI has a few games it does not like.............but that is the way the world turns. (lol)

Currently i'm running single FuryX
(and its much better than running on air... noise? nope..., temps? nope -- its is surreal, sound of silence)

The Ares III is still the dual GPU board of my dreams. Glory to the brave! I had similar issues while using RIVE+4960x and r9 295x2 plus 290x with 1500 watt psu. 295x2 worked fine on its own but after adding 290x hell got loose. I thought i had heat issues but in the end I changed the setup to sli and problems disappeared and other problems showed up. Also worth to note that 3960x doesnt support pcie 3.0 officially. ( i have no clue if it could cause issues ).Actually i had quite a few issues with this board and / or my cpu. It seemed solid,could run benchmarks for hours, memtests for 36 hours etc. But when using something like ram disk or ram caching for ssds it would throw bluescreen on certified ram/ with certified xmp speeds. Disabling power saving features and c states helped me a lot with stability.Silly question, did you connect molex to bottom connector on mobo (next to tpm header)?

OUT OF MEMORY , YES ALL OF THEM, BUT FOR SOME REASON, i DO NOT REMEMBER THAT ONE ???

ups , i made a mistage, i thought of rampage black ;/ sorry

Welcome to the Rampage IV Black Edition Owner's Club! (Everything is subject to change without...

then again cpu bottleneck... to feed work fast enough to your gpu's ... sometimes you need to oc that ass quite high... or your system will limp... but with multi-gpu setups the fight is always against temperature and noise...

Ran 750W gold 80+ psu's in past, but recently running on plat ranked psu from 850W enermax. (a good psu can easily take 4 290x's and feed well enough past its specs (- i've found my 850W doing 1100W on socket on full system load) though i'm not pushing is like that anymore... temps are beyond my wallet and cooling capabilities.
Funny by default i try to get my cpu's at 4.2GHz and keep them there.
*( i did psu hacks before, by using 2 psu's - and inserting other's psu's pins into main mobo molex pins) was long time ago... but its nice trick.
Something like that but more redneck ;)

Some people experience problems with multi-gpu setups due to exhausting their address space... (who said its 64bit everywhere right intel?) Its limitation inherit on some cpu's and motherboards (mobo's do cheat a lot, and do a lot of hacks -- usually they make more issues than solve -- especially in expensive mobo's that's mainly why LGA2011 is much better choice though it still takes a lot to research -- overall less bullshit on mobo the better it is.)

You have just mentioned a fact I have been suspecting for a long time ! The memory re partition and usage, and clean-up after, is quite deficient ! (IMO) or nor efficient enough.
To the fact, why do certain combinations work beautifully while others do not. I have been crossfiring for the last 10 years (or dammed close), and always found a sweet spot with incredible graphics.
Double PSU, when scoped, you will realize it is not very safe, the PSU would have to be perfectly identical so that all the crap (ripple.....) would not be a deterrent!
I have not given my last word, far from it; but like with tobacco (no my case ) I will need precision help from the tech community (to me Teksyndicate).
I have to figure if the 3 gpu, considering the 390 II are not X, must be 390 s or can I have a 3dr being a 390X.
edit 1 = yes I do heat with these occasionally.....
My father was tech director for 3 radio and 1 TV station...............fans and heat are commonalities!

Your GPU's can vary in CF. X and non X makes no difference.
(in sli they cannot, sometimes they even have to be from the same company - but sometimes adjusting/syncing clocks work swell)

in fact post your gpu-z ss from your dual 390 you may be able to unlock them if they are 390 (non-x) chips. (though i think they are full hawaii)

about psu's, highly depends what you are running -- if they are cheap bronze or silver then yea... but most proper gold and plat won't have such issues.

yes some models can be unlocked. 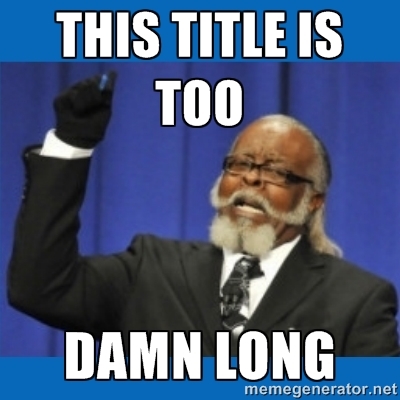 those things are beast.

here, sorry for delay, got to get it working ! 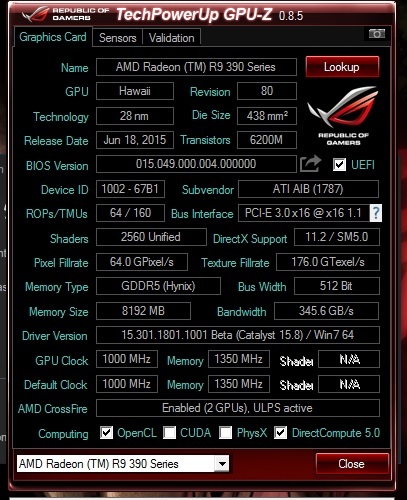 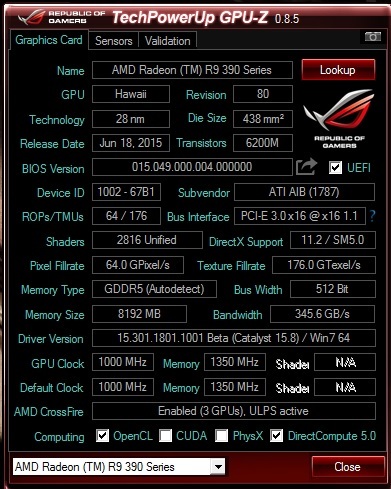 edit 2 = after a lot of analysis of the PSU, the rails or no rails. I opted for a 1 rail 105 amps 1300 watts egva f2; and it seems to to the job nicely; however I am keeping a very close watch on the rigs first steps. (so far so extra good)
edit 3 = a lot of fussing around to get the system stable and kicking; it is not an easy card to install.
edit 4 = YOU MUST KEEP IN MIND TO FEED EXACTLY THE SAME POWER TO ALL 4 CONNECTORS, NO SHARING (on a multi rail); on a single rail, try not to burn the wires.

THIS IS WHY SOME PEOPLE HAD PROBLEMS, UNEVEN POWER INPUT = A CARD KILLER !

that on ss on left, it may be possible to unlock it.

check this thread out

Activation of cores in Hawaii, Tonga and Fiji (unlo...

CUINFO v1.6 compute unit configuration reader DISCLAIMER THIS SOFTWARE IS PROVIDED "AS IS"...

unlocking it your gpu enabled more shaders and TMU's. Just like you have on your picture on right.

i was running quad-fire 290x before, yes its nice.