My family is going to be remodel our home and im going to try to convince them to run in wall networking. Im just wondering what would be better for speed and future resistance, Fiber or ethernet.

Unless you need to run cable more than 100m stick with regular copper network cable. Fiber is expensive (the transceivers, switches and termination and such, not the cable) and doesn't offer any advantage other than distance over coper in a home environment. If you use cat6a or cat7 cable that will be fine for 10gb if that ever becomes standard.

ok thanks networking is not something im familiar with.

Yeah for in home I agree with @Dexter_Kane just make sure your cable is shielded twisted pair. That will help with signal loss or any interference.

I am not to familiar with your local construction practice but I would recommend to have empty tubes run.. eg. from outside to your central networking cabinet.. so in case you ever get fibre to the home you could have it run to your equipment.

Even into rooms you think you'll never need networking, at least put empty tubes into. I like to have them on opposing corners.. so no matter where in the room you’ll reach a outlet if needed.

For the cable I would go for Cat.7 cable as this will allow you to even go to 10Gig/e if ever needed at home. Which I'd consider future proof

the zone is referring to electrical conduit and home running it to a location in the house that you will be the core of the network. it is expensive but when technology changes you can pull the old out and put the new in. 3/4 is the easier size to work with when pulling cable however this is over kill in residential structures. It is a common practice in commercial structures. I worked as a vendor for 15 years installing cabling for many contractors in the past.

Fiber will not suffer any interference from anything running power through the walls, unlike copper. Power lines aren't shielded so this could be a concern.

however this is over kill in residential structures.

Living in a place on this planet, where Houses sill get made out of Bricks and cement and not plywood and cardboard everything that’s already in the walls when you put pain on saves you from labour, dirt, and not doing it because of the WAF.
Believe me.. running cables.. no mater what type in a brick and concrete wall.. its a pain in the ass.
Thus I mentioned it. (e.g. when my parents house was built no one ever believed one could need anything else but power and water in a kitchen ;)

I can say, that Kat6e or Kat7 are shielded so good, that not even running them around a mains power cable causes much distress on the digital signals ^^ But of course, if you do not have to keep away from powercords

You don't need to waste money on shielded cabling, or on fiber.

Run Cat6 or Cat6e and you'll be fine.

Edit: This was a slight necro apparently.

I'll add, though, since this may get necroed again, for a residential and almost all business purposes shielded cabling is not necessary with Cat6+ cabling, and even with cat5 it's unneeded on most occasions.

Run Cat6 or Cat6e and you'll be fine.

All Cat cabling standards you just mentioned involve shielding.. one more than the other ^^

EDIT: haha yeah I smell death.. though I responded as I was mentioned. Good Night little thread, R.I.P.

Category 5 cable is enough for your home. You don't have much interference in such a building unless you live in a barn. But seriously, just think to cable in everyroom because even if you don't want to use it for your use if you ever resell the house later it's gonna be useful. You can also add 2 or 3 phone plugs around the house such as the main bedroom, kitchen counter and living room. You'll only need two pair cables in case one is going to break, you won't need to change all the cable but just the pair.

Make sure your bronze conductor is a ''full'' one and not like it's hair (plenty of mini conductors). It is not easy to fix and most of the time it causes trouble such as scratchy noises on the line or no signal at all. *

(Sorry for my bad spelling english is not my native language).*

If you have anymore questions or don't understand what I said, feel free to ask again. I am a telecom residential technician and I've studied in this domain so I know enough. :)

Edit: Also don't concider fiber wiring in homes. We're not at this point in technology, yet.. It's useful only for big companies with lots of internet needs such as servers and more. Also, it requires equipment that you don't need for your every day use. Fiber wiring is mostly for long distance since it is light signal there's barely no signal loss (infrared) over lenght versus the bronze cables.

Cat6 and Cat6e cable have no shielding in them, they just have a higher transfer frequency, are thicker, and have dividers between each set of twisted pair which further reduces crosstalk.

Well than I get to buy other cat6e cable. Or what do you call the foil or net around the the pairs (all of them, not the individual pairs like in addition on Cat7)?

Ahh, I can see your confusion. Alot of the cat6 patch cables, and I think all of 7, come shielded out the package without any type of specification on it being shielded. That happened to me when I bought like 100 pieces of patch cable a few months ago... they were all shielded. It wasn't anymore expensive so it was just an added benefit.

Cat6e you buy by the spool doesn't come shielded though, unless you buy it specifically like that.

I remember when Krone released the Cat6A spec, it was before they were purchased by ADC.

I think they have a patent on how it's done too. Has to do with how they make the wire sheathes, and the insulating plug they use.

Also, just to clarify, Ethernet is a networking technology, Fiber is a Physical medium. Category 5,6,6e,6a,7 cable != ethernet. It's just most commonly used that way. (and marketing people don't know what they are talking about)

If I were to wire a house, and I wasn't concerned about price, I would run fiber in conduit. Otherwise I would get ADC KRONE Cat6A cable, as I wouldn't need to worry about grounding the cables.

I'm starting to get the impression that Cat6e and Cat6a is very vendor specific. This box in the picture has no grounding and I have a box of both plenum and non-plenum. It's a left over box that we used about 15 of a few months ago to wire in a new area in our facility.

I have some 6 foot cat 6e patch cable that has shielding on it as well to use for a patch panel. 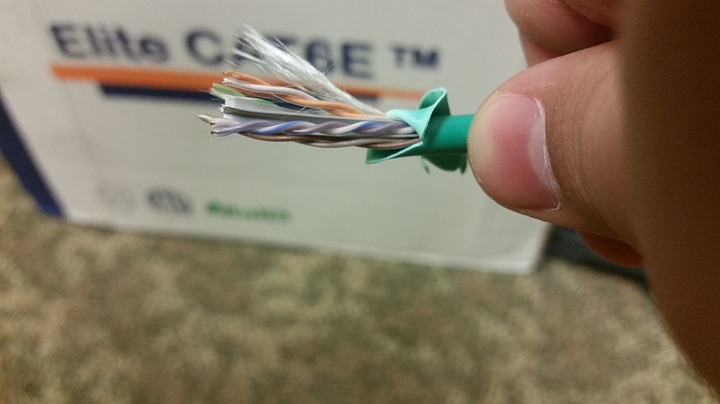 That looks closer to what KRONE cat6a than cat6e.

If you look at a cross section of the cable (or wires) does it look like this:
Wonder if they lost the patent, or if it wasn't patentable.

The idea behind the KRONE cable, is that air is the best insulator, so they reduced the amount of sheathing by making these toothed cable sheathes. (did the same thing for the inner conductor sheathes as well.

If I had my box of cable, I would get a photo for you.

Things people miss when asking "what should i run in my building?"

1) separation requirements on copper, some places require a certain amount of separation to prevent jumping or natural resonance voltage interference on copper cables.

2) level of access, if your walls are completely open you may find that running both copper and fiber next to each other to be more cost effective than risking needing to run a single replacement line generally the recommendation if you have fully open walls is to run 2 copper and at least one fiber strand if practical to each room/desk.

3) alternate uses of the inplace cables, for example copper "ethernet" cable has been "repurposed" on occasion for among other things: phone lines, video lines (HDMI over ethernet), CCTV lines (an implementation of RCA over ethernet)

4) the need for expanded capacity in the future (for example TVs regularly are network attached) when you don't run enough lines for the bandwidth (not connections as a hub on either end can give you more ports) that you may need in the future you might be running into the issue of needing to rip open the wall again.

5) degradation of cable/fiber runs, the cables all have a usable lifespan and will eventually fail take this into consideration when running lines.

6) ease of replacement, it may be easier to run hidden cable ducts in the walls that sit behind an access panel hidden by a photo or other decoration. (I've seen this implemented in a media room with a false cornice attached over the cable duct that was run at the top of the room, this was done to be able to upgrade speaker wire if needed)

as long as you take those 6 things into account as well as capital cost of any installation you should be fine.

myself I would try and run hidden ducts for cable and just run cat 5 as I only run 100mb/s for most of my devices and I would use "standard" length runs ( standard length runs are the ones that come pre terminated from a retailer ) this allows upgradability to higher speed cables as needed. Sadly where I live I can't do this for 2 reasons, reason 1 is that I'm in a rental, Reason 2 is that any permanent cable (that runs inside a wall or is terminated to a wall plate) has to be installed by somebody licenced to do so in Australia (where I live).