Fiber/Fibre and Cat6 running in same conduit - is that OK or a recipe for disaster?

Sorry to double check this, but am I right in thinking that these can both run in the same conduit, because fiber/fibre doesn’t emit an electrical fields Sorry for the simpleness of the question, I’m going to be running the cable soon and would prefer not to have to re-do it!

Yes, no problem at all. Keep in mind that fibre has a different (often larger) minimum bend radius then copper wire. Also, put in service loops (extra length) for both to allow for future troubleshooting etc.

Thank you @Dutch_Master , really good of you. I was aware about the bend radius for fibre, but had forgotten about redundancy…oops! I will make a note to double up if funds permit, thank you

Thanks again for your comments people, @Hako & @Dutch_Master , here’s the rough layout I was planning, should it be of interest of worth commenting on. 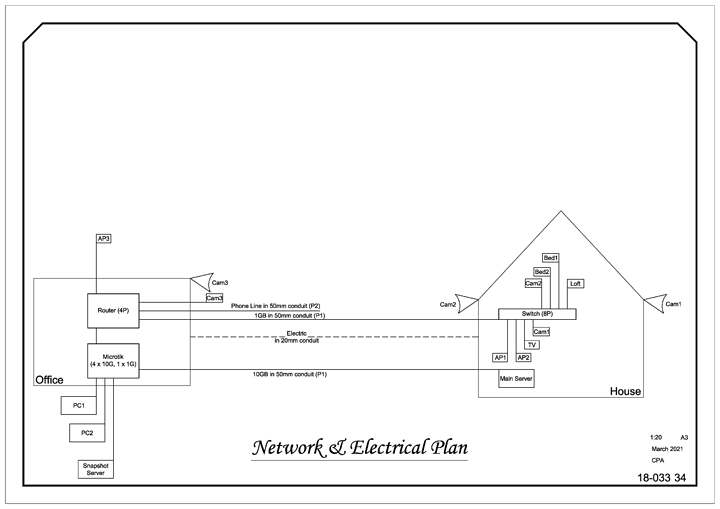 You have a problem. The switch in the house indicates 8 ports, but I count 9 wires leading to it.

So, if you’re changing gear anyway, I’d suggest pulling a 2nd 10Gb fibre cable (in the electrics conduit*) between the Microtik and the new 16 port switch in the house. Hook the main server to that same switch and repurpose that snapshot server in the office as a full backup server. Better yet, make both servers replicate each other.

*this may be frowned upon, but it’s perfectly safe. This creates a redundant connection between office and house and with link aggregation over both fibres you have a potent backbone for your setup.

Good eye! I would like to say that was a test, but it wasn’t! I guess if net is needed in the loft (low probability), I can yank one of the cameras out temporarily.

This is a new install, though consists of some bits I already have - the 8 port switch in the house is handy, as I didn’t pay for it and it has PoE

I really like your idea, but it would mean buying another 10G switch, and I was reluctant to get the first one!

I will partly adopt your idea though, and (funds permitted) install a second fibre cable just in case - and then, again if funds permit, buy a new switch for the house.

None of the cameras are bought and so far I only have one access point, with a view to buying more as and when.

Oh, and the snapshot server is sort of a backup server - TrueNAS on the main server will send it occasional snapshots, that’s what I meant with that description

So nothing other than snapshots, go on the snap shot server - it’s kind of weird when you think the closest NAS to the workstations won’t be used, but my aim is to keep computer noise down to a minimum, so the snapshot server will only be on during the night.

I have dreams of a rack being in an insulated shed that’s attached to the office, but I’m not sure if that’s going to happen…we’ll see!

Thank you again for your input @Dutch_Master , and hope Covid isn’t too much of a bother over there

Oh poo. I’ve just realised that the snapshot server has IPMI and I’d quite like to use that

Also, other machines might eventually have it too, so that might mean another switch in both the office and house…hmm. I guess the office router doesn’t have PoE, so I could get a small PoE Switch as I’d need one for the camera (not bought yet) anyway.

My God, why didn’t I think of that… that’s a rhetorical question

I have no personal experience with these guys, but I frequently see positive stories about them (including LTT!) Some expensive stuff in there, but some other interesting things are pretty cheap: 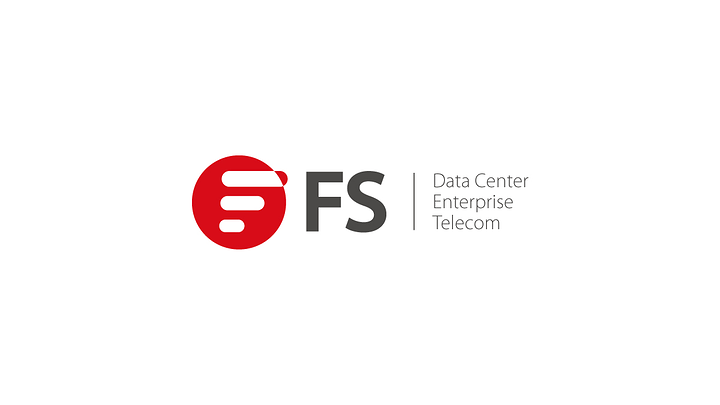 FS is a new brand in Data Center, Enterprise, Telecom Solutions. We make it easy and cost-effective for IT professionals to enable their business solutions.

Thank you very much again, I’ll certainly check them out.

Forego the 1GB connections between office and the house, connect the 10Gb wire to the new 16p switch, add a fibre cable (10Gb) to the electrics conduit and connect it as a redundancy link between the Mikrotik and the new house switch. If you do link-aggregation with both fibres, you have a potent 20Gb link between the office and house, which is plenty for any 1Gb traffic you’d wanna send over that 1Gb link I told you to skip.

The idea is that you have 2 almost separate networks in the house and office, but they’re linked via this “massive” pipe (the 10 or 20 Gb fibre link) so it’s still a single network. And by diverting one link to a separate conduit, you* can (accidentally) dig though one and still have the rest working, be it at reduced speeds on heavy loads.

You could have 40G / 100G / 400G with that same fibre (pair for each direction) one day, more if you get cwdm optics and muxes… 10G is enough probably for just a couple of PCs and a server these days.

Maybe get another CRS305 on the right (since your main server is there chances are you’ll have more gear 2.5G/5G/10G over there as well), and hook your router to your CRS305 on the left directly, as well as to the 8P poe switch.

How does phone line connect to a router? Why do you run phone lines?

It can’t hurt to run a cat6 cable along the trunking at the same time as the fibre links, even if he does not activate it / use it, he might find a use for it later, or might want a separate dedicated network down the line?

Fair point, but I was thinking VLAN for such event. The switches should be able to handle that if they can handle link-aggregation. (requires managed switches on both sides, I’m assuming the Mikrotik already has that feature)

I figure, run the cable, but leave it unplugged, because switches can be proper bastards an choose whatever the heck link they want, even if it is a crusty old 1g connection…

Remember to keep potential differences in mind when running cat6 between different buildings. Depending on how your power is wired (and local electrical codes too… probably) you probably want galvanic insulation to avoid possible issues.

Also, surge arrestors on both ends might be needed, depending on how you do the run and how much you care about your equipment.

But really, if it’s possible at all just don’t. Do all fiber, none of the headaches, and you’re by default immune to all the possible problems you get with copper between buildings, and it’s cheap enough. 1gbit media converters are dirt-cheap, <$50 a piece, and it’s easy to find cheap 1gbit-capable preterminated lengths of fiber.