And not really everywhere - but all of the major switch locations…
Back story - we have been neglecting our infrastructure for years. We added switch after switch were we needed it and jump after jump after jump. Well - I was given the the green light to update our infrastructure… At first I bought a bunch of multi mode fiber that was pre terminated. I thought we could pull a bunch of 10G runs throughout the plant. The maintenance department was a little Leary of that. Scared of fiber being too fragile.
So - I called around to a few of the local telecom companies that do this sort of thing. (running fiber) Well… After the quote (30k) I came up with my own qoute for the company…
Splicer - 1K
Bulk fiber 1.5k
Test equipment 2k
odds and ends… 1k

This is not including new switchs and sfp modules - we would have needed them anyway.

So for under 6k - we could do it ourselves…

The one thing that the telecom company opened our eyes to was running single mode fiber… That way - we can upgrade the speed in the future without having to change the fiber. That was an awesome bit of info.

anyway - we have about 5 fiber runs setup - used up a 50 pack of heatshrink fiber splices - so far so good. It isn’t as scary as we thought it would be. (suprisingly easy)

Results have been amazing so far… 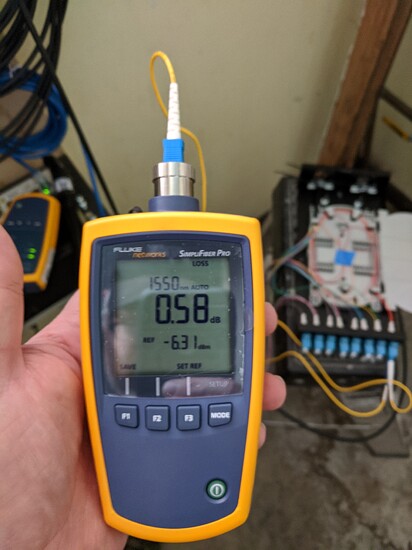 Hardware - we have been using mikrotik switches and ubiqity single mode 10gb sfp+ modules. So far so good. 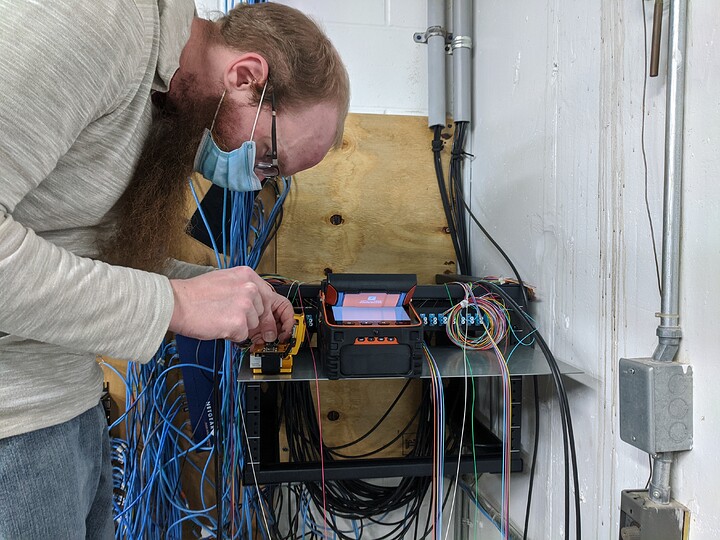 Nice, isn’t that the same Fluke device that Linus used in a recent video when they updated their LAN too.

Bought that one used off ebay. So far so good. (both mm and sm light sources…)

It was mentioned that you can get feedback from the device showing if you munged the fiber cut by any loss detected.

Hey Sam how many meters of bulk fiber did you manage to source for $1.5K usd?

I’m not sure if this is still relevant or if it’s relevant to your situation but do a bit of research on attenuators to preserve/extend the life of your SFP optics. Single mode shines bright and is expected to lose some of that over the long distance it’s designed for.

Doing your own fiber is great! A few tips. If you are not running fiber through hard conduit make sure to run TAC single mode OCC D012CSLS Single Mode 12-Channel 900u Tight Buffer Tactical Fiber Optic Cable - Per Foot

However many strands you think you need, double it. Think you need 6, run 12, fiber is cheap next to labor in the long run.

If you are self terminating and cleaving or scoring make sure to have a safe and secure place to put left over fiber. You do not want to get any small strands in your body as they can really mess you up. The cheapest method is making a loop of tape, sticky side out. As you cleave or score and break bits of fiber off, place them on the tape and then dispose of the tape when done.

If you are self polishing, dont over polish. Lots of people think they need to use more pressure, and polish longer when in reality that tends to reduce the factory flatness of the connectors. 6-8 figure 8’s per lapping paper is good, then visually inspect the ends with a microscope before testing.

When pulling fiber, always pull from the strength member (usually some type of kevlar weave) and never the fiber. If you have to make a 90deg turn put in a junction box at the turn, pull to the box and then pull all the slack you need, then pull from the box to the next destination. Dont try to pull around a 90, it might break the fiber, and its hard to pull so it just sucks anyway.

Unless your using LR TX/RX there is nothing to worry about.

Thank you! A lot of this stuff we are doing… This is the fiber we used. so far so good.
https://www.cablewholesale.com/products/fiber-optic/singlemode-duplex-9-125/product-10f3-012nh.php

We bought pre-terminated ends and spliced them on the end of our fiber runs in splice boxes. I didn’t want to polish

(the fiber splicer has been working great. We ran 12 strand everywhere for future upgrades. Plus with single mode we can run faster transceivers also. So really - the sky is the limit.

We have lots of extra fiber looped at each end. Just in case. The maitenence department that did the pulling of the cable did a great job. No issues with any of the runs so far.

Have to say I am a little disapointed with mikrotik - their 24 port + 2 sfp+ switches have been great - but we have 2 48 port that seem to have a flaw they have not been able to fix.

We have had to reboot each once so far after ports 1-8 stopped working.

but we have 2 48 port that seem to have a flaw they have not been able to fix.

That sucks.
Looking through that thread, it smells like a hardware issue or how software interacts together with hardware.

What strikes me as odd is that the 24 port version (presumably one less switch chip) works fine.

Edit: Looking at pictures on STH, the two PoE-daughterboards aside.
For the first 8 ports to fail, one of the internal switch chip would have to f*-up. And why would it do that after a random time? I am confused now.

Yah - no one seems to know. Theories are the amount of thought-put triggers it… (but who knows currently)