I’ve got itch that drives me crazy.
Installed Fedora 36, installed ZFS, imported my pool, everything went fine.
Suddenly update to kernel 5.18.5 comes along.
Installed it and it broke ZFS for me.
Nothing bad, I just boot to my other kernel 5.17.14 where everything works fine.

Except I can’t remove newer kernel 5.18.5 from grub menu.
I don’t want my family members to remember which kernel to boot.

How can I remove the damn thing?

I removed kernel-5.18.5 with dnf but it didn’t trigger initramfs and grub menu update.
Updated grub.cfg manually, ran dracut, removed initramfs and other files for version 5.18.5 from /boot and it still persists.

Open for suggestions folks, please help me out.

5.18 broke ZFS linux wide. It sucks because ZFS devs cant keep up with the pace of kernel development.

I would just set you default boot kernel to 5.17.xx so that grub uses it as default until there is a fix

But your USE that kernel at your own RISK. Its not that its dangerous to do but this is the disclaimer I often provide.

Others may know how to build the DKMS for ZFS on fedora to handle 5.18 but seeing as the kernel is still unsupported by the mainstream releases of openZFS I would recommend against it

I had this ZFS-breaking incident once last year when I was running Arch. I just booted older Kernel as you did and waited around a week for new ZFS DKMS to be available and everything was fine again. Can happen on bleeding-edge kernels, although I really encountered it once in ~10 months.

Im literally leaving arch due to breakages revolving around ZFS lately. I dont like having to pause and wait all my updates just because some mismatch but essentially yeah this is an issue when you run ZFS. It might be prudent to only update about once a week on sundays or something.

The breakage has honestly exhausted me.

We all know that bleeding-edge kernel can get dicey with ZFS DKMS. It’s a small open-source project having to keep up with all new kernels, because of the old license/politics thing. I’m using Ubuntu (Kubuntu and PoP) and Debian (Proxmox) releases for my machines and the more conservative release schedule is much more carefree for me. I just want stuff to work.

But other things broke too while I was on Arch/bleeding-edge, ZFS is just a more pressing issue because it holds all your data.

But other things broke too while I was on Arch/bleeding-edge, ZFS is just a more pressing issue because it holds all your data.

Pretty much that yeah. Thankfully its not catastrophic.

We all know that bleeding-edge kernel can get dicey with ZFS DKMS. It’s a small open-source project having to keep up with all new kernels, because of the old license/politics thing.

The biggest problem isnt actually that they arent moving fast enough… its that the kernel this year has been absolutely BLAZING… I mean look how many patches and pushes and new versions have come out in 1 year. Its been a bit faster than normal. Thats awesome and a big ooofff at the same time.

My more specific issue with arch is that its stable as vanilla right but the moment you move even one IOTA from that vanilla config even following arch wiki sanctioned changes… you get yourself into muddy water. Thats not the standard anyone should strive for. Its probably the bulk of the reason why people remain on Fedora/RHEL and Ubuntu/Debian based stuff. Arch is awesome otherwise. Just needs more love and less of a wild wild west mentality. I adore the small incremental changes philosophy but ive lasted about 1 year into it and I find myself just tired of the instability.

Anyways all the OP really needs to do is hold back and wait. but he has other options as we mentioned above.

There is that long term copr available though. Ive been reading around apparently its a very solid kernel and very well built to fedora standards but again its a 3rd party deal that people must install at their own risk 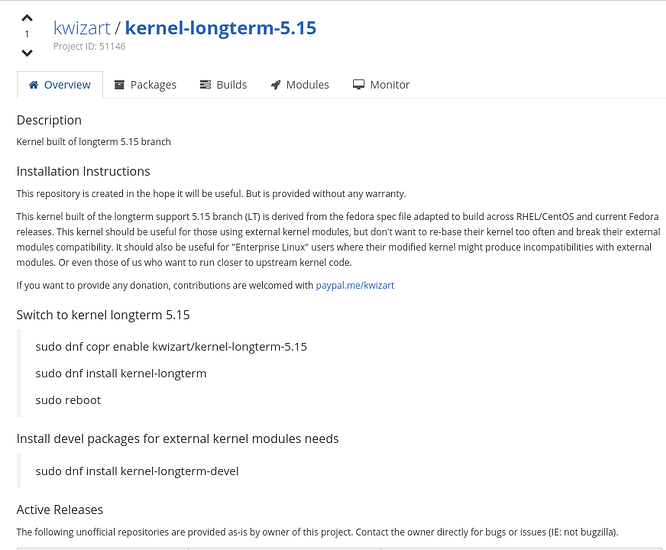 Maybe if you wouldn’t get in over your head, you’d have stability.

You take a bleeding edge approach to your infrastructure, you’re gonna get nicked once in a while.

Thanks for all replies.
I don’t mind waiting.

What I need atm is how to remove newer kernel from grub menu on Fedora?

There’s a config section in there for the latest release. Rip it out and you’re good.

What I need atm is how to remove newer kernel from grub menu on Fedora?

Two ways… above is accurate

You can set the boot order and leave the entries. The boot order will have to be reset at a later date when the fix is in. Your call

To allow udpates except for new kernel, edit /etc/dnf/dnf.conf and append line:

In Fedora file is under /boot/grub2/grub.cfg.

Problem is it didn’t have explicit menuentry for kernel I was looking for.
It was reading from /boot and creating the list on the fly.
I removed all files related to new kernel, but menu entry was still there.
Had to be cached in some file or something.

Using grubby --remove-kernel finally did the trick.
God I love how on Ubuntu apt purge kernel just does it all.

God I love how on Ubuntu apt purge kernel just does it all.

God I love how on Ubuntu apt purge kernel just does it all.

There no purge for DNF

On fedora when in doubt read the docs. They are really god damn good. They really care about their documentation lately.

its almost like a bleeding edge kernel is a bad idea

I just wish Fedora could maintain appstream for LTS kernels, that’s all

I just wish Fedora could maintain appstream for LTS kernels, that’s all

I do too but I already understand why they dont. Think about how many kernels they have to maintain

At any given time they are handling 4 distribution versions of kernel builds and strict packaging standards. Adding LTS to that might be something they dont have the bandwidth to do?

Fedora is about leading edge.

LTS is counter to their mission.