I’m trying to install Fedora in my new Ryzen build. I can get into the live usb but it’s very slow and unusable. I’m very new to this so I have no idea how to start troubleshooting.

It hangs up on this screen for about 5 minutes when booting. 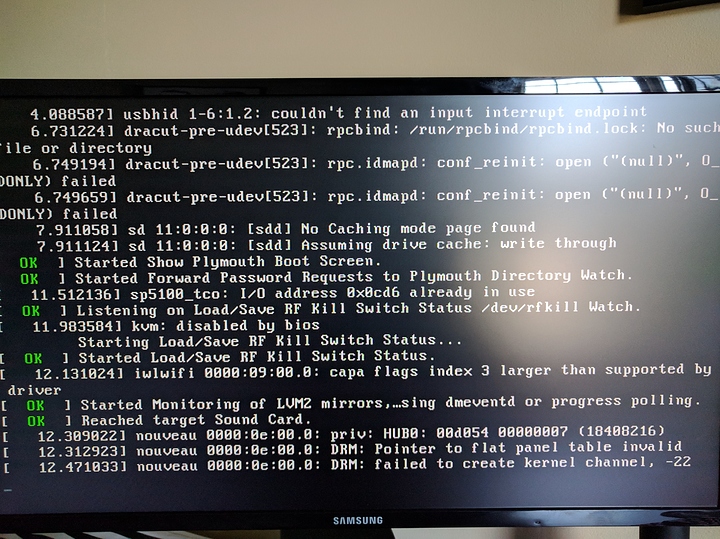 You may have to remove gtx 1070 and get through the install process and install proprietary nvidia drivers then shutdown. Install 1070 and crank it back up.

No need to remove the gpu, at grub, select the kernel and press e, then add ‘nomodeset’ to the end of the line (seperated with space, no quotes) line with
’stuff quiet splash something’
press ctrl-x

Thank you both for the reply. I will give it a try right now.

I got the live USB working by booting into basic graphics mode.

Alright I’m in and it boots fine.

Thanks again. Now for the drivers for the 1070 I’m seeing conflicting info on Google. Do you guys have a recommended guide or am I thinking about this to much and is just as simple as installing the drivers.

Hold on, will write a step by step guide in a few mins, busy.
Meanwhile update everything

Thank you! I will get everything updated.

Actually that link is pretty much the same as what i’ve been doing, but to make life easier, after step

Thank you again. It’s awesome to be part of this community!

Might wanna consider disabling kernel upgrades too whenever you update the system to avoid borked drivers, if you want stability that is. Fedora is cutting edge and proprietary drivers doesn’t go too well hand-in-hand with that.
Afterall, you don’t need to upgrade the kernel everyday anyway.

So everything will update as normal and I would just remove that line to update the kernal?

Yeah every package gets updated normally, leaving the kernel as is. Whenever you upgrade the kernel you should reinstall nvidia

One other question, I’m dual booting windows. I have fredora one ssd and windows on another. Windows is for games and CAD programs.

Anything I need to keep in mind to keep both the working?

Since both are on their respective drives everything’s fine and dandy.
If they were on the same drive, windows might overwrite grub while fixing its boot partition

I might try hardware pass-through at some point but baby steps.

Note that I would HIGHLY recommend against Baz’s advice to freeze kernel updates. Doing this will prevent you from receiving security updates, bug fixes, and improved hardware support. Instead, I would recommend using the negativo17 repo’s nvidia driver packages. This way you will receive automatic updates for the Nvidia driver to support new kernels and it will automatically rebuild using dkms on each kernel update. Worst case scenario if a kernel update happens faster than the nvidia driver can keep up and it fails to load, you can just select an older kernel at your grub prompt.

I will check out your link.