Faulty Temprature Sensor on a HD 6950, What do?

So I got a 2GB 6950 (reference design) off a close friend who replaced it with a GTX 660 he got from CeX because the the temp sensor went haywire and started giving false readings (-199c, like WTF?) causing the fan spinning 100% all the time which results it in being unbearably loud.
He gave me the card after to do as I will, going to donate it to a mate who just got into PC gaming with next to no money to replace his crappy GTX 450 but first I need to sort out the noise.
Oddly enough the card is not throttling at all and is still very much capable of gaming.
Thinking the easiest thing to do would be to replace the blower fan or the entire cooler itself with an aftermarket one that plugs directly into the PSU or motherboard and just ignore the thermal read outs on the GPU, or is there a way to get the sensor going again that I'm missing? anything I can try before ordering a repalcement fan or cooler? 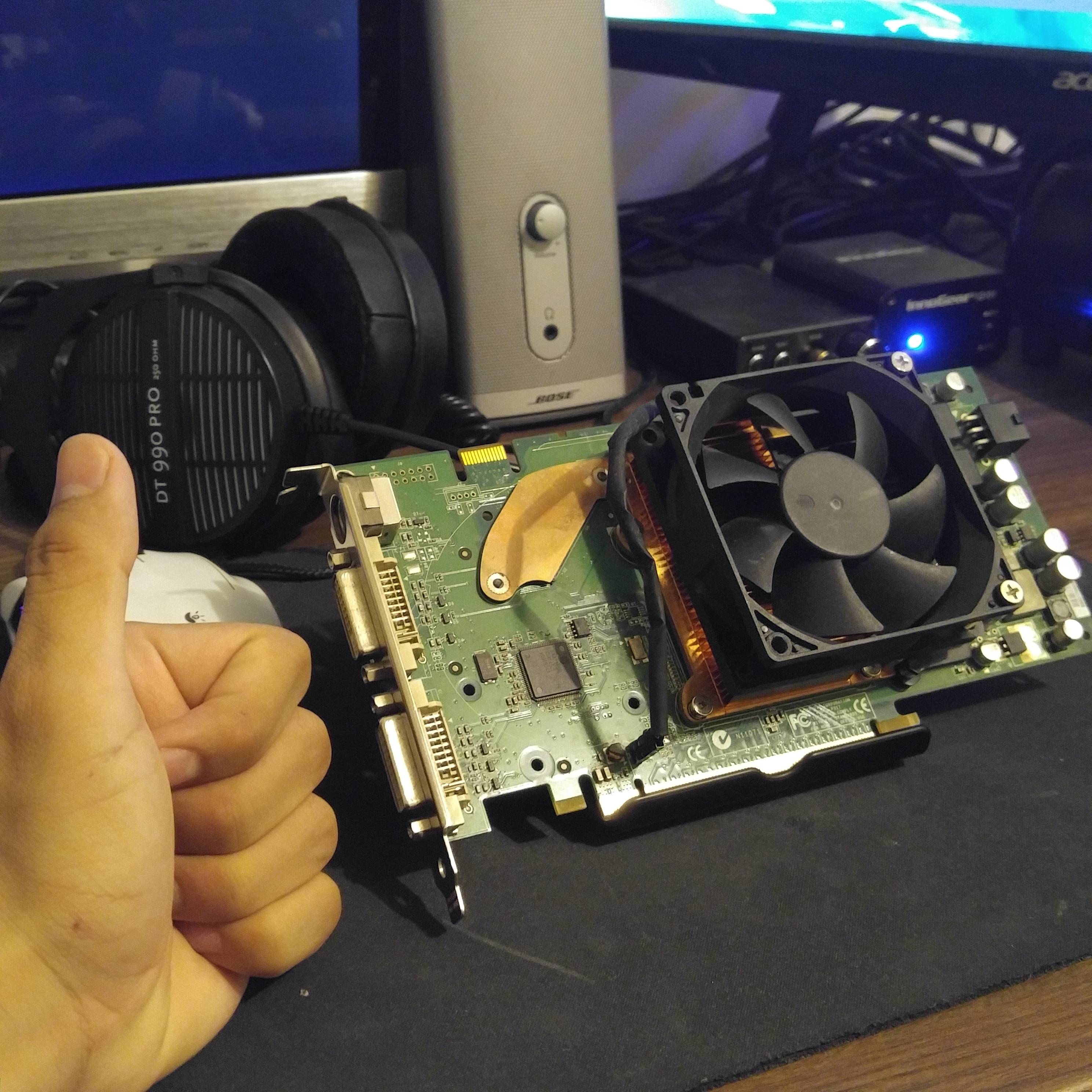 Boy is it ugly, but it sure does work!

Sounds simple enough, got a 92mm that's not too bad, maybe that could work? be hard to if it is tho because of the false readings, was also looking at these 2 pin to 3 pin fan adapters, just connect the blower fan to that and into the motherboard, or would that cause the fan to spin 100% anyway?

It's not PWM so you couldn't control it on most motherboard, but just pick up a quiet fan

going to try the thermaltake 92mm I have first then, it's fairly quiet and isn't really any louder than his case fans anyway, going to use my heatgun to test altho that will only give me ambient temperature inside the case but it's still better than running it blind, cheers for that, dunno why that didn't occurred to me seems like a simple yet effective way around it.
google didn't help one bit, basically every forum I saw about the same issue results in replies like "cards rekt m8 get a nu one" etc.

got the blower fan and shroud removed but I'm a little confused one where to attach the fan, since it a reference design and the air get channeled through it horizontally and not from the top

Wait does forcing the fan speed manually in Afterburner not work in this case? Would think that it would since it doesn't bother reading the thermals when you set it manually.

Reference 6950 should only need 45% maximum fan speed to keep below 75C while gaming. If that is a more acceptable acoustic level for you it could be a decent enough solution.

Or just get an Arctic Accelero.

Unfotunatly I can't ajust the fan through both Catalyst and Afterburner which is very annoying but I figured out a way to mount a fan at a angle into the heatsink so hopefully it can keep it cool enough to run on stock speed, I also mounted a 120mm on the side panel in-taking air so hopefully that'll help

So it seemed to have done the job altho I can't get actual temps of the GPU to be sure but I have messed around with a couple of games and benchmarks and it seems to be completely stable with no throttling of any kind and more importantly no crashes or artifacts, as you can see from the first two pictures there's a bit of a gap between the fan and the heatsink so I just covered it with some duct tape (as seen in the 4th photo) to be sure all the air is getting push through the heatsink, also going to include the Afterburner temp readings so you can see that the card is on crack It's things like this that make me laugh when people say console peasants. This is great. Good job. Most likely runs cooler and quieter for a small price of looks. But who cares when you don't have a side window.