hi everyone, recently i've been witnessing random shut down with my computer, and sometimes even when it was shut off, when i turn it on, it turns on briefly (1 sec) then shuts off then it reboots automatically.
i opened up the windows event journal and seen that it was a kernel power 41 error that has occured everytime my pc shuts down by itself, and from what i've seen on the net, it was probably related to a faulty power supply.
my PSU is an OCZ Modxtream Pro 600w that i bought about 3 and a half year ago and never had a problem with it and gone through multiple upgrades over time.
for now i'm using a Core I5 3330 @3Ghz, 8Gb of 1600Mhz A-DATA, an MSI B75 gaming motherboard and a twin frozr HD7950 Boost Edition.
today after multiple shut down, i took off the 7950 and let it run with the integrated gpu and until now its running fine for hours but i'll keep you posted if anything changes.
PS: on the newegg page of this PSU, many comments stated that they had their power supply died after 3 years and a half more or less, just when the warranty expired.
and sorry for my english i'm french but i hope you will help me find a solution, because as of now i'm planning to change the psu but i'm not sure.
i have also tested th voltage output on the 12 and 5v rail with a multimeter because HW Monitor showed me 8.1v on the 12v and 5.9v on the 5v rail, but with the multimeter i noted a voltage output of around 12.4v on the 12v rail and 5.07v on the 5v rail.

power supply test 20$, hmm not sure of there availability in france.

it's available but it's the same thing as a multimeter, just more specific to power supplies.

It is possible that with the video card installed the power draw is causing the unit to not be able to supply enough thus HWmonitor showing the lower voltage?

i've puted back the hd7950 and been monitoring the shut down via the windows journal events, and seems like the shut down occurs every 30-35 minutes.
i will proceed an OCCT and Furmark stress test and report back if there's changes.

hi guys are you still here?
i'm thinking of buying a new PSU, the Cooler Master G550M, what do you think of it?
i'm scared that my OCZ will fail soon and this new one has a 5 years warranty, i read a techpowerup review and sounds like a good PSU for the money with decent quality.

it seems that no one is paying attention, anyway i've no where else to ask so i'll state some other details that i found recently if anyone can help.
i've run a memtest86 and after few hours of testing no errors was found, i've formated the pc with a fresh install of windows, still shuts down randomly.
other thing, it seems that my pc is doing what is called cold boot double post, for exp, if it was shut down the whole night, when i turn it on, it powers on for like 1 sec and then shuts off for couple of seconds then run normally, and some time it may occure 2 or 3 times successively before booting.
i'm pretty sure that it's related to my power supply that i suspect it is dying.
anyway, other than the Cooler Master G550Mn i've also found the Antec Neo Eco 620C, what do you think of it?
thanks to anyone who took the time to read and response.

Do you have any extra power supplies that you can use? The straight way to troubleshoot PSU is to check with a known good psu. Also, voltage checks with a multimeter is not a complete diagnosis, volts may check okay but you wouldn't see the voltage spikes accurately. For that, you will need an oscilloscope to check the ripples / spikes.

I had a similar PSU, OCZ ModXStream Pro 500W, which went bad after 3-4 years. The volts checked okay, but computer wouldn't post. Swapped a good EVGA Supernova G2 and worked very well ever since.

Between the PSU's you've suggested, I would go with Cooler Master. But both of them are low, mid quality at best. If you want higher quality, I suggest choose another maybe Super Flower, XFX, Seasonic

Maybe double check if PSU or motherboard is failing before you make a purchase. If you know that the extra Dell PSU is running okay, try using that to troubleshoot. Install the Dell PSU and unplug everything from motherboard (dvd drive, graphics card, etc) leave CPU assembly, 1 Stick of RAM, and something to boot from (you can use your windows hard disk, or any live disk). Use it for a while, and see if it still reboots. If it reboots even with a known good PSU, then you have motherboard problem.

Do the same with the OCZ PSU (unplug everything on mobo except cpu, ram and disk), if it reboots with the OCZ then you are certain that PSU is failing.

From where I live, EVGA SuperNOVA GS 550W 80+ is almost the same price as cooler master G550Mn. I personally would pick EVGA. https://pcpartpicker.com/part/evga-power-supply-220gs0550v1
Or you can get at least tier 2 PSU that would fit your budget:

Hi there. This is the new Power Supply Tier List for Tom's Hardware. The new tier list has all the current features of the old list, along with new ones, such as platform OEM and 80+ efficiency col

That psu has 2x 12v rails - one is for the 24pin + 8pin atx. The other 12v rail comes off via the modular cables.
A 7950 generally like to have > or = to 25amps. Of which is its maximum for that rail.
Given the age of the psu, things start to degrade, the amount of output decreases, ripple and transient response readings start to degrade as well.
It could then be suggested (but not 100% proved without testing it) that the PSU is at fault.
Suggestion - good quality psu with a strong single 12v rail. Something like a XFX 550w (uses a quality oem (seasonic)). Or even stuff from Corsair, Silverstone, Antec HCG's, Seasonic, Superflower and a few of the FSP and Coolermaster range.

today i will test with another power supply from a friend, it's a Sharkoon SHA-560W, and return for feedback.
for the new PSU, the EVGA one is not available in france, so i think i'm gonna get the CM G550M if it appears that my OCZ is failing (which i hope because every other componants are brand new except the PSU).

perhapds my psu have "weakened" over time.

This happens. It's very possible your PSU is on its way out. I'm betting it's that.

Volt and Temp readings in software are never very accurate. Multi-meters for life!

Did you test the 12V rail while the system was under load?

i tested with another power supply, same results. so i puted back the OCZ and now my pc is running good but there's some weird things happening and it's very random.
i get 90% of the time a double post (my pc turns on for 1 sec then shuts off, then boots normally) whenever i turn on the pc after the night switched off.
the shuts down are very random, for example, these 2 days, i only had 2 or 3 happening.
i tested the 12V rail under load, it's around 12.3V.
for now, im using 2 HDD, 1 fan for the CPU and my HD7950, and switched the placement of my ram, i puted them in the first and third memory slot and sounds like nothing changed.
in case you wanna now the age of my componants:
my PSU is 3 and a half year old
the motherboard + cpu + ram are around 18 months old
the HDD are 4 years old
the gpu is 1 year old

Now my pc is shutting down every 32 minutes ...

i took off everything, and now i'm using my pc like this because i thought it may be the motherboard. 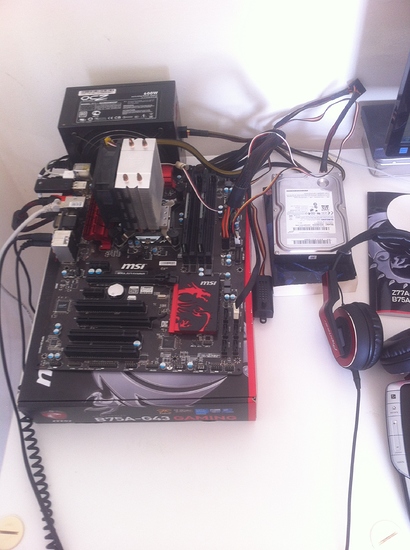 hi, after few days, the problem is still here, sometimes it just works flawlessly but today for example it started shuitting down again every 30-35 minutes, i noticed that when powering on the computer this morning, it did a cold boot, it didn't happen the few days when the pc worked fine.
anyway i'm starting to think that it may be related to my motherboard, thing is, it is brand new (only 1 year and a half old) and has no warranty, so i might have to buy another one.
it would be a shame to throw this MB but i'm deeply convinced that it may be fixed somehow because everything seems fine, i can even launch OCCT or Furmark in these 30 minutes a it works flawlessly before it shut down without exceeding high temperatures (CPU Temp less than 55°c and GPU Temp less than 75°c).

Without any tools, the most you can do to troubleshoot is to do it by process of elimination. Strip down the system to the basics: connect only the motherboard, CPU w/ heatsink, PSU and one stick of RAM. Check the UEFI, if all looks good and see if it is stable with just these components. If it still gets shutdowns this way, then one of these components is faulty.

If you are okay with these, then add your hard disk. Check again if it reboots.
Then add your gpu, check again if reboots.
Basically, you are adding the components one by one and then checking, until you get shutdowns to know which one is faulty.

i've already checked every componant separatly, booted the pc with just the bare minimum (MB+CPU+1 stick of ram (one each time+1 HDD), i got the impression it is still the same situation, random shutdown can accure.
my pc has been running for more than 24 hours and working good (withall the componants installed), i strongly bellieve that if i switched it off the night before, it would've done a cold boot this morning and experienced random shut downs.
after all these years of assembling and troubleshooting pc's, that's one hell of a problem that i got here, very strange one, and unfortunatly it happens with my personal rig, what a chance.