Oh man.....I'm tired of asus, really. It's not the first time an asus board has RAM compatibility issues but it's frustrating that it happens to my clients, twice. I tried reseatting the 6800k, still get error 53. I tried 1 stick of ram, in all the possible configs written in the manual. I tried 2 different model numbers of ram, still get error 53. I tried flashing the bios but it never worked. So I shipped back some ram (cosr me 45$ to return + 15% restocking fees for 64gb of ddr4 from ncix which is about 75$ fees) to try and test with another model, which is in the approved vendor list, still error 53 on all configs possible. Tried with the board out of the case, still error 53. I just hope that some social media rant on facebook, twitter and instagram at the same time will make them react. 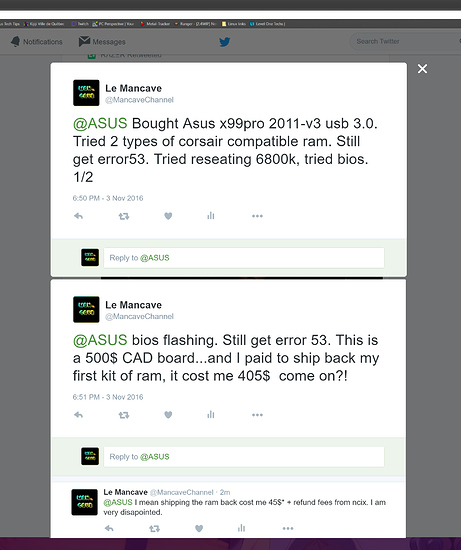 ASUS quality control seems to be slipping as of late. I know in the past they were seemingly THE board manufacturer to get, but nowadays I pretty much don't even bother looking at them.

@anon59440203 said it first, I'm just going to +1 to that. Friend of mine (a older guy in his 70's) tried his hand at building a computer for the first time and, on my suggestion, he picked up a Asus H170 MB and it was deemed defective from the factory. Tried 2 different SKU's of memory (both on the approved list for his board) and still had issues. Short story long, he went with a MSI board and hasn't had issues since. (It used to be MSI wasn't so great of a brand, but in the past few years they've gotten a lot better.)

Sorry you are having issues @DeathSpell. Especially on such a premium level product. Take a few deep breaths or maybe a cold (or warm) beverage and try again in a bit.

I had to RMA my motherboard at one point...I got a new one and I'm still using it but last night it started doing really weird things. I contact ASUS support and they gave me some things to try and the board seems to be ok but I'm still worried I'll end up RMAing this board as well. My last board did some really weird things right before it died too. I could only boot the system by pressing the GO_BUTTON to run MemOK but otherwise the system ran fine. Eventually the board just completely died. This board while not doing the same thing is doing other spooky shit so I'm holding my breath.

Well X99 and certain memory kits can realy be a pain in the ass.
Its definitely not only Asus boards that could be picky on memory.
I have seen memory issues with manny Msi boards aswell.
Like the Msi X99A Xpower Gaming Titanium for example.

Yeah, Asus quality control is slipping down on a really really steep hill. And I've been there too, had to do the same things you did buddy. RAM wise I think Corsair's RAM are no more the super reliable brand they used to be. Got some G.Skill RAM now and they play really really nice with my Asus board.

But they are on the qualified vendor list, and the model number is exactly what's written on their charts.

Motherboard is the post failure prone part in the PC. After my Phenom X3 was seated in it's third MB I started looking at MB's as a large piece of plastic that holds the CPU.

Oh which MB lasted the longest? The one that said "DELL" on it.

Unfortunatly the X99 platform has allot of flaws yep.
I wouldnt be suprised if intel will abandon it pretty soon.

Asus is trash, I have a Z97 and I get bluescreens from it

We had this issue with error 53 using the 6900k on that board work today, new bios fixed it. Hope it solves your issue too.

i think a saw some rumors somewhere of the follow up to x99.

to everyone if Asus is not the mobo manufacturer to get for its quality anymore, which one is it?

As far as i´m concerned Asus still makes the best boards, especialy on X99.
Gigabyte with their latest release of Broadwell-E refresh boards comes a second.
And the third place its a toss between EVGA and Asrock.

If we gonne talk about which board offers the best bang for buck.
Then i think that we cannot realy get arround the Asrock X99 Taichi.
I mean for $220,- this board comes with a good onboard audio, dual intel lan´s,
bluetooth and wifi allthough the wifi module isnt the fastest arround 433mbit/s, still more then enough for most internet connections.
And it has a good vrm implementation.
You cannot find that manny feutures on a X99 board for that money.

how about mainstream platform z170?
and no not bang for the buck, but quality, quality control, and longevity

The thing is that it would not post at all. I tried to flash the bios but it failed after 5 seconds, I tried different file names as mentionned on asus website but nothing. I switched for the gigabyte x99 pro gaming, still hasn't arrived yet I'll let you guys know.

The thing is that it would not post at all. I tried to flash the bios but it failed after 5 seconds, I tried different file names as mentionned on asus website but nothing. I switched for the gigabyte x99 pro gaming, still hasn't arrived yet I'll let you guys know.

Well basicly if you are unable to reflash the bios using bios flashback.
Then it could be an issue with the bios chip.
Normaly Asus should replace that.

But yeah the Gigabyte X99 Ultra gaming basicly is a realy nice board.
Great vrm.

I am a Asus disciple, that for many many years, since Abit folded, but the recent models are far from the precedents milestones, the P4 478, the 775 and the 1366, X58........to the X79, the newer models seem to have more people with problems than previous models. (all facts taking into account).
When I made the harsh judgment on Asus, I was actually more aiming at the X99 platform , Asus can only produce as good as the Chips they are supplied with ! (IMO).
Again the compatibility IS A BIG FACTOR, and just about everything is made and produced with the producing company s best interest and profitability, not the satisfaction of us maniacs.......(us that is) and a decent compatibility, specialty to older hardware.
as a reference, did anyone loose their HP printer after the latest update????????? we lost 3 printers, that seemed not compatible anymore...........reinstalling the older driver solved everything!

I haven't touched Corsair memory for years, given the fact that they change IC manufacturers faster than I change my underwear. This leads to too many problems with memory compatibility. Also, ensure that you are using the latest BIOS for the X99 series of motherboards. The earlier versions were riddled with stability problems, including BIOS corruption.