So my shiney new gigabyte x399 mobo brags about a fancy DAC and audio components.

What do I use that for? I have a 2.1 Logitech THX speaker system plugged into the TOSLINK connector on my monitor (an LG 4k smart TV) and it sounds great. Sound is provided via the HDMI connection, by my GPU I guess?

Would there be a noticable difference connecting the speakers to the motherboard TOSLINK instead? I never really see audio quality mentioned in GPU reviews, I’m guessing HDMI audio isn’t very popular?

Is the DAC even used by a digital speaker system? I’m guessing no, it sounds redundant?

HDMI and Toslink are digital.
There is no difference between getting Toslink from the monitor or from the mainboard, the DAC in your speakers is the only one in the signal path here regardless.

It is commonly used when a computer is connected to a TV (wich commonly have speakers built in).

optical SPDIF connection to 2.1 speakers is still digital
will be DAC in speakers

This makes sense. Thanks for the information.

@MazeFrame and @nikgnomic are correct, but I wanted to throw in one last bit-

sometimes TV’s resample digital audio, so they aren’t always identical; e.g., if you send a TV a 5.1 DD signal over hdmi, the TV can decode it, then may or may not re-encode it before retransmitting over spdif- depending on the TV and its settings, you can end up with a signal that, while digital, is mixed down to stereo PCM. if you have a setting on your TV’s menu, look for “bitstream” vs “LPCM” or similar.

For those speakers using the dac on the board wouldn’t change much. Best to keep using them the way you are imo.

Probably a down-mix is needed, I don’t think my speakers have any sort of decoder (none is advertised). They’re not true 2.1, just 2.0 with a crossover for the subwoofer, rather than a discrete channel.

You could test that theory by changing your output to 5.1 under playback devices > configure, and testing the sub channel. You can remove center and sr sl to make it actually 2.1

The TV might not have a multi channel decoder either? Unable to select 5.1 as an output option under speaker setup. 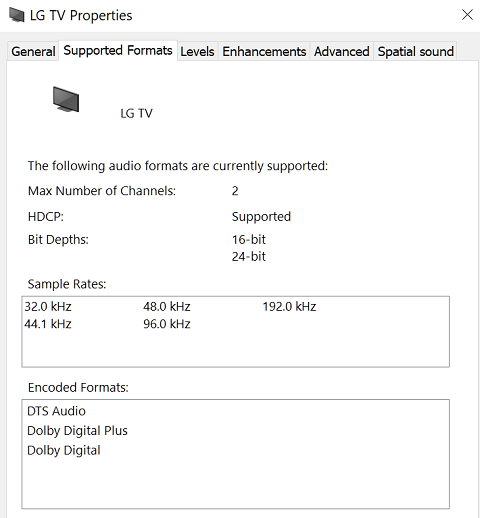 It should. I dont know much though because the only thing I have, setup wise, thats similar to yours uses ARC to a receiver. My desktop is literally RCA to a class D amp powering a set of Elacs. I’m not a speaker set in a box kind of guy.

DTS and the Dolby Digital options are 5.1. spdif can only take 2 channels*, so to get 5.1 over it, the signal has to be encoded into a stereo bitstream of 5.1 data, and requires a decoder at the other end, hence they are under “Encoded Formats.” This is also why they are lossy formats.

Since you’re just using stereo, you want 48khz, 24-bit. Broadcast sample rate is 48k, so I’d expect most digital media to mirror this. Choosing 44.1, while ok, could require filtering and sample rate conversion that is otherwise unnecessary. For testing the 2.1 thing, you can choose any of the aforementioned encoded formats.

*FWIW, you may have heard of ADAT, which also uses an optical connector- this can handle many more channels of uncompressed audio, but needs to be supported at a hardware level, so isn’t found on consumer devices, despite using the same connector.

I don’t know why but when I use 48k there’s not as much detail in the highs. I usually go for 96k. Bit depth doesn’t seem to make much difference. I don’t know if it’s a windows audio quirk or what. None of my source files are that high sampled.