Fallout 4 on a Macbook pro 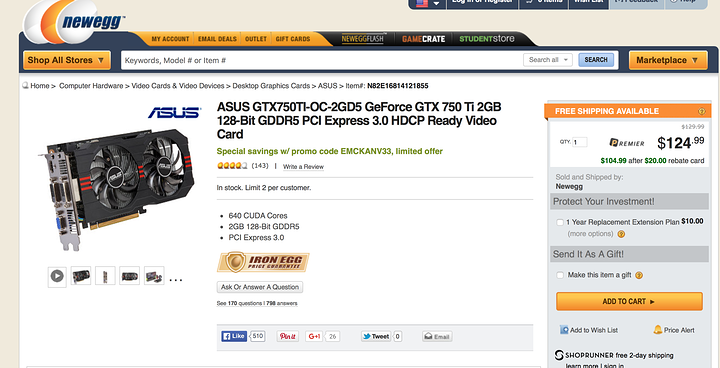 Sorry but you won't be doing it especially not for $200 which I assume includes the cost of the GPU.

If it is even possible, it is flaky on PCs right now, it is going to be really expensive as you need an enclosure.

Would I still not be able to even if i combined this with the Akitio Thunder2 PCIe Box?

Okay, so it's kinda obvious Bethesda may have overestimated the specs required. I'd go to say your MacBook can run it if it could run Skyrim. Rather or not it's smooth is another issue. If you at least have a HD 3000 graphics is say your good to go.

The minimum specified graphics card on the steam store say that this card is, bare minimum, so I wouldn't expect you to get a playable frame rate on anything else other than the lowest settings. And on the side of externally using a gpu on a laptop, I have no idea, I've not got experience in that area.

I would try for the 950GTX card, it has notable improvements and is only fraction more?!?

The adapter to run the card is going to be pretty expensive. If the OP can purchase that then I'd definitely recommend looking into a 380 or GTX 950

Fallout 4 isent even comeing out for mac....sell the mac build a pc

Also these sorts of things usually don't work for GPUs. GPUs over Thunderbolt are wonky as fuck.

Hell for the price of a GPU, cable and enclosure you could build a half way decent PC...

I was actually researching this exact thing a few weeks ago. Been wanting to build an egpu over thunderbolt for a while. I finally came to the conclusion that I'd rather just buy an Xbox One now that native Xbox to Windows 10 streaming is out. The streaming works really well and Microsoft is automatically upgrading Windows 7 and 8 installs to 10. Since I was going to buy an Apple TV for $200 and the eGpu was going to be around $400, $350 for an Xbox One is nothin'. Streams Netflix, Hulu and movies.

Graphics-wise, the MBP with the 750m can render about 800 gigaflops. The 2015 model can muscle out a teraflop. The Xbox One can do 1.3 Teraflops and the PS4 1.8. For me, .8 to 1.3 is a big jump. Plus developers will continue to hone in their skill at making games on that platform via familiarity. It's a win-win for me.

Honestly, though, you may be able to just run FO4. I run Skyrim at the highest settings. And Battlefront looks decent at 1080p/medium detail: https://youtu.be/kqD1g9rgf20?t=1m25s

OH! And checkout Liquid Sky. That may be the future. It's out of Beta in January.

Would rather say the Xbox streaming is working alright but not "very well", it still has quite a few issues. https://www.youtube.com/watch?v=21YCNQzHR4s

I use it, It works fine. However, I only use it to stream games to my pc.