I am currently serving up WiFi to my grandmother's house across the street. It's about 400 feet away from my router and she averages between 10%-15% signal strength which makes sense considering how far away her house is. The router I'm using is an AC1900. I would like to increase the signal strength so she can have better WiFi access but not really sure the best method to do so.

I thought about replacing one or a few of the standard antennas with high gain antennas but not sure if that would be enough for what I'm trying to do. I am open to any suggestions anyone might have but would like to keep the price down to a reasonable amount.

You could try a Ubiquiti PowerBeam kit. 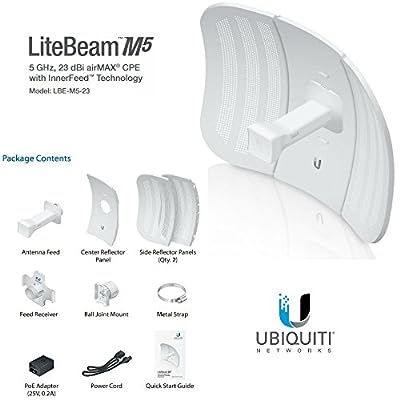 The LBE-M5-23 is the latest evolution of a lightweight and compact, outdoor wireless broadband CPE (Customer Premises Equipment) from Ubiquiti Networks. The LBE-M5-23 was designed to be an affordable ...

And you would need two of those, plus an access point which is another ~$80.

You could try with antennas, and it might work, but reliability and signal strength may not still be that good. An alternative that's a bit less expansive than the airMax solution would be to get a second router (I had the Asus AC66U in mind) and set it up in repeater mode. You link the router (AC66U or other) to your home router via 2.4ghz or 5ghz (you'd have to do some testing to see which works better in this specific case, 2.4ghz theoretically has higher range but may or may not be better depending on how congested it is in your area) and then setup the router to give off a different SSID that you connect all your grandmother's stuff too.

I have an AC66U and can confirm that all of this is possible and works with this router, and you can find them on amazon for ~$100: 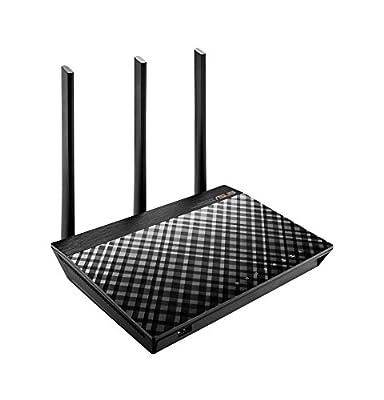 RT-AC66U B1 delivers 3x3 802.11ac Wi-Fi with up to 1750Mbps throughput and extensive coverage. Easily setup and manage your router with ASUSWRT and the ASUS Router App. Integrated USB ports enable sha ...

any way you look at it your going to be roughly $50 into it, exactly how much bandwidth does she need? a cheap $20'ish n150/450 router with removable single antenna and a $15 yagi can act as a link, at 400' the yagi signal pattern would likely cover her entire house, and it's 2.4ghz so obstructions will be less of an issue, or you can look up a wifi pringles can 2.4ghz antenna if your decent with a soldering iron, or you can cheap out and redneck it and place a cheap wok 8" behind your wifi router antenna (will trash any signal behind it)

best advice is eat the coin for a few n150 single removable antenna routers (I used a pair of rosewill rnx-n150rt in similar setup minus the yagi) that can run ddwrt and a cheap ac wifi router (wally world has a $30 one) to allow ac connectivity, set the n150's up with yagi's on each pointed at each other on an unused (use cell app to find clear) channel and run them as a dedicated bridge.

400' is a long way off for wifi without a bridge of some sort, for the use case I would look at a single (no bridge hail mary) or pair of yagi like these 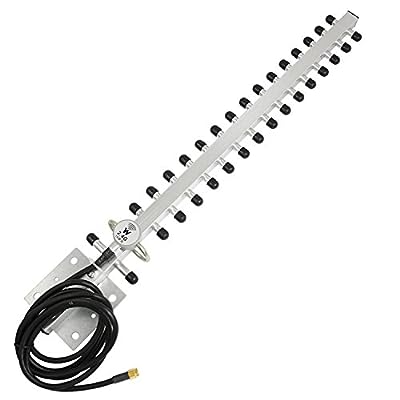 FCC rules for 2.4GHz fixed point-to-point allow for much more than point-to-multipoint, so you can use a much higher EIRP than your router. Someone correct me, but I believe that every 1dB you decrease your radio, you can add 3dB to the antenna gain, so a 24dB radio and a 24dB antenna will give you a very strong starting place to link them up.

the problem is your not actually running point to point, it's still multi point just a very narrow beam width, and the eirp is a total cap value, you can't stack twice and count it once, eirp is literally the total gain of both antenna system and transmitter, also depending on what channel you choose you can get into the ham radio segment of 2.4 band in which case you are a secondary user and subject to any number of rules and regs including greatly reduced legal eirp in that range (avoid the higher channels).

honestly this should do the trick for you.

Your grandmother probably isnt using much bandwidth to begin with and these are really the best of both worlds. Really good SNR, great antenna for range, its the kali users go to for wireless pentesting. I have the NHA and the NH. The NH is slower but longer range. I can pick up my neighbors wireless at -72dBm in my basement, which in my experience -75dBm is the threshold for packet loss for most wireless receivers, though this depends on the amount of noise on the channels from other wireless around you.

If you arent already you should be using exclusively 2.4Ghz. The higher the freq the shorter the distance it will travel. 5Ghz is not a realistic goal without directional antennae. You'll want your 2.4Ghz to be on channel 1, 6, or 11. Whichever is the least saturated by other networks around you.

You could also pick up a cheaper router that is ddwrt compatible and using it as a repeater in a good reception spot. I do this for my garage with a linksys e1200. You'll need to have a way to do a site survey showing the signal strength in dBm. The values will be negative so the closer to 0 the better the signal strength.

You could always to this (german):

basically same as sticking a cheap small wok behind, results may vary and it kills any signal behind the wok/parabolic

and I've got to get out more, apparently n150 single removable antenna routers are now a unicorn.

It's not overly difficult to add an rp-sma connector onto a cheap router (cheap pigtail from fleabay/banggood/amzon etc, be very carefull picking out as there are multiple type's with the center pin orientation reversed).
Probably more involved than your willing to get especially if your not handy with a solder iron and small fine work, still the most cost effective reasonably robust link at your range.
past that dealing with ubiquity and line of sight/environmental issue's is next best option, all of the router repeater options may work to varying degree's but your still way out at fringe range dealing with omnidirectional signals and interference from other closer wifi nodes, tree's and the like, a dedicated 2.4 bridge link with yagi's is your best bet.

Are there telephone poles? Hang a cat5

Are there telephone poles? Hang a cat5

The only problem with that I can see, is you have to use a special type of Cat cable. You can't use much any can of Cat 5 cable.

Yeah you can, do it all the time in telecom. Regular old rubber shield cat5e some places it's been hanging for years. It's not ideal but it works.

These are fantastic ideas. I'm going to look into some of these and give something a shot and I'll let you guys know how it went.

Preterminated fiber and a pair of media converters will run you about a $100, and will do a gig and is upgradeable to 10G/40G down the road (look at fs.com)

A pair of Ubiquiti Nanobeam will do about 400 up+down (aggregate), will run you around $160

A pair of Mikrotik disc lite 5 will run you around a $100 and will do 100Mbps in each direction.