This post should be an interesting one for all of you, especially for those who´re using an AMD FX-8120/8150 CPU.

I´ve done quite some research on the Bulldozer architecture. It is, as most of you should know, module-based.

Just to make sure that everyone, who reads this, is up to date I am going to explain it.

The 4000 series is a dual module CPU with 2 cores per module.

The 6000 series is a trippe module CPU with 2 cores per module.

The 8000 series is a quad module CPU with 2 cores per module.

Take a look at this picture beneath. 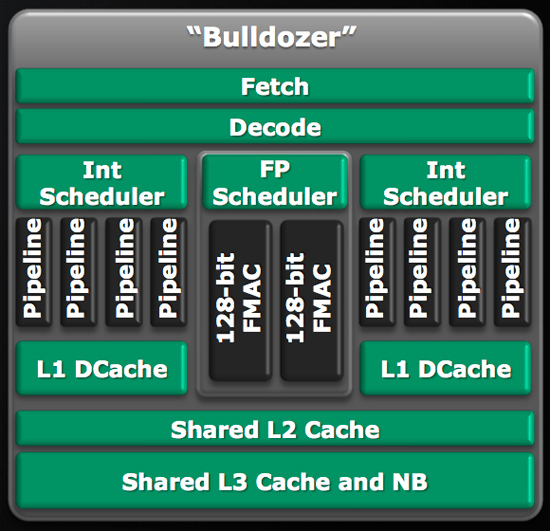 Here you can see how a Bulldozer module is designed.

As you can clearly see each core has its own INTEGER SCHEDULER and its own LVL 1 CACHE.

However, the rest of the resources are being shared. Those are the LVL 2 CACHE, the FPU SCHEDULER, the FETCH and DECODE UNIT.

This is also the main weakness of the processor. This architecture literarely chokes the cores.

In heavy multithreading the CPU is good but in light threaded or even single threaded apps it simply fails. The reason is the sharing of resources.

Many people bought this processor with the expectation of getting a potent gaming CPU which it is not thanks to it´s design.

The 8000 series is special one thanks to its 4 modules.

Now, before I continue I want to apologize to Logan for posting this thread and sort of being a buzz kill as I can imagine that he´d want to add this in one of his upcoming videos. Maybe not, I don´t know. I´ve talked with him about this idea of mine via PM on youtube a couple of days ago. He was interested and promised to check it out and inform me about test results.

Let´s say you´ve bought an AMD FX-8120/8150 and in order to play Battlefield 3 just to notice that it´s not performing very well. Well, that´s because Battlefield 3 only uses 4 cores, to be more specific 4 threads. So if you´d run that game on this kind of CPU, at it´s standard configuration, you´ll experience rather bad performance. Why? That´s because the game will only utilize the first 4 cores of your CPU, meaning the first 2 modules. Remeber that two modules only have one FPU each, which are essential for good performance in video games. Not only does scheduling under Windows 7 slow the CPU cores down but also sharing of important resources.

However, there´s is a trick to counter this. If you happen to own a motherboard which has got a core-unlock feature you can use this to turn your AMD FX-8120/8150 into a true Quad-Core FX processor.

In the BIOS settings of my Gigabyte 990XA-UD3 it would look like this when all 8 cores are turned on.

Now in order to turn this CPU into a true Quad-Core, where none of the 4 cores will have to share resource, you´d have to configure the CPU like this:

Core 0 enabled <--- This one is actually always enabled. You can´t even disable it. At least not on my mobo.

You will basically turn off / deactivate / disable the second core of each of the 4 available modules ending up with a Quad-Core where none of the 4 active cores will have share resources.

If you don´t beleive that this configuration works then take a good look at this forum:

There you´ll see that this improves Quad-Core performance significantly. This should turn your AMD FX-8000 series CPUs into a more potent Quad-Core CPUs for gaming.

Now what´s interesting about this is that this test clearly shows / exposes the great weaknesses of the module-based architecture. And yes, I know that it´s a total waste to buy an FX-8120/8150 just to turn of 4 of its cores and use it as a Quad-Core. I just think that this would give those who already own one the oportunity to at least turn it into a true Quad-Core if they want to play a game with decent CPU performance.

One more thing. This configuration wouldn´t only turn it into a stronger Quad-Core it would also improve single-threaded performance.

I also believe that by using this configuration the CPU will consume less energy and therefore produce less heat. I cannot prove this though as I haven´t tested it myself (I don´t own any Bulldozer or Trinity CPU) and in the linked forum there are no test results on that matter.


If any of you guys have done this with their FX-8120/8150 CPU would you be so kind and tell me whether you could notice a decrease in power comsumption and heat output?

I know that it´s a long text. Please bare with.

I'd be interested in this too, I'm not a Intel fanboy, I just choose them because they perform better in the things they need to

Don´t be so defensive. There´s no need for that. Anyone who´s got a brain and can read can clearly see that you´re not an intel fanboy. You´re a man of reason. That´s good.

Maybe I will purchase the upcoming Piledriver FX-8300 @ 3,5 GHz just to test it. After all, the base design is the same. From what I can remeber each Piledriver module will get an MMX unit and instead of just one DECODE unit it will be two per module. So this also means a little less sharing.

I own a FX-8120, was planning on doing some benchmarking this weekend anyways, so I can give this a test.

I own an FX-8150 i can't run any benchmarks right now but i will run some when i can my steam name is trainergames look at my profile and let me know what games you want me to run.

its not a weekness in the module-based architecture, but a in the Single Floating-Point Unit for 2 cores. now let me say that its impressive that amd was able to make their FPU perform as fast as they did but its wasn't good enough. The new cpus will perform better mainly because of the improved FPU's. the architecture isn't really meshing with the speed of the fpu's untill excalibur

Especially Crysis, FarCry 2 and Arma 2 would be interesting.

Min fps and max fps. Average fps is of no importance.

CPU usage during tests is also important to know / note.

Also, it would be good to know the details of your entire system.

I was running an FX8150 I did some tests with setting the core affinity for ArmA2. The game is known not use more than 4 cores. If did find a small improvment setting it to 0,2,4,6 however the improvment was very small. All in all whatever I did with the CPU the game ran noticably more slowly than the Phenom II 1090t I had before.

@ PendragonUK I am very sorry to read that. Did you sell your Phenom II 1090T? I hope not. I´ve taken a look at the AMD A10-5800K benchmark results from Anandtech´s Part 2 review. This APU uses Piledriver cores and the results impressed me especially the power consumption. So the Piledriver should be good.

Can´t wait for the AMD FX-8300. This month is going to be superb. I think, I´ll scratch my plans on building an Intel system. ^^

I have been running AMD since K6 days and "was" a confermed AMD fayboy but the FX faildozer just kicked it in to touch. Heaven benchmark, jumped well over 1000 points by swapping CPU and RAM (2700 point with the FX and over 4000 with the 2011 Intel) The FX8150 chocked my 7970's something terrible.

I hope you are right about Piledriver but I have read a 15 to 20% performance bump over Bulldozer. Thing is that's just not enough! It needs 5% just to beat the Phenom II. Top end Ivy will still best the top AMD and lets not mention Sandy-E because that's just embarasing. I know AMD will still represent a cost vs performance advantage. However you you are going to talk about your top CPU and being FX and enthsuast overclokers CPU it might be a good idea if it at least as fast as the best from your main competition. At the very least it should be able to get in to double figures on a Cinebench CPU run, till then they should remove the FX name.

Yes that is me,it will be a few day before i can start running them though cause i just found out my car needs a new water pump,and the guy i have work on it is a couple towns over(about 25 miles),and so is the place i work lol,so i have to stay away from ym pc for a few days while it is getting fixed.

I have a 1080p screen,so i can run it at both resolutions,i have dual screens so i can keep an eye on cpu usage,i will also see if it makes a differance on my temps.