Hello, I just want to know how a setup with the SR-2 with dual X5660-90s stacks up to the newer cpus? Not going to buy right now, but it would be awesome for the shits and giggles later. Also are there any other dual socket motherboards that support overclocking?

I've seen the Classified SR-X, but Xeons for the 2011 socket are locked up the bum so that doesn't really work. I've also read about some Intel board that tried but didn't success. Any thoughts?

Btw the SR boards are really expensive now i would say ... maybe not a great thing... probably can get away with the server motherboards although i'm not sure any boards other than the SR can overclock

I do know that the SR boards are expensive, but I think it would be worth it :D, could most likely get away with a server board but that's not really all that fun.

but performance wise
some of the really high end single CPU xeons that are 12 cores or higher have better multicore scores usually
single core no as much but still...

They are more or less collectors items, I can agree on that. 500 bucks is not really a system here in Sweden, but i get where you're coming from. I'd be up for it even though it's pricey.
But it needs some watercooling due to the chipset being hotter then the sun under heavy loads, but that would just look really cool with some hard piping :D

Granted, it is an ES CPU but still
(I would recommend some of the higher core count xeons but they all are at 2 Ghz or 2.2 Ghz where this is at 2.5-3 Ghz so it has better performance in games )
and this way its one CPU on LGA 2011 V3 so if you wanted to upgrade later to a 5930K or 6xxxK CPU later you can

Damn, that's a cheap 12-core, but why I brought up the SR-2 is for it's overclocking and new Xeons don't overclock, maybe the ES ones do overclock, that would be pretty noice. Any idea if that one oc's?

to get overclocking you will have to look for certain chips and they are only on LGA 2011 V1 and also only 6-cores. Which isn't bad per se but it would limit you somewhat, which is why i recommended the 12 core that is locked as the stock speeds are pretty good for gaming and really good for multicore stuff. And offers a really decent upgrade path for you.

But, the unlocked LGA 2011 xeons are rather hard to find now or rather high priced like this:

I've taken this out of my old computer to replace with a newer model, worked when I last took it out. I've cleaned thermal grease off with alcohol and placed it in a plastic chip holder. | eBay!

That's a bit of a bummer, not that I even know what to do with 12-cores running @ 4,5 ghz for anything than to show off. But thanks for the Information about the Xeons :D. One of those cheap ES 10-14 core chips would be nice to have for VMs.

Would be a amazing if I could buy that right now, but sadly I don't have the funds for it atm. In due time though ;)

SR-2 loaded with X5660s completely outclassed my Haswell-EP 12-core Xeon, at the cost of about 170W more power draw. 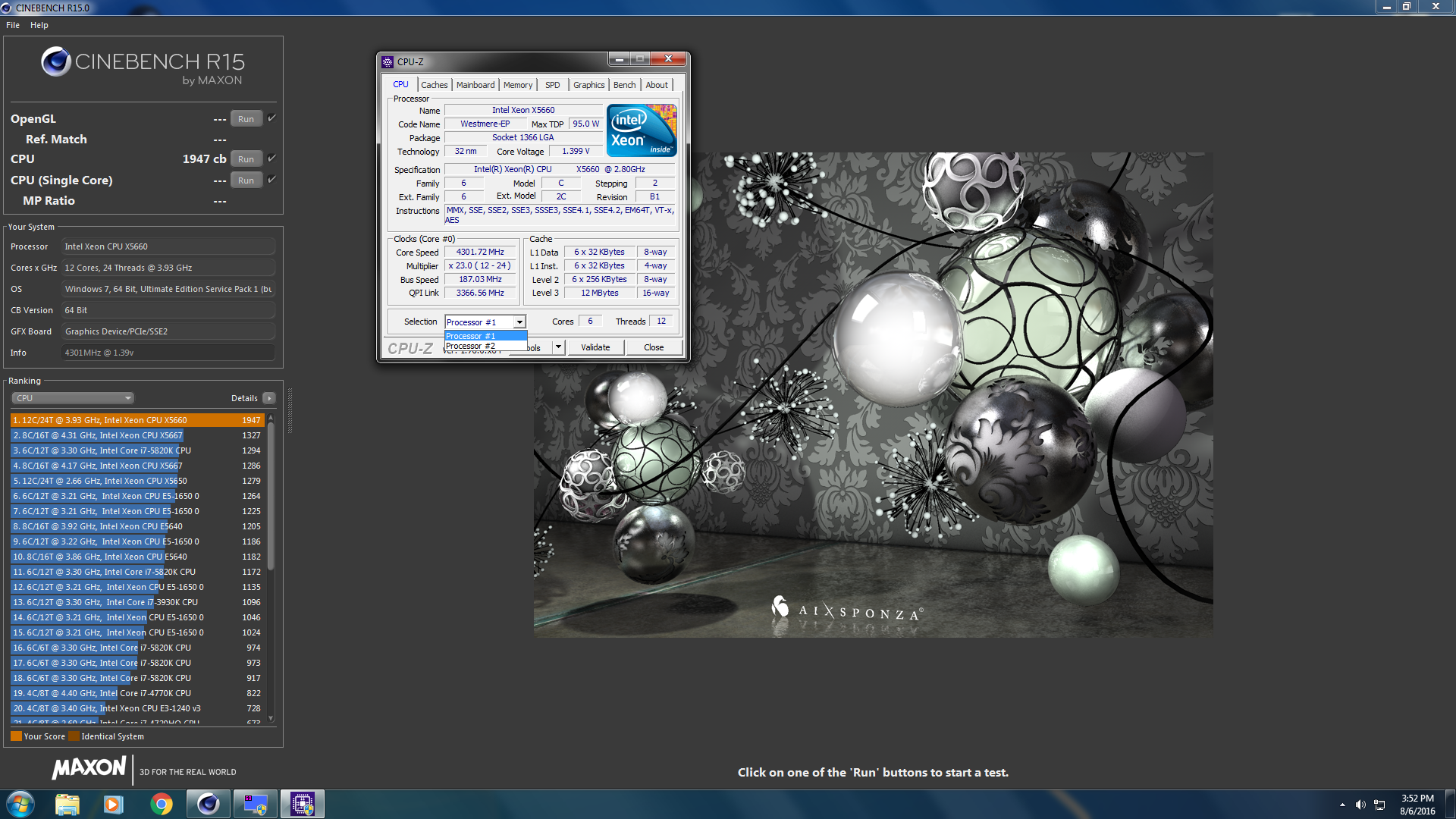 Many consider X58/Westmere to still be completely competitive to newer platforms, and despite some missing features they aren't wrong. If you get a good price on a board ($300 or less, $75 or less on a pair of CPUs) this can easily become the multi-threaded badass of a machine you want.

Things to keep in mind about the SR-2:

Once it's up and running it's a fun bastard of a board. The board that preceded it is the Intel Skulltrail. They were significantly more expensive at launch than the SR-2 and were launched right at the end of the Core 2's release cycle.

true
the hwbot rankings show only something like an e5 2690 V3 can compete with the Nehalem chips, at least in CB
http://hwbot.org/benchmark/cinebench_-_r15/rankings?start=14&cores=12#start=0#interval=20

I just pointed out the newer CPUs for the price... as SR-2's are really expensive on eBay now :P

If I were to buy it, it would be running windows for gaming and such, so linux and sm support doesnt really matter. But the nic problems are a bummer. But thanks for the run down :D

It's a worthwhile board. I forgot to mention that you will want to get a pair of chips with a high stock multiplier. 2.66GHz+ are preferred as the FSB on the SR-2 is pretty much hard locked to 200MHz. After that you will start getting massive audio distortion.

If gaming is your only concern, maybe look at a pair of the quad core CPUs like the X5667 or X5677. They have a very high stock clock, are usually very flexible to overclocking (4.5GHz+ in many cases) and will require a much lower FSB to get running fast, alleviating memory parity and audio issues.

That may be a better idea, 8 cores is more than enough, but I think that if you buy a SR-2 you should go for 12 cores, maybe even the X5690s, but they are kind of pricey, but i still think it would be really noice and worth it, the SR-2 deserves that in my eyes.

Edit: I do know that the X56XX cpus are more or less the same but clocked differently. I also just saw that there are X5698s, it's a OEM only CPU clocked @ 4.4 Ghz, that would be the dream, but systems with it on Ebay are like 1000$ :D

The last time I checked the X5698 does not work in the SR-2 with two chips installed. While it has the necessary QPI links for multi-CPU interaction, the board itself lacks support for the specific microcode of the X5698. Don't know if there was a resolution to that issue, ask Bogmali on TechPowerUp's forums.

Honestly, any chip over 2.66GHz stock is going to overclock around the same 4.3GHz - 4.5GHz. Just get what you can afford and have fun with it.

Oh, that's boring, I'll ask the guy. Probably both easier and better to buy the cheaper ones like X5660 or 70 and be happy that you even got to buy them :D

Some chips are so cheap that it's worth just throwing them on to overclock as far as they go. When I got my SR-2 I had a pair of E5640s that I got for $7 total a few days earlier. Pushed to 4GHz they were outperforming an i7-5820K in both multi and single thread. Really, once you have the board it's just all fun and games. 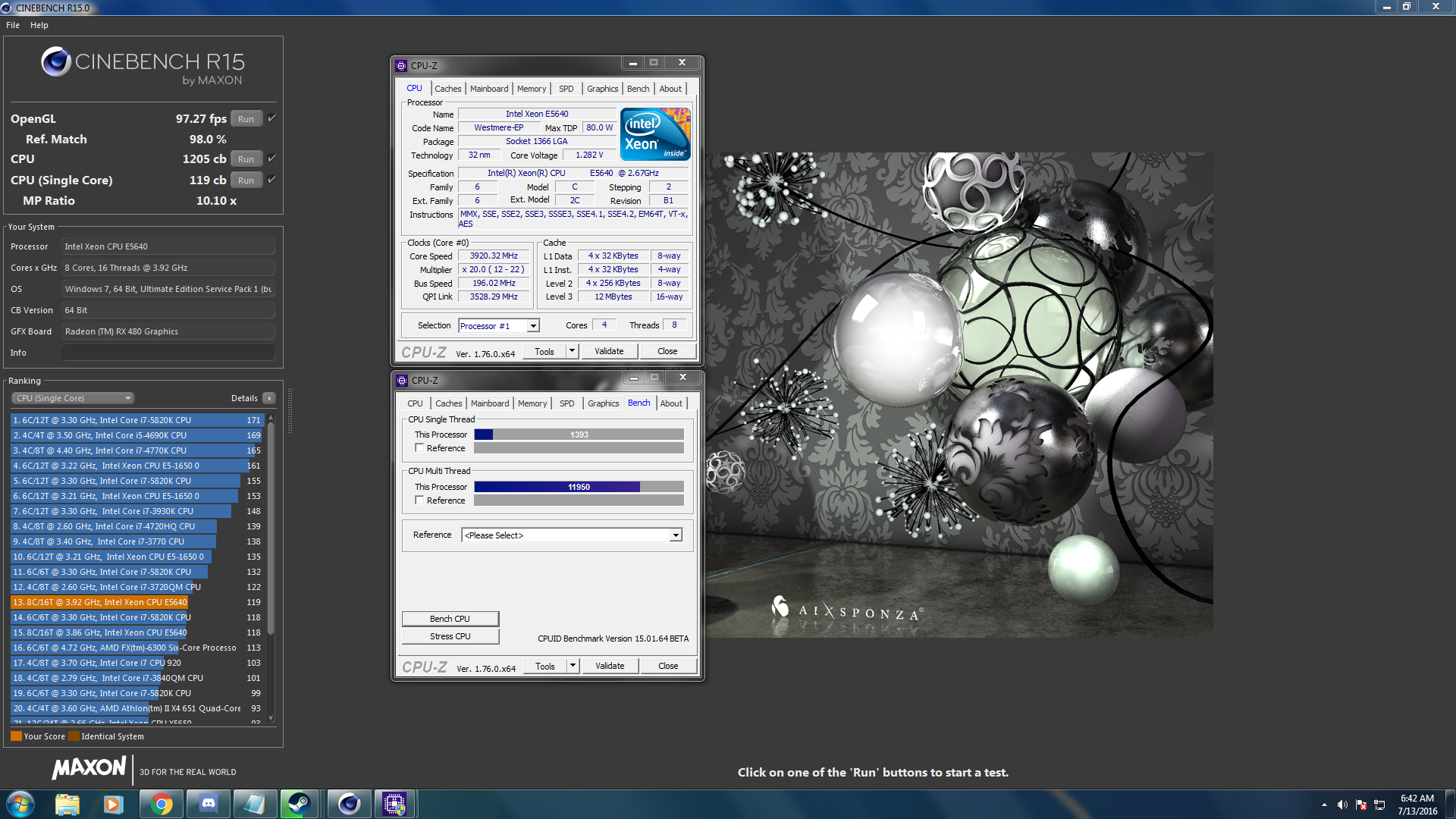 Damn that's a really good deal. I'm more or less thinking of doing the same thing, just buy a bunch of cheap cpus and overclock the till they break :D But still have a pair that are the "Main" ones.

And also do you have anything on what people mean with that the board "breaks" easy? like is it easy to break by hand or does it die due to heat and such?