Hi all, I just recently got a cable crimper to fix some issue cables at home. One cable worked fine, wired up with T-586A standard, going between a laptop and switch. However, the cable going between my switch and access point is a different story. I went to wire up as cross over, T-586A one side, T-586B the other. Didn't work at all. So I went for a straight through with T-586A both sides. Still didn't work. Then I looked at the configuration of the original plugs, and saw both ends were T-586B. So I tried that on both ends. Lo and behold, it works. Which confused the hell out of me.

Does it matter if the straight through wiring is T-586A or T-586B on both ends? Because from that, it seems like it does. But from things I've read, it shouldn't, just as long as the pin outs are the same at each end for straight through. Could I get any insight into this?

If both ends are the same it doesn't matter. They could be all black wires as long as both are the same pin to pin.
I'd guess you have a bad connection in a crimp.
Can you check continuity end to end with a multimeter?

I have no multimeter or testing tools yet, sadly. It could simply have been wires not making connection to the pins in the plug, but I have no way of knowing now that I've re-crimped it, but it's working after re-crimping to the other standard

Ports these days are auto-sensing. You do not need to have a crossover cable.

Just wire them to the same standard (B). Nothing hardly uses the 'A' standard anymore, pretty much everything (99%) is 'B'.

Also, get a cable tester, because if you crimp both ends and it doesn't work then you'll have to redo each end again because you have no way to check which end is bad.

And yes, each end has to be the same for the cable to work (except for a cross over, which isn't used for uplink ports anymore, though you may find this in the wild for legacy stuff).

Just remember it is always the "white-" one before a solid color.

get a tester. i have this one and it works and is cheap.

Features: Following are abnormal connections: If one cable, for example cable NO.3 is open circuited, the two NO.3 lights of the main tester and remote tester will not turn on. If several cables are n ...


alternatively you could make your own

I have noticed that no matter the standard, it's always alternating between solid and striped

get a tester. i have this one and it works and is cheap. 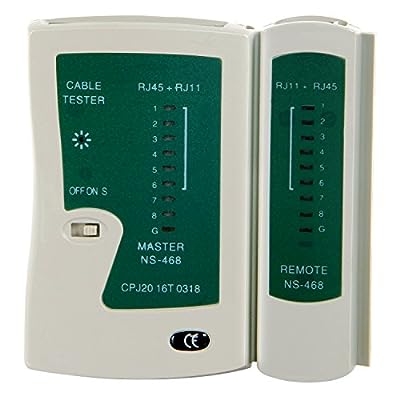 Features: Following are abnormal connections: If one cable, for example cable NO.3 is open circuited, the two NO.3 lights of the main tester and remote tester will not turn on. If several cables are n ...

Might have to import that one. The cheapest I can find locally (NZ) is like $40NZD D: